It’s May 2011, and Alec and I are at the Mull of Galloway, the south-western edge of the Scottish mainland. It’s the penultimate station of The Road North, and here we’re following St Medan; there is a ‘Kirkmaiden’ on both sides of Luce Bay named after her. Medan is a difficult figure to pin down. Her dates are uncertain, even her gender is disputed. Different identities are concealed in ‘her’ name. 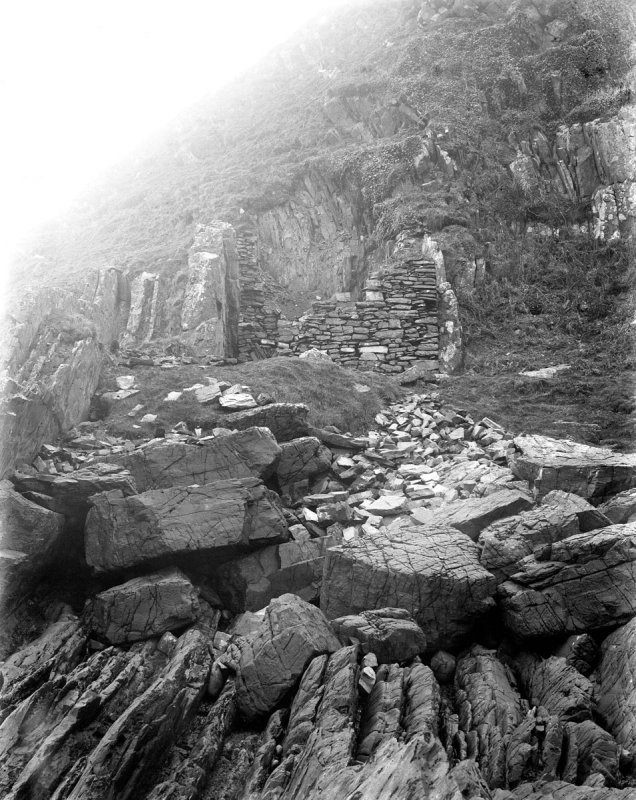 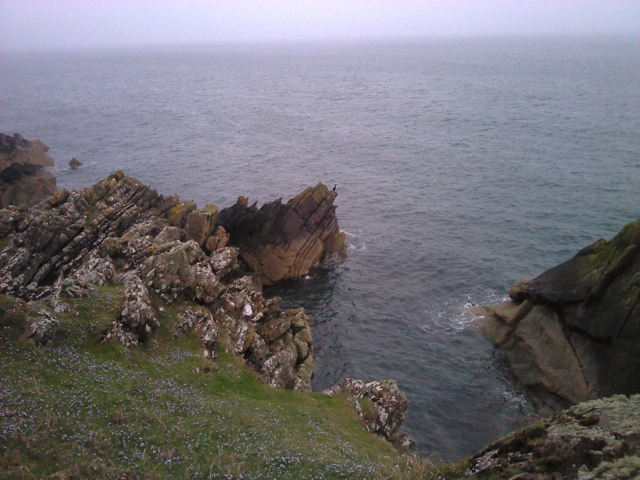 photograph Ken Cockburn, 2011
/
/
The most famous story tells of Medan fleeing an unwanted suitor, and how she managed to escape across the bay on a miraculous stone.
/
/
Yesterday at Monreith to the east we’d tried and failed to find ‘St Medana’s Well’, marked in gothic letters on the OS map; today, on the west side of the bay, we’re hoping to have more luck with the similarly Gothic ‘St Medan’s Cave and Chapel’.
/
But we’re having a job finding it. The map-marked path runs fieldside, with a steepish drop towards the shore on our right. Alec descends a dragon’s back of a ridge, but I stick to the main path a bit longer, then descend among wildflowers and snails to the rocky shore. I catch sight of Alec, but get a thumbs down from him as the swifts fly between us, and I certainly haven’t come across anything cave- or chapel-like.
/
I clamber back up from rocks to a grassy slope, heading back now, thinking it can’t be any further on, and that’s when it reveals itself; the remains of a drystone wall against a natural cliff, that combination of natural and stacked stone once forming the chapel. The cave is at very the back, blocked with a iron gate a spider has webbed; that low cavern presumably being Medan’s original hermitage the chapel was a later extension to.
/
It’s bleak and chill here, even in May. Hardly somewhere to dwell; but a temporary shelter, a retreat, a place to get your thoughts straight before returning to the world.
/
Ken Cockburn
/
/ 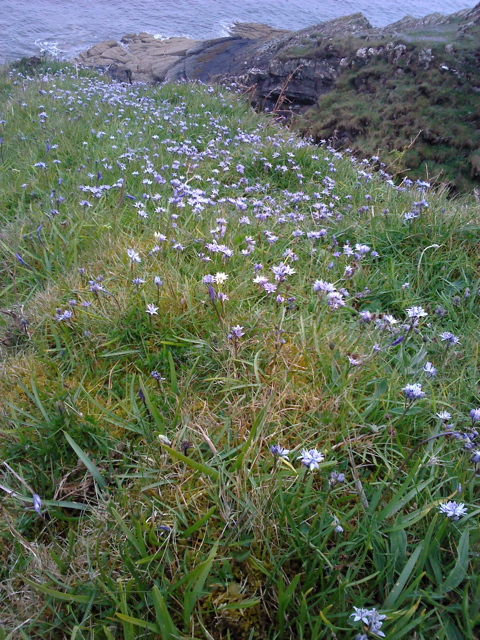 photograph Ken Cockburn, 2011
/
/
I recall that day on the Rhinns and Machars well.
/
As we walked along the grassy cliff-top, Ken shared some reading he’d been doing, from a history of Galloway, and, for the first time, I understood that the caves, shelters and hermitages we had visited on our journey through Scotland were rarely, if ever, intended for one person, or a lifetime’s retreat.
/
Of the figures we now know as saints, many were powerful – some were administrators, others leaders who wielded political influence – and directly involved in world affairs. The rough caves and modest cilles that they withdrew to may be remnants of a practice of temporary retreat, prayer, meditation, fasting, recovery and renewal.
/
/ 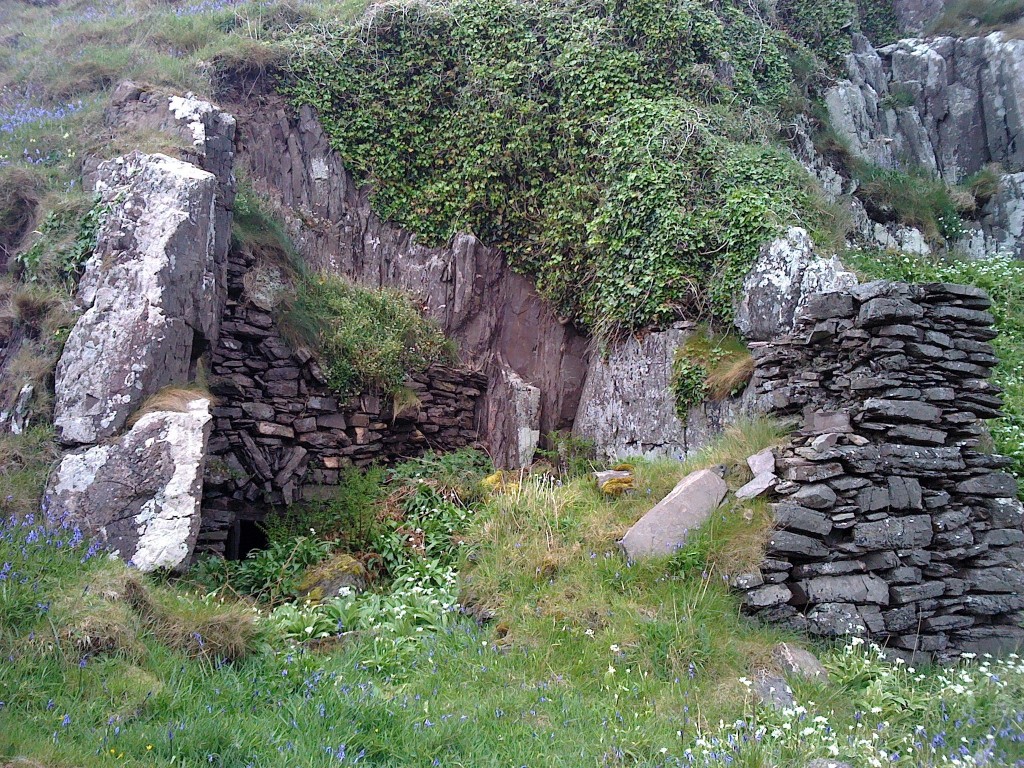 photograph Ken Cockburn, 2011
/
/
Like Medan, Suibhne is a figure we know little about. Our choice of location for the bothy dedicated to Sweeney coincided, by good fortune, with the furthest leap that he made on his journey through the wilds of – from Roscommon, Slieve and Slemish, across to Ailsa Craig and on, by further mythic leaps, stotting through the Gaeltacht to the Hebrides, as far as Eigg, our chosen location for Bothan Shuibhne.
/
/ 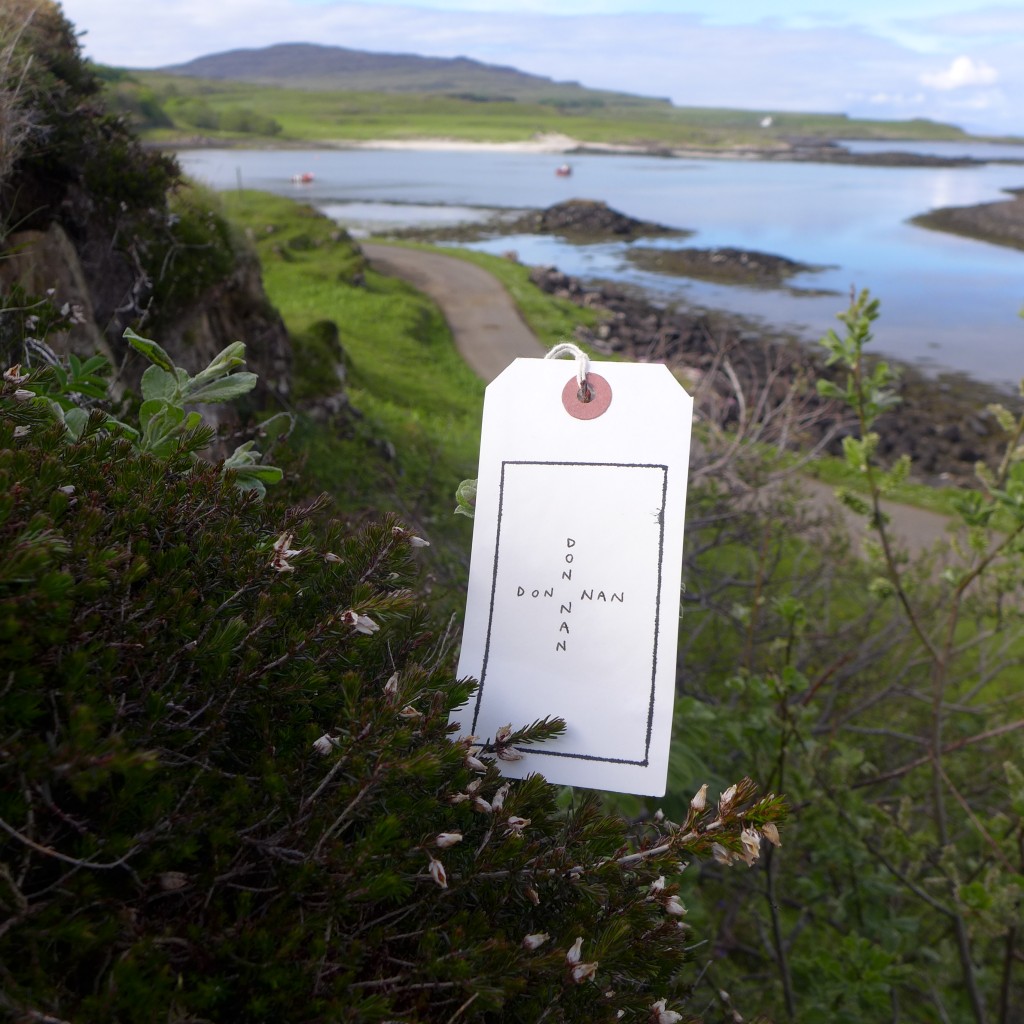 poem-label Alec Finlay, photograph Alec Finlay
/
/
Seamus Heaney’s translation, Sweeney Astray, has him sheltering for 6 weeks in a cave on the island, hosted by Donnan, who is still remembered in the name Kildonnan.
/
We do have some of Suibhne’s poems, and accounts of his life in verse and prose. The portrait that they sketch is dark and brooding: ‘I am a cave of pain’.
/
Sometimes the mad warrior-king is wounded by his bed of blackthorn and briar, in Glen Bolcain, at other times, when he takes to leaping, his wanderings bring him only discomfort:
/
/
A strait bed sprung with frost
straddles the barren rock
branches play bone
to wasted limbs
/
/
Suibhne’s blackthorn nest recalls the two sharp spikes of hawthorn with which Medan plucked out her own eyes, throwing them at her unwanted suitor.
/
/ 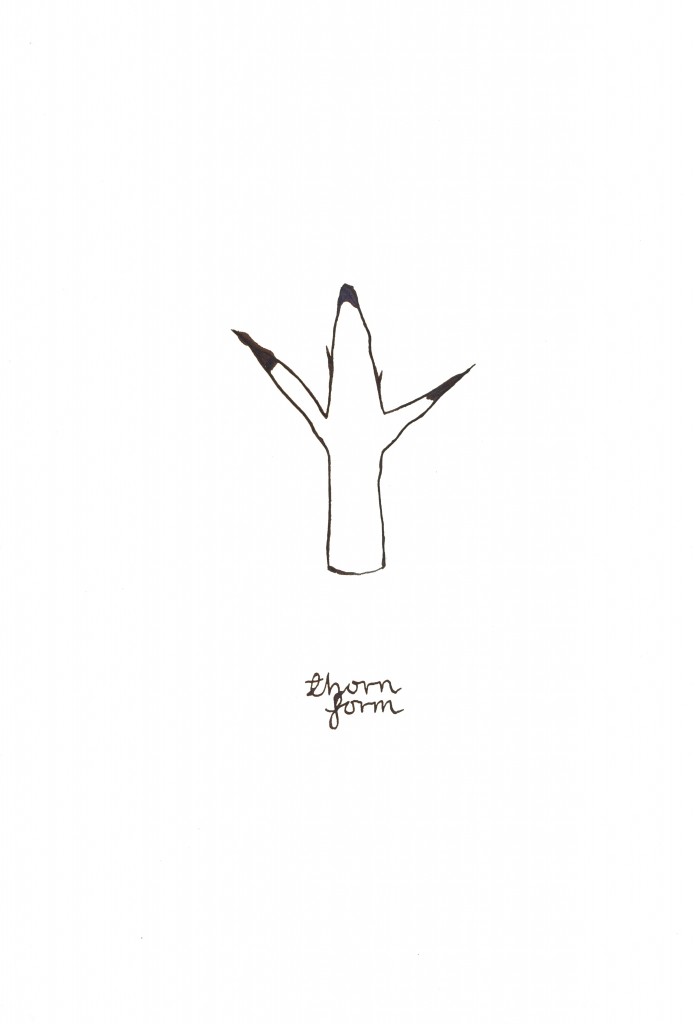 Alec Finlay, 2012
/
/
More recently, Ken sent me a poem from Patrick Crotty’s Penguin Book of Irish Poetry (2010)
/
/
Writing Out of Doors
/
A wall of forest looms above
and sweetly the blackbird sings;
all the birds make melody
over me and my books and things.
/
There sings to me the cuckoo
from bush-citadels in grey hood.
God’s doom! May the lord protect me
writing well, under the great wood.
/
Anonymous (Early Irish), trans. James Carney
/
/ 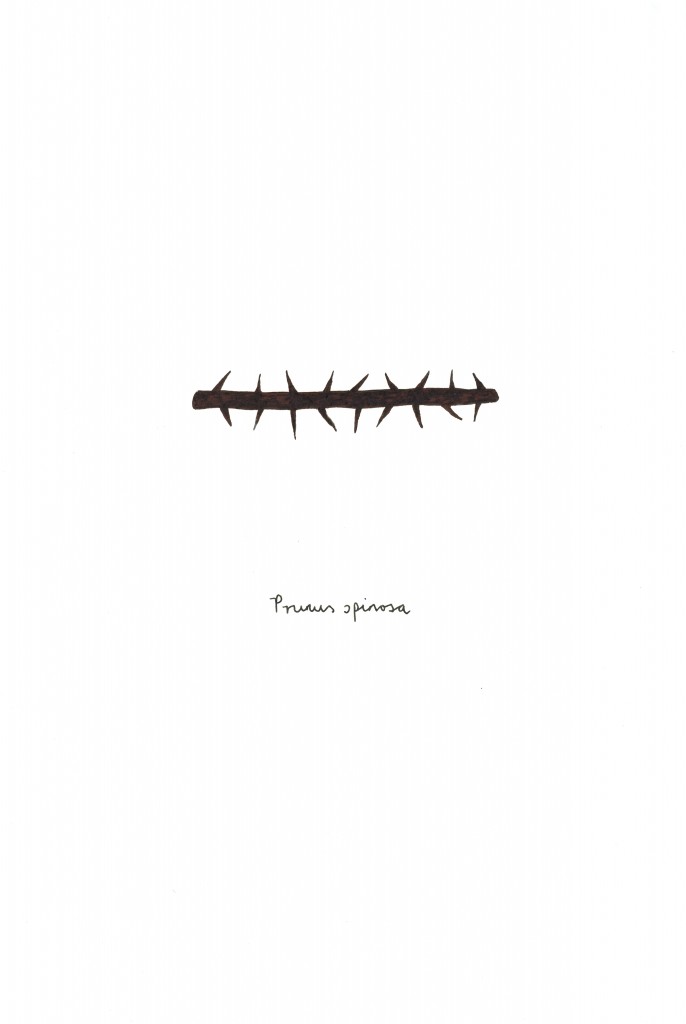 Alec Finlay, 2012
/
/
In the Introduction Crotty accounts for such poems as arising in the practice of the early Irish monks’ –their: “predeliction for composing in broad daylight to distinguish themselves from the initially pagan professional poets who pursued their craft in darkened rooms. The characteristic sense of the sunlit beauty of the natural world and sensitivity to changes of weather and season in Old Irish lyric have been understood as fortuitous consequences of that preference.”
/
Suibhne’s poetry is kin to this rich ecology. Like the cille among the rocks, Bothan Shuibhne is conceived as a temporary retreat; a bed and a desk among the wilds, offering people a few days apart, to be productive of poetry, art or music.
/
That last day in Galloway, our difficulties finding the chapel, the delays and diversions which lengthened our journey, became an invitation to appreciate the ‘sunlit beauty’ of the cliff-tops, drinking tea among a carpet of thrift.
/
/
(AF)
/
/ 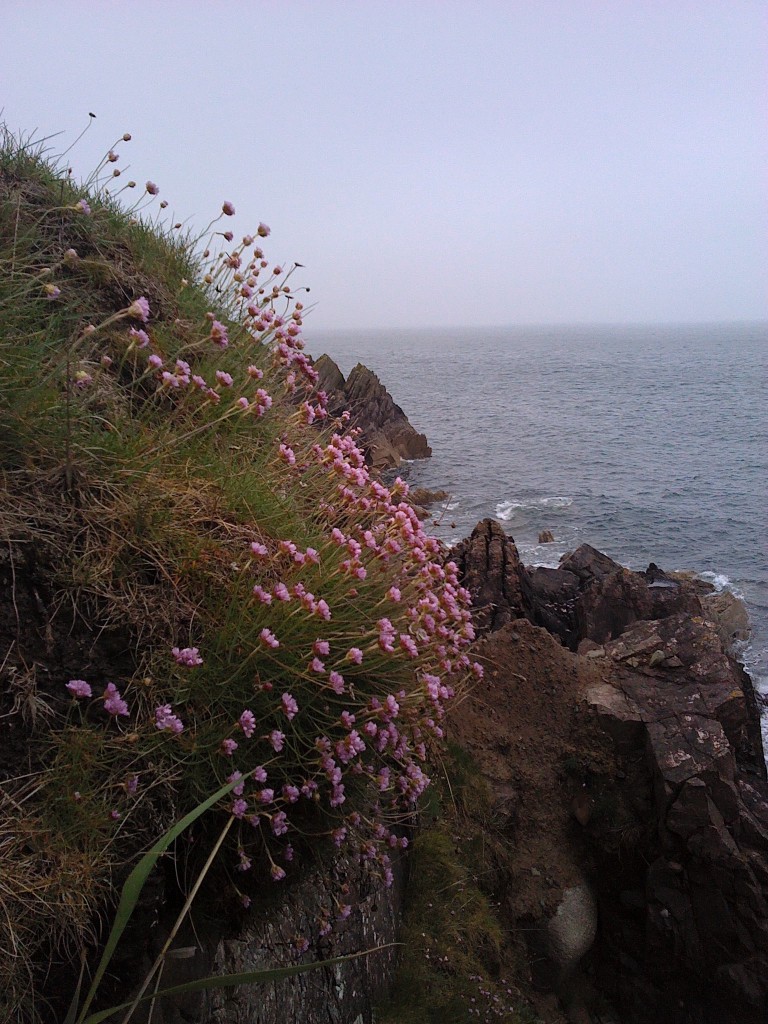 photograph Ken Cockburn, 2011
/
/
St Medan’s Cave & Chapel
/
(I) Ken’s path
/
I stayed longer on the high road
of the gorse path
/
I descended seeking a structure
among eroded cliffs
/
I speculated which rock
might be her schooner
/
I marked in red
for ‘cassock’ read ‘tussock’
for ‘saint’ read ‘snail’
/
I consoled myself
for a mystery withheld
in summer flora
/
I found the stones
when I’d stopped seeking
/
I smelled the air
heavy with star-white ramsons
/
I looked into the darkness
of her chosen retreat
/
I wondered when the mist
hiding the far shore
would lift
/
/
(II) Alec’s path
/
I chose my narrow way
marked by flowers and birdsong
/
I plunged down the dragon’s back ridge
in search of the seaside cell
/
I did penance for my haste
kneeling on a tussocky knoll
/
I was trapped for an hour
in the gentle pastorage
/
I clambered back over cliffs
found my way about the point
up through a chimney of rock
/
I lay down in a rich sea-meadow
suitable for spiritual growth
/
I restated my creed of sprawl and loll
christening this terraqueous ecosystem
/
///Medana
/
/
/
///The Lesson
/
I ask myself
if I had patiently sought
melliferous orchid, tormentil,
primroses, gorse and ferns,
bluebells, meadowsweet and thrift
might I have found the chapel
tucked away among the rocks?
/
/
(AF)
/
/
Bothan Shuibhne | Sweeney’s Bothy
/
Alec Finlay & The Bothy Project
commissioned as part of Creative Scotland’s ‘Year of Natural Scotland 2013’