To elaborate plans for a domestic labor zombie film: Why not? Let’s film it with the head torch on./ We put on full body tents to climb rocks in the rain./ Today might be all about tins and orange lentils and then trout appears at the table. But what do we do with it?

Lying in bed I am eating chocolate, drinking whisky and reading, beside me a small roof garden. One long stem taps out Morse Code against the mesh screen between us. What are you telling me? How to read rocks at the beach?

What is the focal length of a murky pool?

What does the lens of Massacre Cave see? 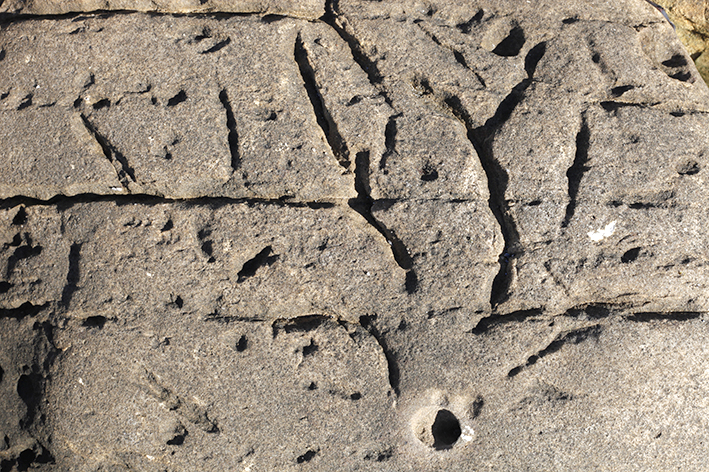 I read Maggie Nelson on Bernadette Meyer on domestic day to day. We make black bread, baked it in the wood stove. Now, I say don’t trust the thermometer. The inside is good though and eggs with fresh sage taste still better, here.

We wait for a patch of sun to shower.

Strip off and it is cold. It is cold but nice. 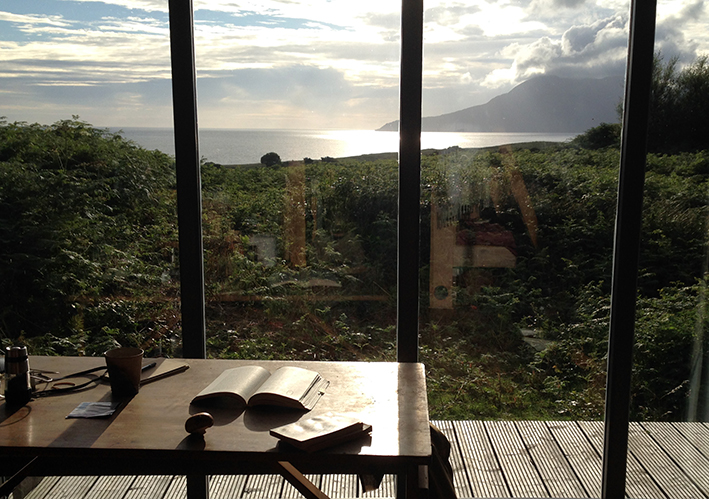 With zombie makeup we descend to the beach. A crab scuttles away and I want to think laterally. All minds wander, but how far? And with each evening the sky is an entirely different landscape or set of cloud mountains or fat air in pinky, white, grey blob explosions.

Let’s try climbing up this way and again we are lost, though never very far. 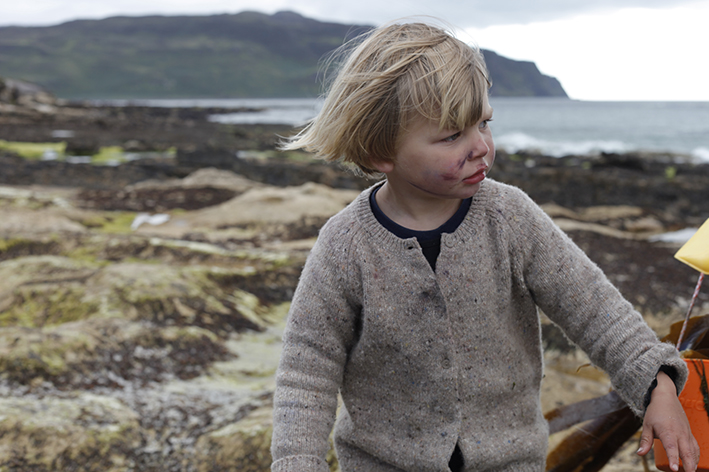 It is overgrown but move through it, anyway who is to say how much? While unfurling a thought at bedtime you may fall asleep but with few interruptions it can return. So many things to find and still surprised by the tethered dragon kite tormented by wind.

Our zombie makeup is poor but these mossy faces suit the beach.

It’s not over, we’re just resting- with oatcakes and cheese. 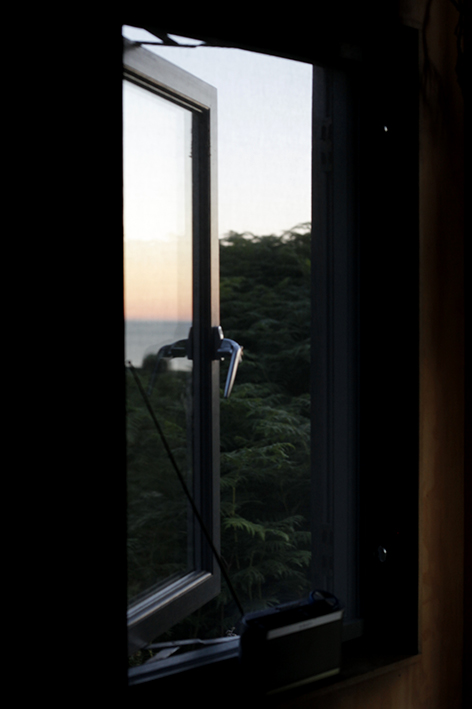 Sidhe Vicious. Had the first two photos in this blog entry been taken using a 35mm camera, I would likely be fretting about having them developed, such that they may reveal a dreadful ghostly apparition. They are pictures of burns at Bealach Clithe (above) and Cathalaidh na Marbh (below), along the stretch of road between the primary school and Cleadale, places where, in Eigg folklore, lone travellers – as I was when I took these photographs – may encounter the grimmest of all Sidhe. Appearing in the form of a little old lady, this particular Sidhe would be washing the shroud of the traveller who encountered her, in preparation for his immanent death. She is one of many Sidhe who shared the island with their human counterparts, but is the only one so specifically described. The Sidhe were believed to have been thrown out of heaven at the same time as Lucifer, but not deemed bad enough to be sent to hell. Instead, they were despatched to an intermediate world parallel to that occupied by humans, living in a state of perpetual in-between-ness. The islanders claimed that the Sidhe would occasionally intrude on human affairs to negative effect, primarily at times of transition such as beltaine, or during the birth of a child (a baby born disabled was said to have been swapped with a Sidhe, the ‘perfect’ version existing in the parallel Sidhe world). 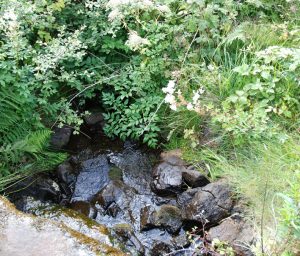 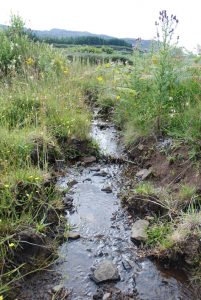 As I headed back to Sweeney’s Bothy after taking these pictures, I was reminded of another site that I happened upon earlier in the project that has brought me to Eigg: the Grotta delle Anguane, a cave just outside Bolca, in the Province of Verona, Italy. Bolca’s economy is heavily dependent on the nearby Pesciara lagerstätte, a fossil site containing the remains of tropical Eocene fish and plants, which is considered a national treasure by the Italian government. The fossilization process that took place there is interesting due to an unusual combination of factors: the specimens all died in con-catastrophic circumstances over many years; they sunk intact to the seabed, which was soft, allowing for a number of layers to build up through time; and the water was so salty and so lacking in oxygen at that depth, that the dead fish remained undisturbed by other organisms that might normally feed on their remains. This has resulted in samples that have been preserved in remarkable detail, including significant (sometimes entire) non-skeletal parts, and also in such abundance that they are still being mined today, almost five hundred years since the botanist Pietro Andrea Mattioli first made reference to them. It has been said that on their discovery they were believed to be the remains of the last supper, though the general hypothesis until the late 1700s was that they were evidence of the Great Flood. Since the 1600s they have been highly collectible, appearing in various wunderkammer and other public, private and royal collections all over Europe, culminating in a dedicated museum which opened in Bolca in 1996 (below). 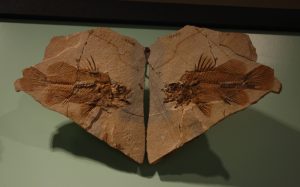 Eigg, of course, has also seen important paleontological finds, most famously a plesiosaur skeleton unearthed by the Edinburgh geologist Hugh Miller during a field trip in the mid-nineteenth century, and like Eigg, the geology of Bolca is also formed of volcanic activity. Over the week I spent in Sweeney’s Bothy I found myself thinking more and more about Bolca, despite having only been there for a single morning, as the modes of encounter and the natural histories of each place not only intersect so vividly with their cultural histories, but also with the natural and cultural histories of each other. In both places, as a tourist, one is encouraged to traverse the evidence of volcanic eruptions, and it is on descending into the limestone canyon on the western side of the basalt ridge at Bolca that one encounters the Grotta delle Anguane (below). 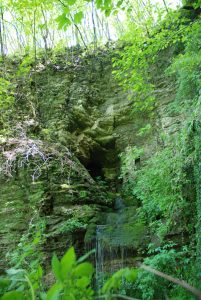 Anguane are Veneto’s equivalent of Eigg’s Sidheanan. They appear in female human or semi-human form, mainly around water and – particularly in the province of Verona – wash the clothes of the villagers in the streams in which they are seen. Unlike the Sidhe, Anguane are not portents of doom, being seen more as a representation of an earthly bond inaccessible to humans, so the villagers of Bolca would perhaps not approach the Grotta delle Anguane with same trepidation that a traveler might hold as he passed Bealach Clithe or Cathalaidh na Marbh on his way to Cleadale. The Anguane’s hold on the locals’ collective imagination was broken by the onset of the Counter-Reformation, which sprung from the Council of Trent (1545-1564), an event that coincided with the first written documentation of the discovery of the fossils at Bolca. The Anguane, along with other magical beings, were seemingly banished to the caves by Cardinal Carlo Borremeo during the Council’s third phase, where they would co-exist with the mysterious newly-discovered images that had appeared in the stratified limestone. The Grotta delle Anguane thus represents a strange and potent container of mythology, superstition, religion and science, the fossils being images of a time the villagers were unable to imagine, the Anguane being apparitions that gave form to a world that doesn’t exist, an imaginary world being discredited by a religion attempting to modernize and organize in the face of challenges from Protestant Reformers, a religion continuing to saturate the science of the site for at least a further century – the deep belief of the Council yet to encounter the deep time of the Scottish Enlightenment. 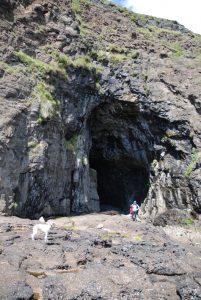 Like the Anguane in Bolca, the residents of Eigg have, on many occasions, found themselves banished to the caves that form an important part of the geology and subsequent culture and economy of their island. In Scotland, holding Catholic Mass became punishable by death in 1560, the year Borremo was made a cardinal, and two years before he convened the final phase of the Council of Trent. A letter to Mary Queen of Scots was the only attempt the Council made to implement its Counter-Reformation in Britain, but although the attempt failed at an establishment level, the islands were already resisting Protestantism, primarily because the clansmen continued to assert their independence from the Crown. On Eigg, the locals held illicit services in a cave on the southern face of the island, which became known as Uamh Chrabhaiche, or Cathedral Cave, the large rock formation on the left hand side being used as the pulpit and alter (above). Like the Grotta delle Anguane, Cathedral Cave is at the base of a volcanic rock formation, on this occasion the pitchstone An Sgùrr inselberg. A similar tourist walk to that in Bolca takes in An Sgùrr, Cathedral Cave, and a third site on the southern coast, St.Francis’ Cave, known these days as Massacre Cave. In 1577, a serious dispute between the islanders and the MacLeods of Dunvegan lead to Eigg being invaded by the Skye clan. On seeing the approaching boats, the islanders, knowing they were at a severe disadvantage, retreated to St.Francis’ Cave, which has a tiny entrance obscured by a waterfall, but an interior that could fit all 365 of them within it. The MacLeods searched Eigg for three days, but were unable to find the islanders, apart from an old woman who refused to impart their whereabouts. As they were sailing away again, they saw a lookout, who’d prematurely left the cave to check whether the coast was clear. The MacLeods returned, tracing his footprints to the cave. They diverted the waterfall, piled up kindling at the entrance to the cave and set fire to it, killing all those inside of asphyxiation. Like the fossils of Bolca, the skeletons of the dead islanders remained remarkably intact for many years. In 1788 the Revd. Donald MacLean visited the cave, observing that the bones appeared fresh, the skulls entire and the teeth still in their sockets, and a further six decades later the aforementioned Hugh Miler reported seeing human bones during the same trip on which he found his plesiosaur. In 1814, Walter Scott visited and took a skull as a souvenir to display at Abbotsford, though further tomb plundering was prevented a few years after Miller’s visit, the remaining bones being gathered by Lawrence Thompson, Eigg’s then proprietor, and – much to the anger of the island’s residents – given a Protestant burial. 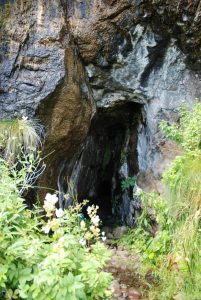 Although one does not encounter human skeletons when visiting the cave today, its narrow entrance (above) and dark, damp and foreboding interior comingle with its history to provide sufficient spinal chills the deeper one progresses into it. But to offset the potential disappointment that may be felt by the contemporary dark-tourist who expects something akin to the Paris Catacombs, somebody has kindly left an example of a bone next to the entrance, perhaps as an aide-imaginaire. It is juxtaposed nicely with a blue hardhat (below), perhaps signifying that there are health and safety lessons that can be learned from the events at Massacre Cave. With regard to the burns at Bealach Clithe and Cathalaidh na Marbh, on my visit, perhaps due to the season, there thankfully did not seem to be sufficient water flowing to adequately wash a shroud, even for a magical creature, so I’m pretty confident that Eigg’s bean nighidh Sidhe won’t suddenly appear as I upload the images to this blog. If there’s a glitch in either of the first two pictures when you look at them, please don’t get in touch to point it out, as it’s likely only you who can see it… 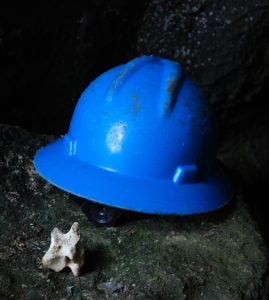