Kevin Langan will build a wild shelter at Jupiter Artland on Sunday 16 June; Alec Finlay and The Bothy Project will be there to discuss the Sweeney’s Bothy project. 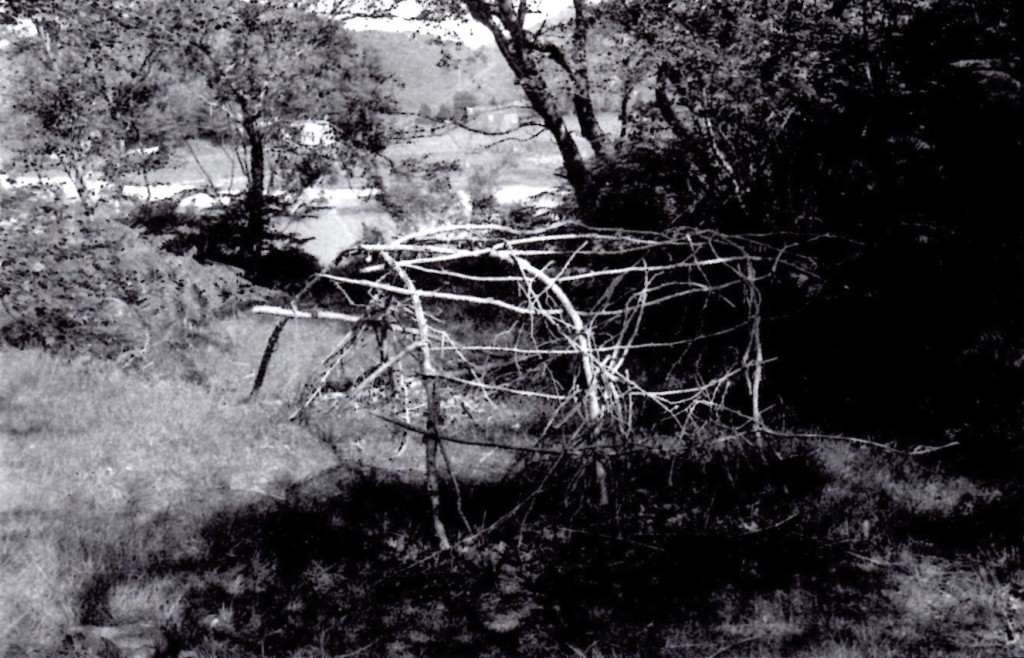 ‘When the yellow’s on the broom’, Adam MacNughtan, from a song
based on the life of the Scottish traveller, Betsy Whyte; yorlin, yellowhammer 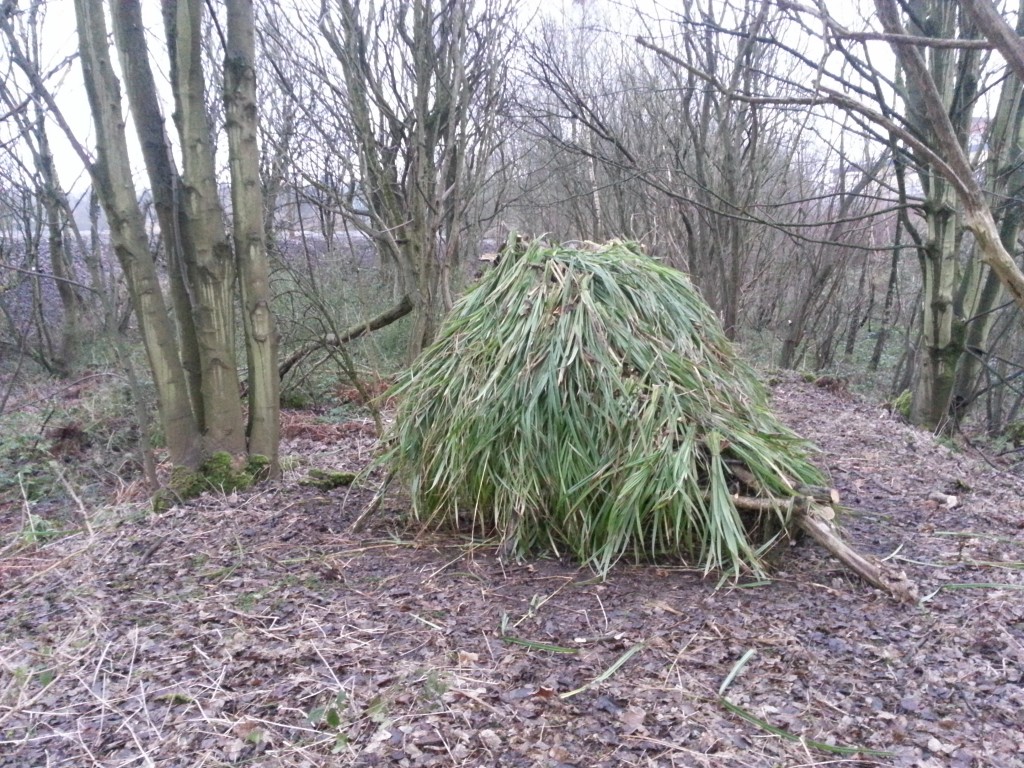 Kevin Langan makes shelters because he needs to.

When I tell Kevin that he’s an artist, he insists he is just an architect who knits together some branches and twine in his spare time, because he wants to sleep under the stars. And I reply, he has the knack of ingenuity, wedded to the need. What is this need: to construct a place to belong within urban culture, and, to set up a new relationship between urban and rural wildness, refocusing our perception of both.

Need and gist makes an artist, and, sometimes, not knowing that you are one, not even wanting to be one, is all the better. 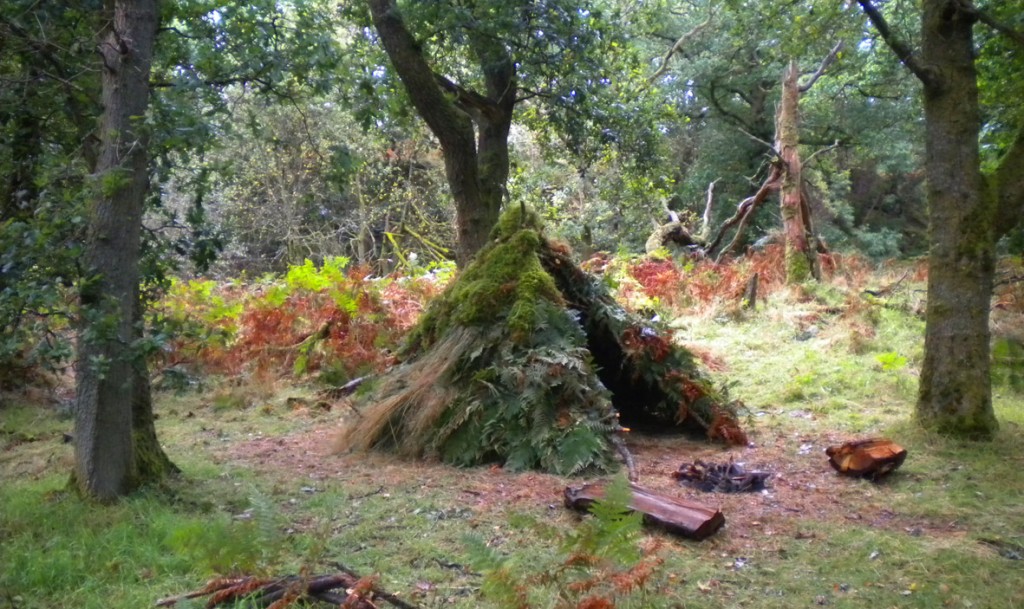 Kevin’s practice is something more than a hobby, and more than the skillful application of craft, though the shelters are well made and they stand up, so far.

He will build 100 wild shelters, sleeping in each one for a single night, because he needs to. It’s a kind of yearning and also a form of necessity

The structures may arise in his daytime practice as an architect, but they are not a series of formal exercises. If I had to explain the motivation then I suspect that the shelters have their root in his childhood in Argyll. They are a way to make sense of the city, setting down dens to hide in, among the honeycomb of street-lights and humdrum motion of cars. 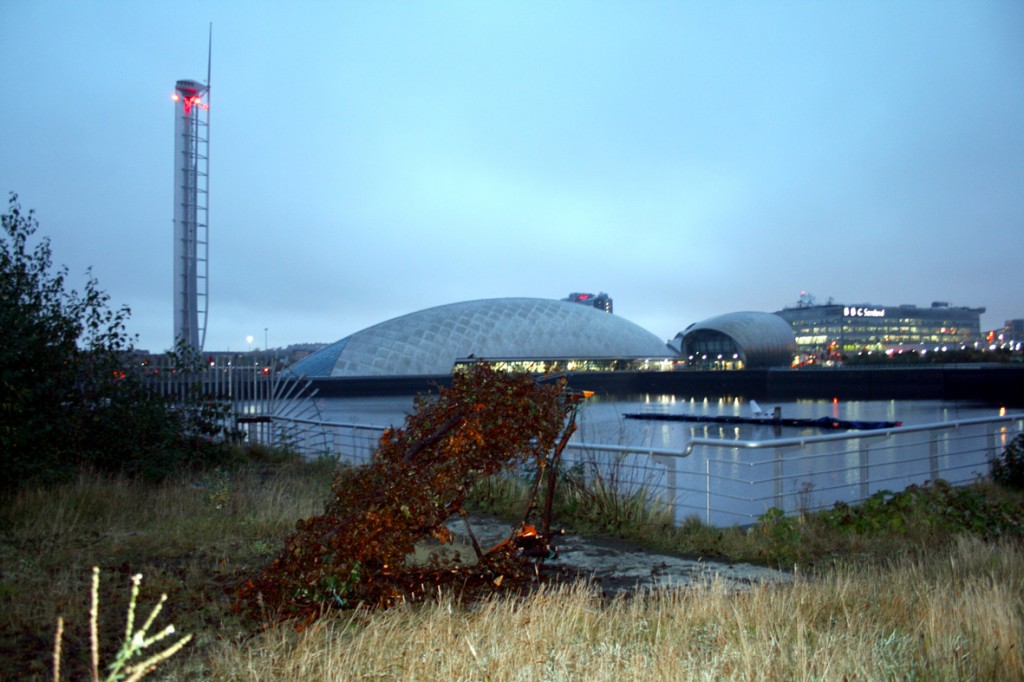 Each shelter sets down a mark; each mark defines a locale. Beyond their modest scale and camouflaged appearance, the shelters are defining if you know that they are there.

The wild shelters aren’t built to last; they are temporary, and Kevin doesn’t much mind if they are torn down. Already people are seeking them out, from curiosity, admiration, or fondness.

Kevin has built / \ under an overpass, in the gap between two buildings, on a derelict quay, in a dog-walkers park – he avoids beauty spots and rarely goes outside the city limits. 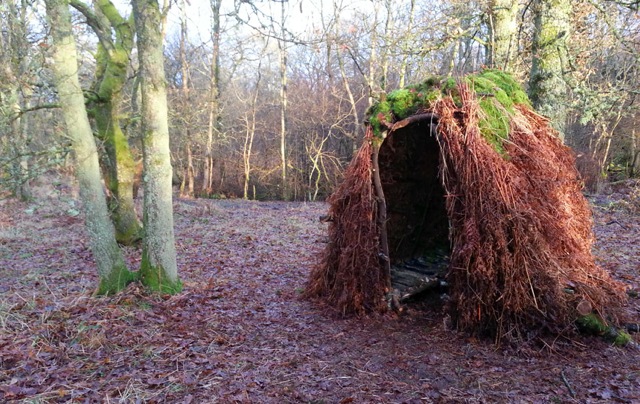 The fashion for walking and edgelands, pace Sinclair and Sebald, is a commonplace of our culture. Kevin’s shelters can’t be said to navigate the city, rather they colonize it, like cells.

His act is more daring and, in its way, more exposed, than the solitary and group walkers of psychogeography. Which of us is at ease with the idea of spending the night out of doors in the metropolis? The 100 wild shelters project invites us to consider if we would join Kevin, out there, in the dark, the frost, and the potential menace of a city after dark. 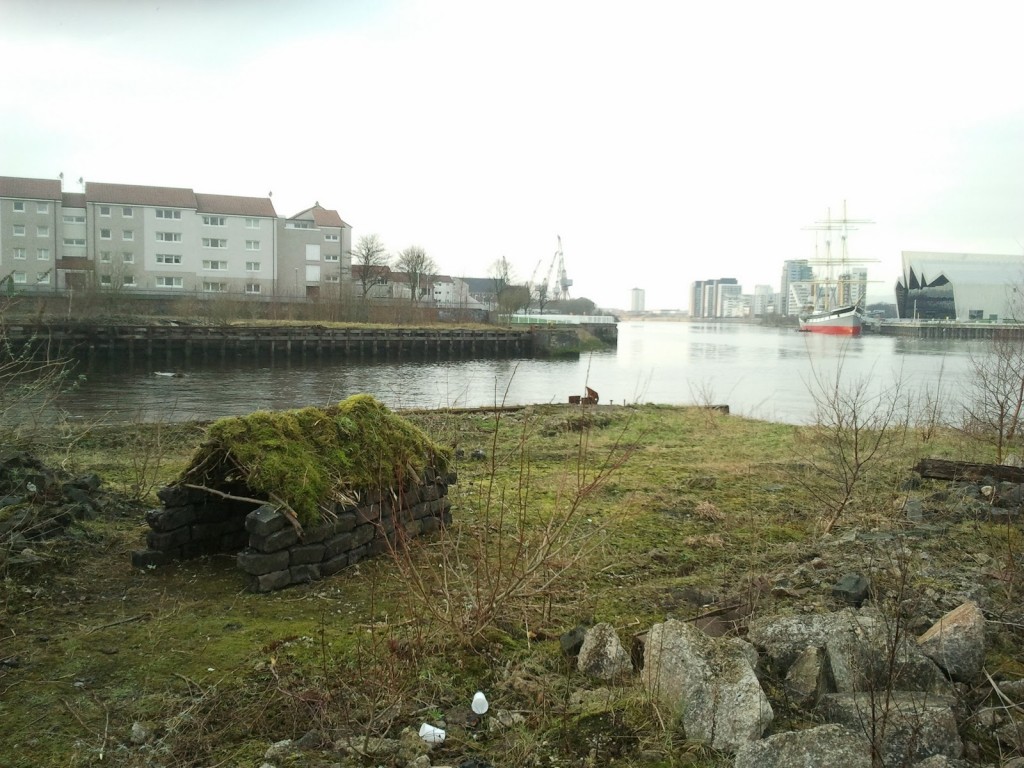 ‘built on any piece of ground that harbours enough natural resources; to sleep rough in each shelter for one night; to experiment with hut form, structure and materiality’.

Imagine him venturing into the city at night, what is it like? I did once spend a night in the hidden gardens, in the company of poets, writing a 24-hour renga – a collaborative poem – but we were safely secured behind gates and fences. I can recall the sounds though, between late night and early morning, the hum of the traffic lessening, and the first train of the new day.

Ask Kevin about the sites that he builds in and he will tell you about the hidden places, the clearings, cuttings and patches, where transport arteries, or house demolition, have incised the city’s fabric. Dark, dank places where elder flourishes, and you must tug your steps through fireweed and bramble, where, more often than not, he finds makeshift circles of improvised seating, crushed cans, bottles, and silver foil. These are the places the wild shelters belong. 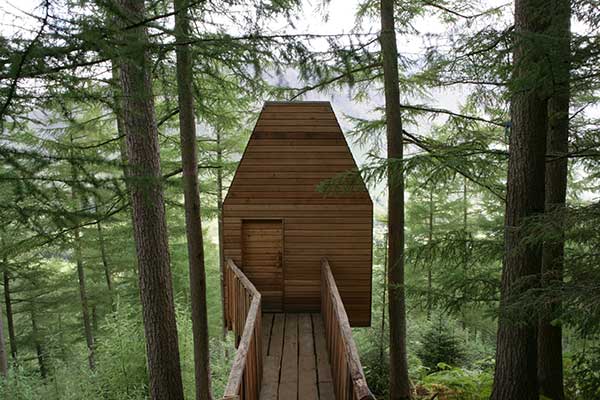 Recently I was discussing the shelter at Outlandia with Malcolm Fraser, and the conundrum of huts in Scotland; wondering why there are so few progressive designs, why such a lack of wooden huts. When I asked Malcolm where he would place a hut now, if he was to build another, he suggested that they could belong not smack in the middle of scenic landscapes, but in such forgotten places as old quarries – somewhere that has a view, but where the hut is also an act of ‘site repair’, to adopt the American architect Christopher Alexander’s term.

A protestor in a tree-shelter proclaims his precarious daily dwelling as a means to protect an oak from felling, or prevent a road from despoiling a city park or a glen. A hut may, by its presence and the requirements of use, redeem – Malcolm approved the term – an abandoned site, encouraging our attention to wounded ecology. 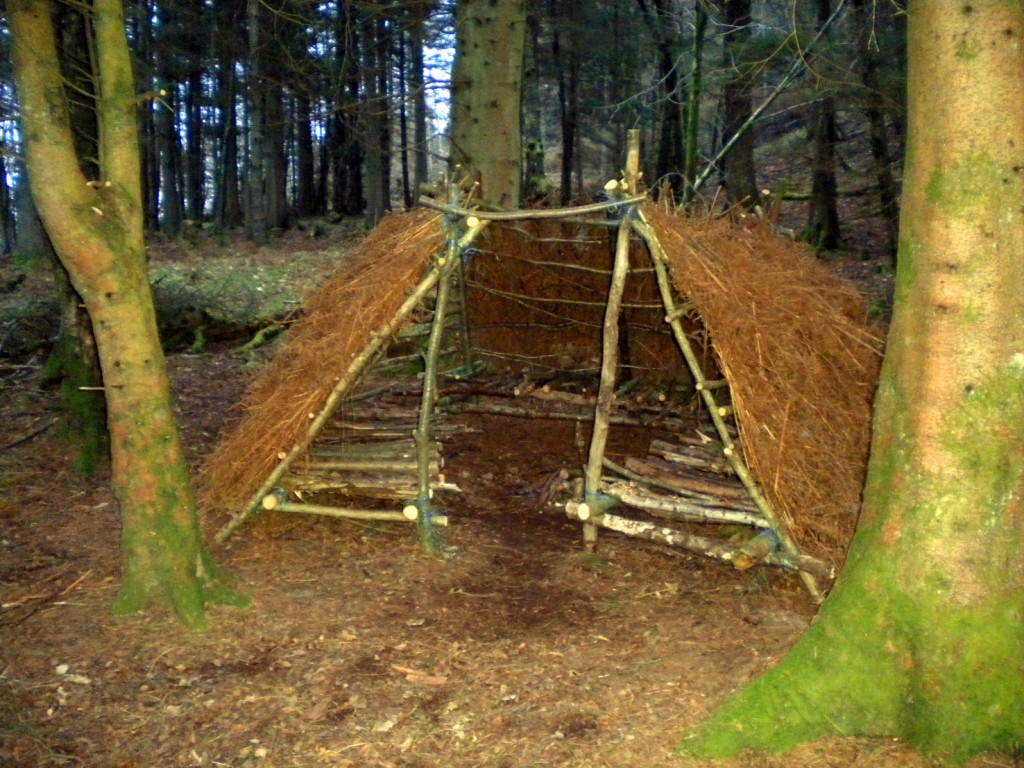 For all these reasons, I see Kevin’s project as something more than bush-craft and the wattle and withy ‘nature’ school; his shelters go beyond the worthy into something more edgy.

Each shelter has its own carefully drawn-up plan. The build, and the night sleeping – dry, wet, cold, or warm – is a true test of that plan, threading the idea through the eye of circumstance. And, as Kevin reminds me, a day spent ripping branches and tying knots will leave your hands blistered and bloody; it’s not all fun. 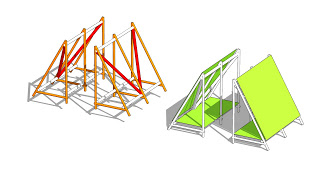 Together we are working on a bower: a traditional term, familiar from folk-songs and antique scenes, that I wanted to understand by seeing how one might be made. The bower will be built in a wood in Derbyshire, using local materials. 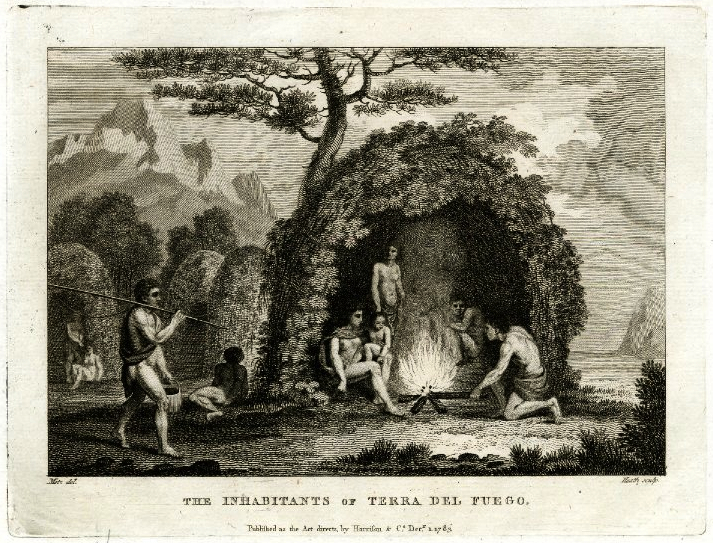 To shed light on the culture of bowers and shelters, I invited the art historian Amy Todman to select a range of structures, made from many types of material, from paintings, embroideries, and engravings. Together we compared these to ‘Langan’s lodges’ – you can see the illustrated essay here – and it was illuminating, to me, the way his shelters make real all of the ways people have constructed private shelters in the wilds, away from the eyes of the powerful, or censorious. 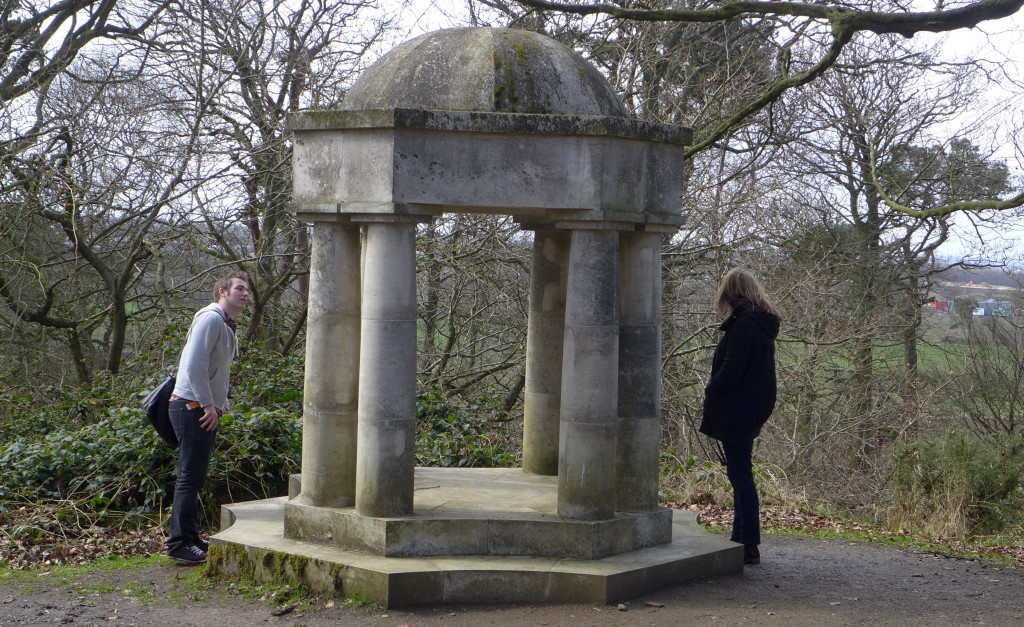 Full of admiration for what Kevin achieves with simple materials, woven together in a day, The Bothy Project and I were keen to involve him in Bothan Shuibhne. We have invited him to present a demonstration, a chance for anyone who wishes to come along and watch him at work. 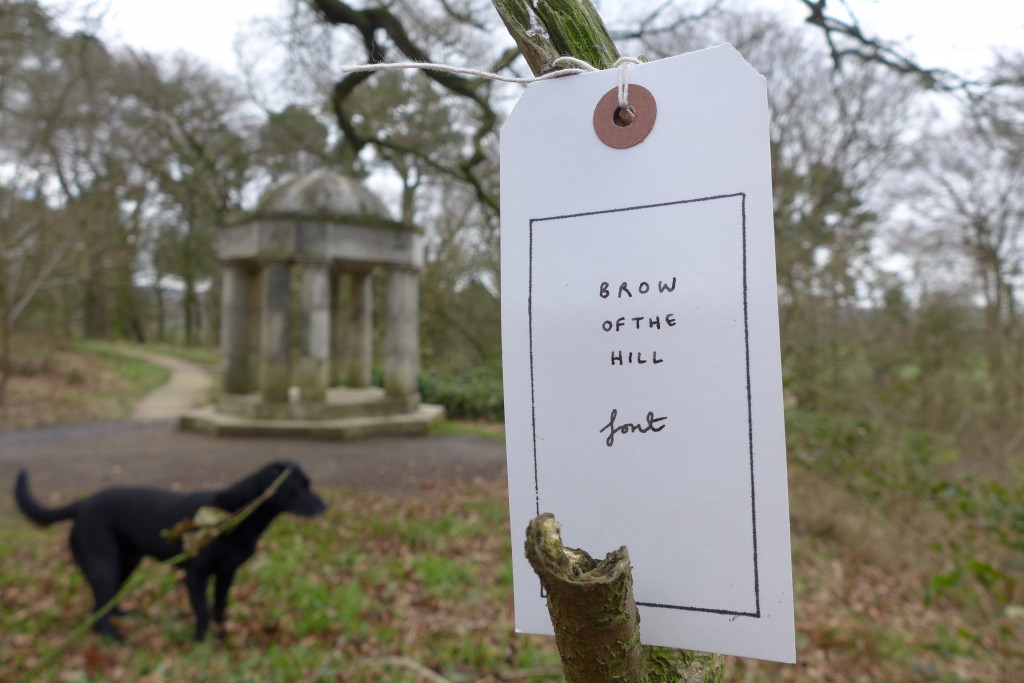 In this case the venue is far from the city. At Jupiter Artland the shelter will be set nearby Ian Hamilton Finlay’s Temple of Apollo. When I was in residence there Robert Wilson told me that he thinks of this little brow of hillside in the woods there as the ‘font’ of the landscape – the eye of its mind. 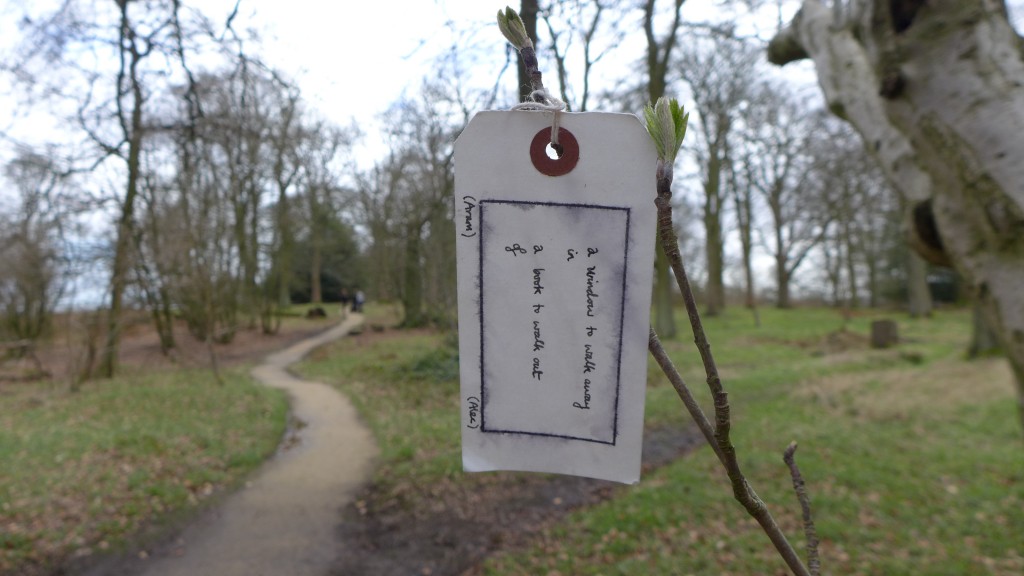 a window to walk away
in

a book to walk out
of

After that stay, when I walked the length of the wood each day, I composed a descrip-tion of this particular area for the road north.

on the font of the wood
IHF’s sun temple’s
dedicated to
that wild red youth,
Apollo-Saint-Just, incarnate
forging a revolution 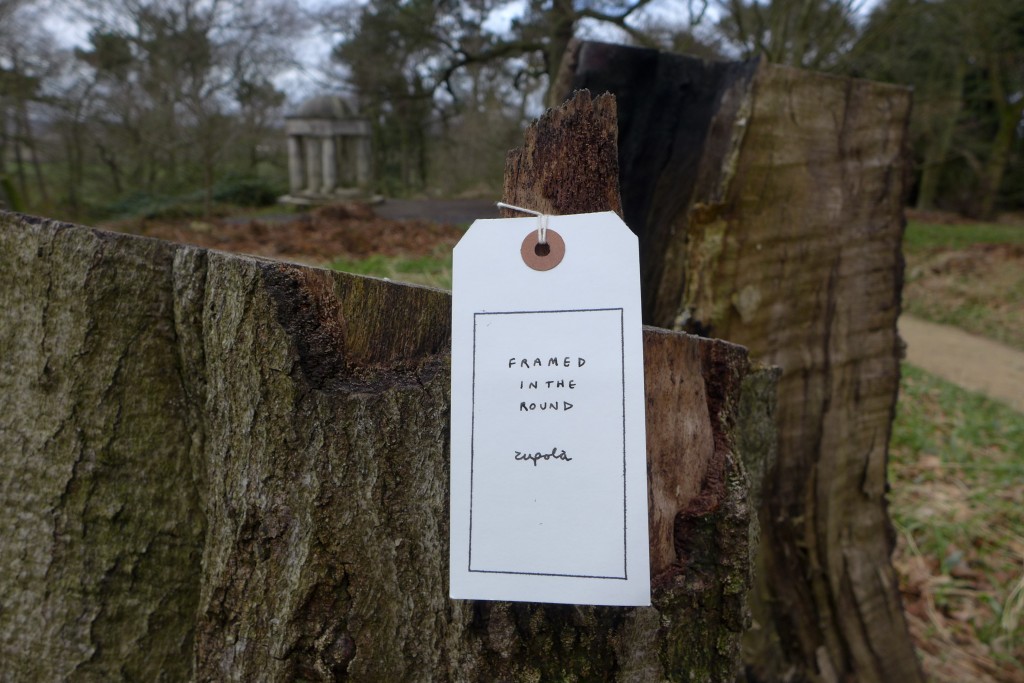 view of the Temple of Apollo, Jupiter Artland; photograph, AF 2013 ‘FRAMED IN THE ROUND / cupola’

The plan that Kevin has drawn-up adapts the cruciform of the temple and cupola, and reverses its appearance, seeking the closure of a roof, a shelter made from what is to hand, with no gold, no cold stone, and no azure sky. 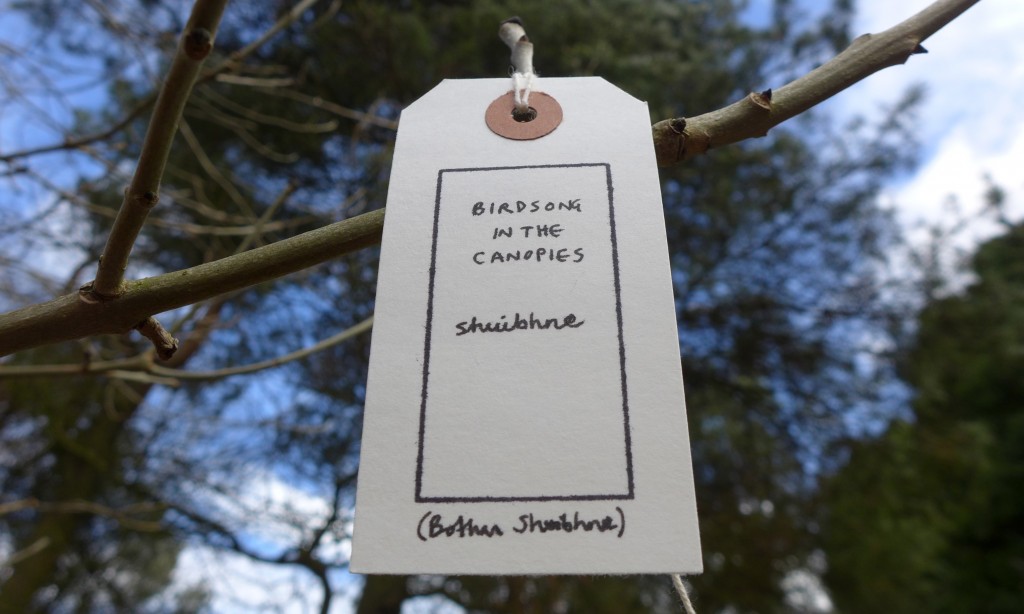 The measure of time is so entirely different to the temple, and yet they will still be twinned. 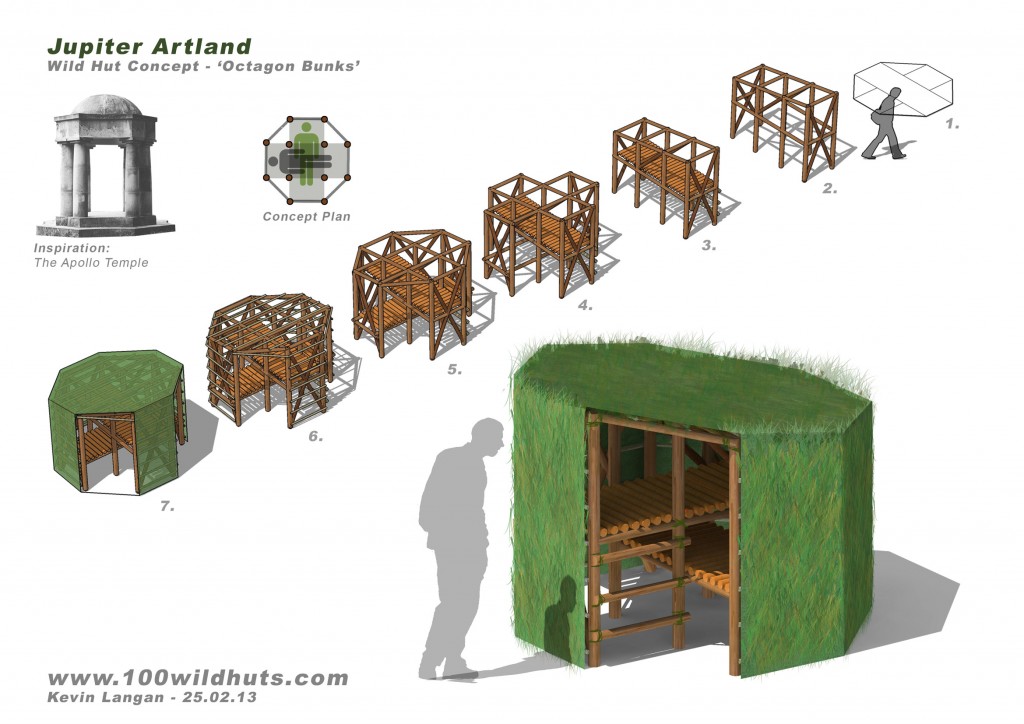 The site that I suggested to Kevin – and Diana, who is hosting the event – was at the very edge of the wood, beneath a shelf of rock, where windblown branches and coppicing is being dumped, among bracken, which I am sure Kevin will find a use for. 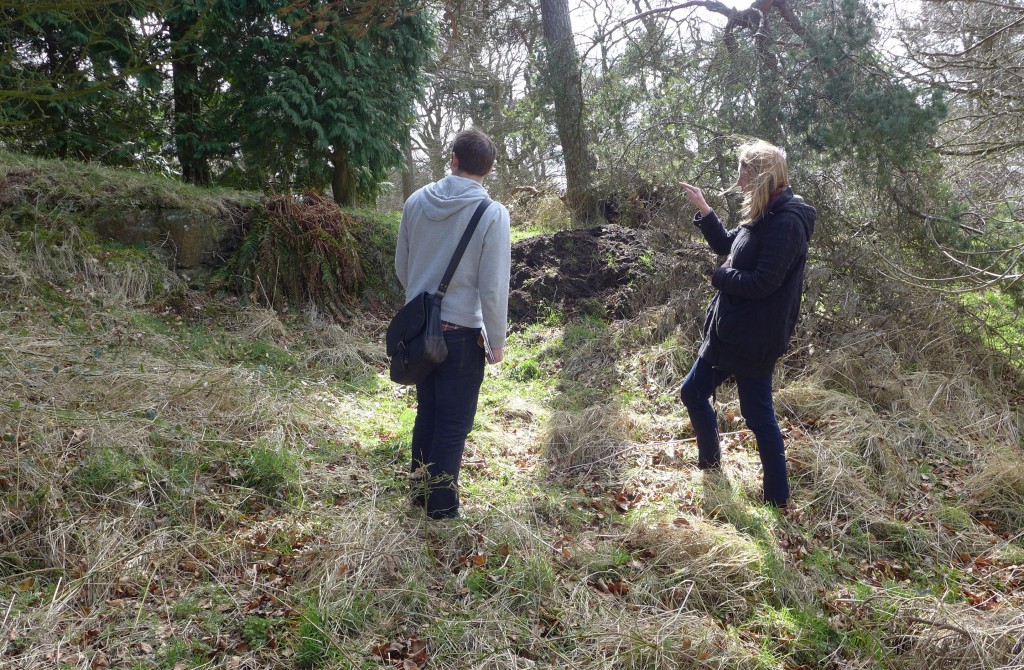 Kevin and I liked the idea of building where the rubbish was, and Richard, the gardener at Jupiter, admitted that he had always thought of this as the place he would build a den if he were 12.

Whether the shelter will remain, or be pulled down, we aren’t yet sure. 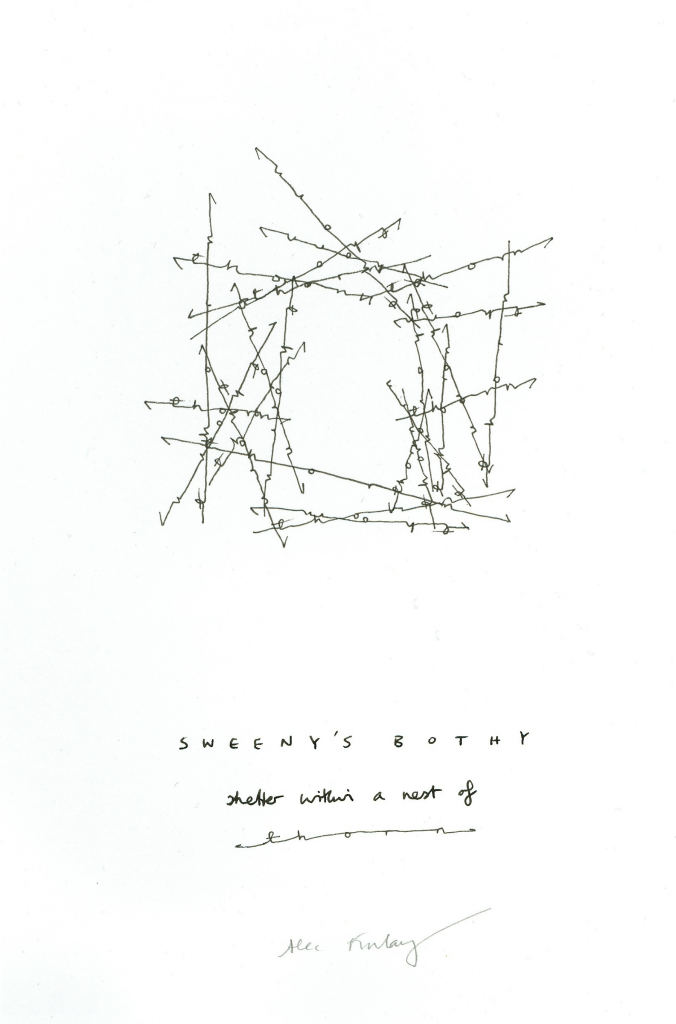