Being in The Dark. I’m writing a novel set at night. I’m at Sweeney’s Bothy, run by Lucy Conway, to observe my reaction to being alone in the dark. As part of my research I’m studying the phenomenon of urban light pollution. I’ve brought with me a sodium streetlight. This distinctive orange is being replaced by white LEDs and will soon be a thing of the past. I’m interested in how it’s experienced in unexpected contexts and will be switching it on in Eigg.

This blog documents my observations and a shift in my relationship with darkness, and light, during the period of my stay.

As I write my first entry, the setting sun makes a sundial of my pen. 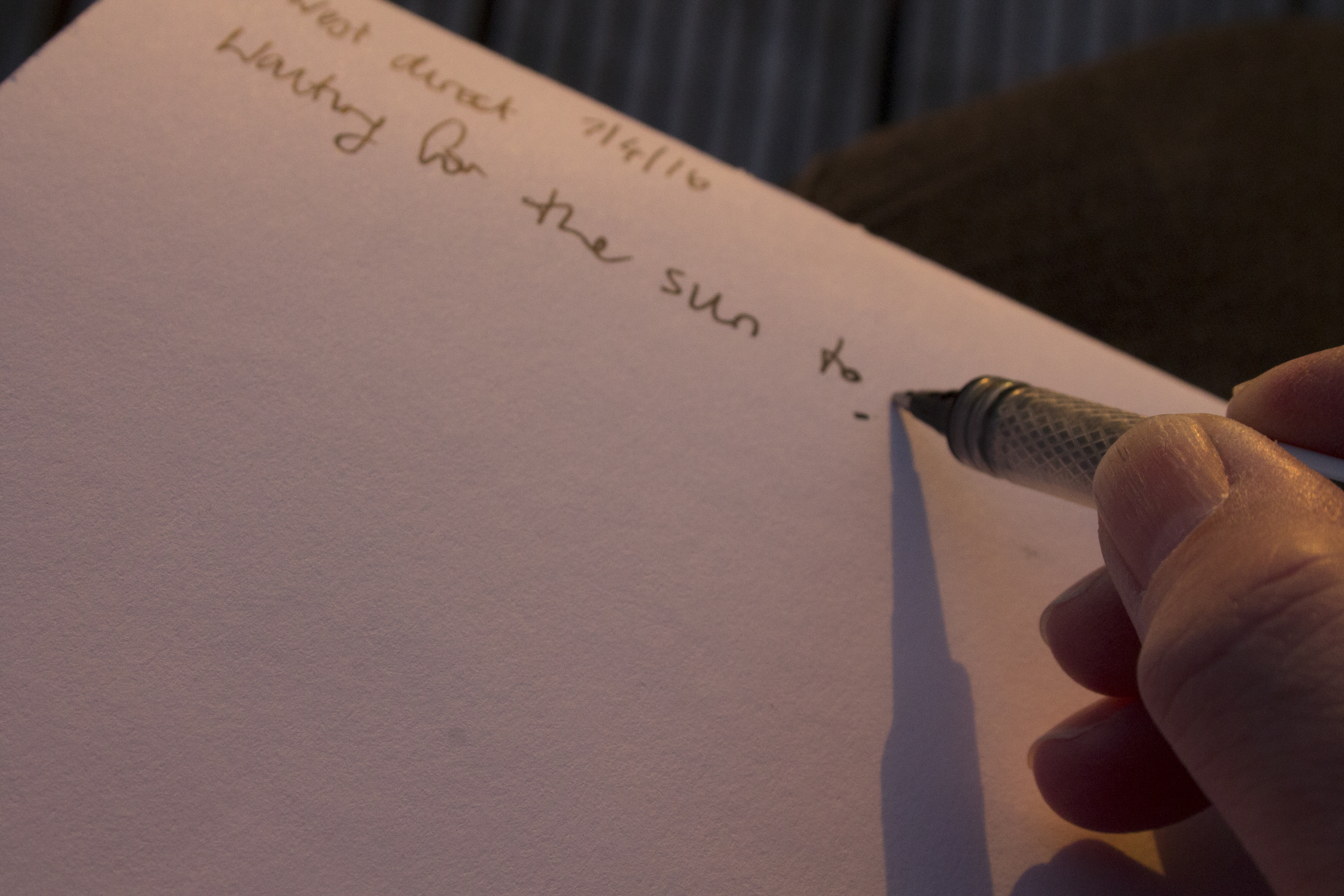 I’m not sure how long the electricity generated that day from the solar panels will last, so I only put on a couple of lamps. I photograph the outside from inside the bothy reading recess and glimpse myself in the corner of the reflection. The room juts out into the night and I am unseeing while being seen. 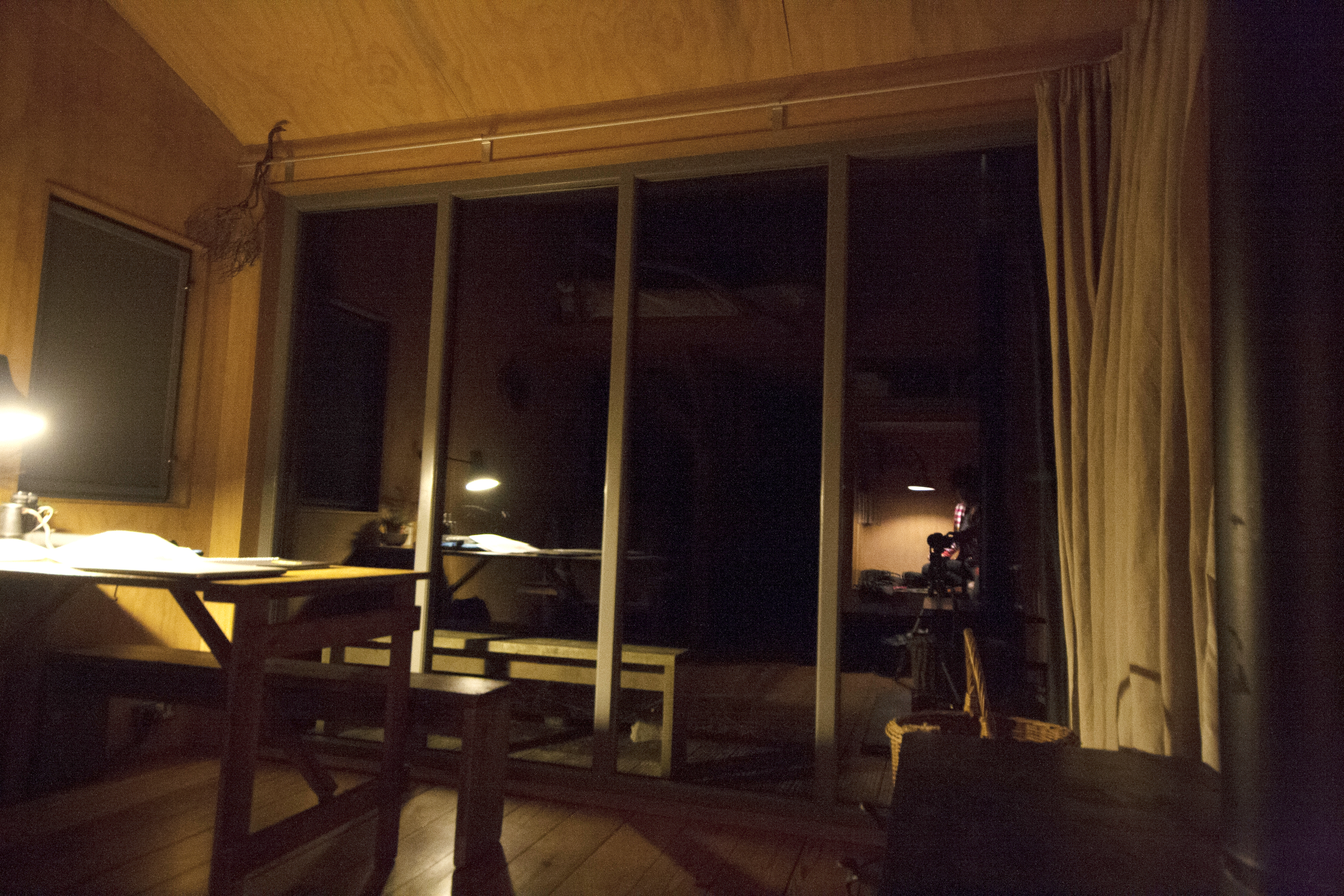 The feeling passes. I switch off the lamps and set the camera up at the window. It stares out and registers things my eyes can’t see. I sense the horizon where the island of Rum lurks like a crocodile. A handful of stars poke through the clouds.

I fall asleep quickly but wake up at some point in the dark. I’m looking at stars, thousands of them, through the window next to the bed. I raise the midge screen and put on my glasses to see more clearly. I feel close to the sky, have a feeling of communication that could be a dream. It must have been the starlight that woke me up, when the clouds cleared.

In the morning, when I look at the images, I notice a bony red hand point skyward. The reflection, I think, of the red light I use to avoid disrupting night vision at night. It reminds me of The Finger of God outcrop on the cliffs behind me. 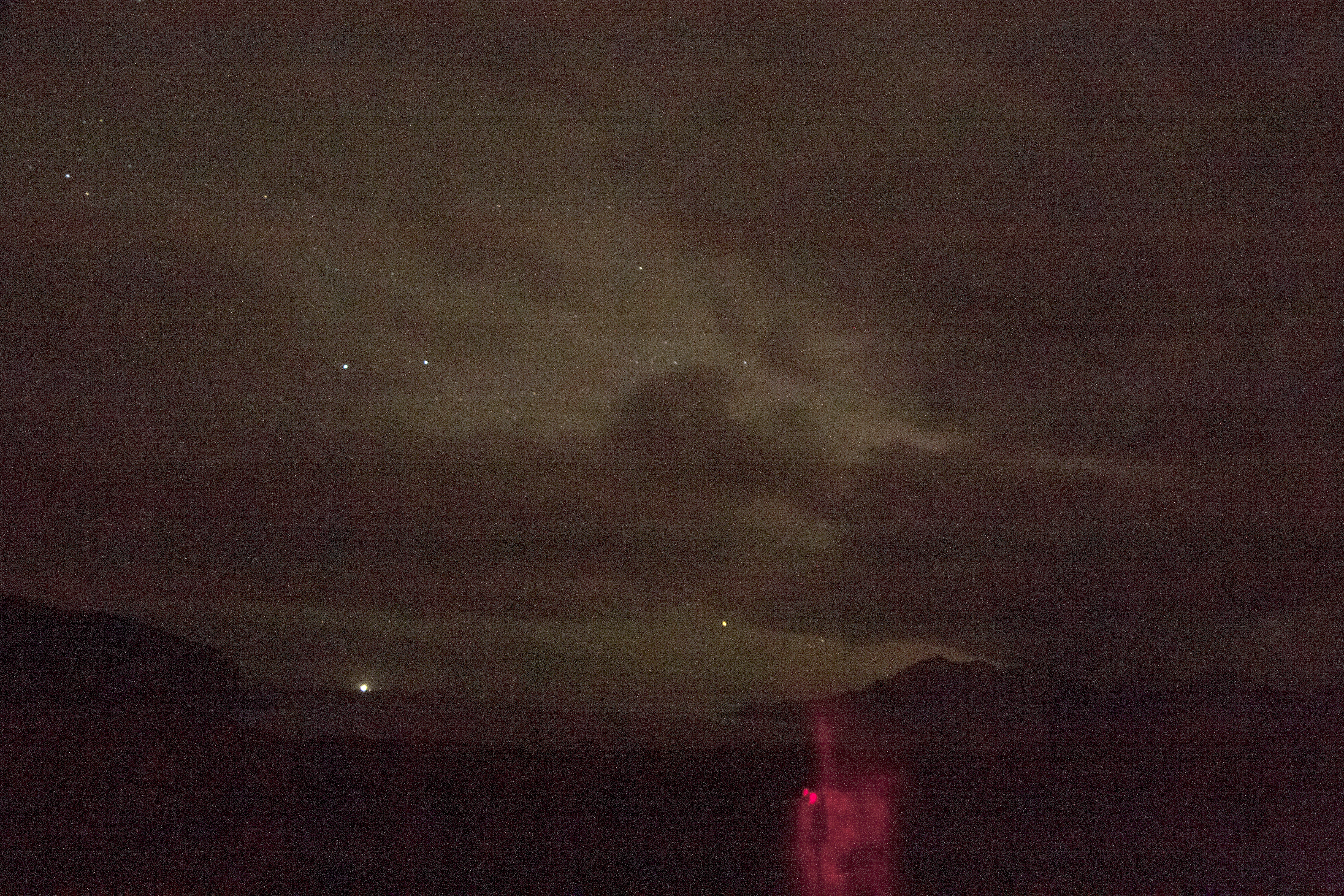 I leave the bothy at sunset to attend a gig in the community hall at the other side of the island. Eddie, Lucy’s partner, whizzes us there in the Twizy, a tiny electric car without side windows. The wind and the rain swirl through and around the car. At the gig, folk sounds from Scotland, Ireland and Hungary duet with accents from every part of our islands. Outside the hall, the night is moonless and cloudful, and on the journey back sheep puff and rain scratches the horizon as far as the headlamps reach. The soundless electric engine gives a sense of flying where the road is smooth, and falling where it isn’t. As I stumble up the hill in the dead of night to the bothy the jam session lingers in my ears. The dry uptempo taps of Eddie’s spoon-playing are accompanied by the insistent burns and streams as they carry rainwater down the hillside. In bed I hear a jet at the top of its flight path. It rumbles alone up there, coming and going like a disorientated wave. I fall asleep to the primitive cries of shearwaters, stereo crashes from the incoming tide at Laig Bay and the Singing Sands, and my own percussion in my ears.

The first night I feel properly alone after having a day without seeing other people. 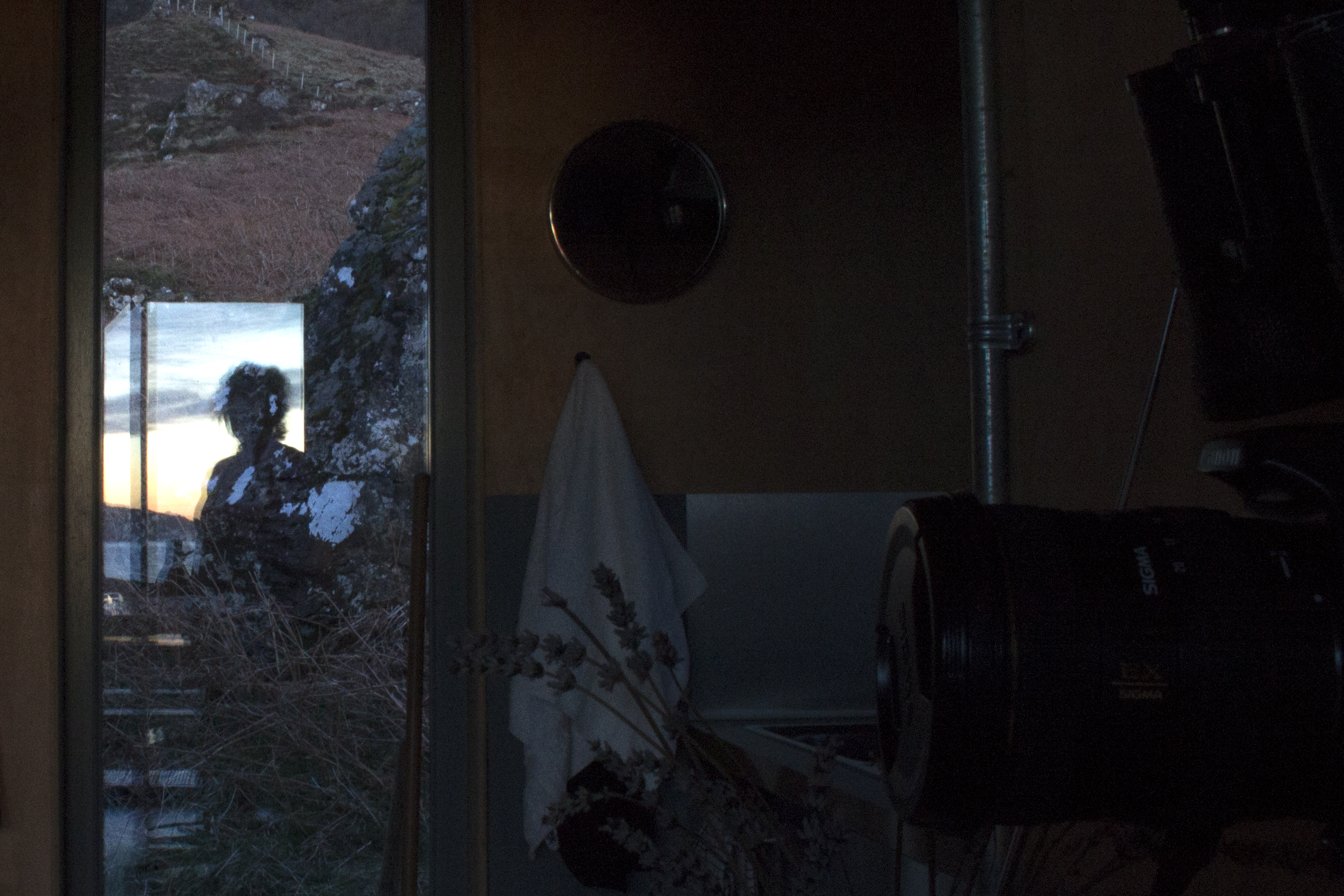 I’m tired after a cycle and a climb up An Sgurr so expect to sleep well. I’m looking forward to switching on the sodium light in the bothy. 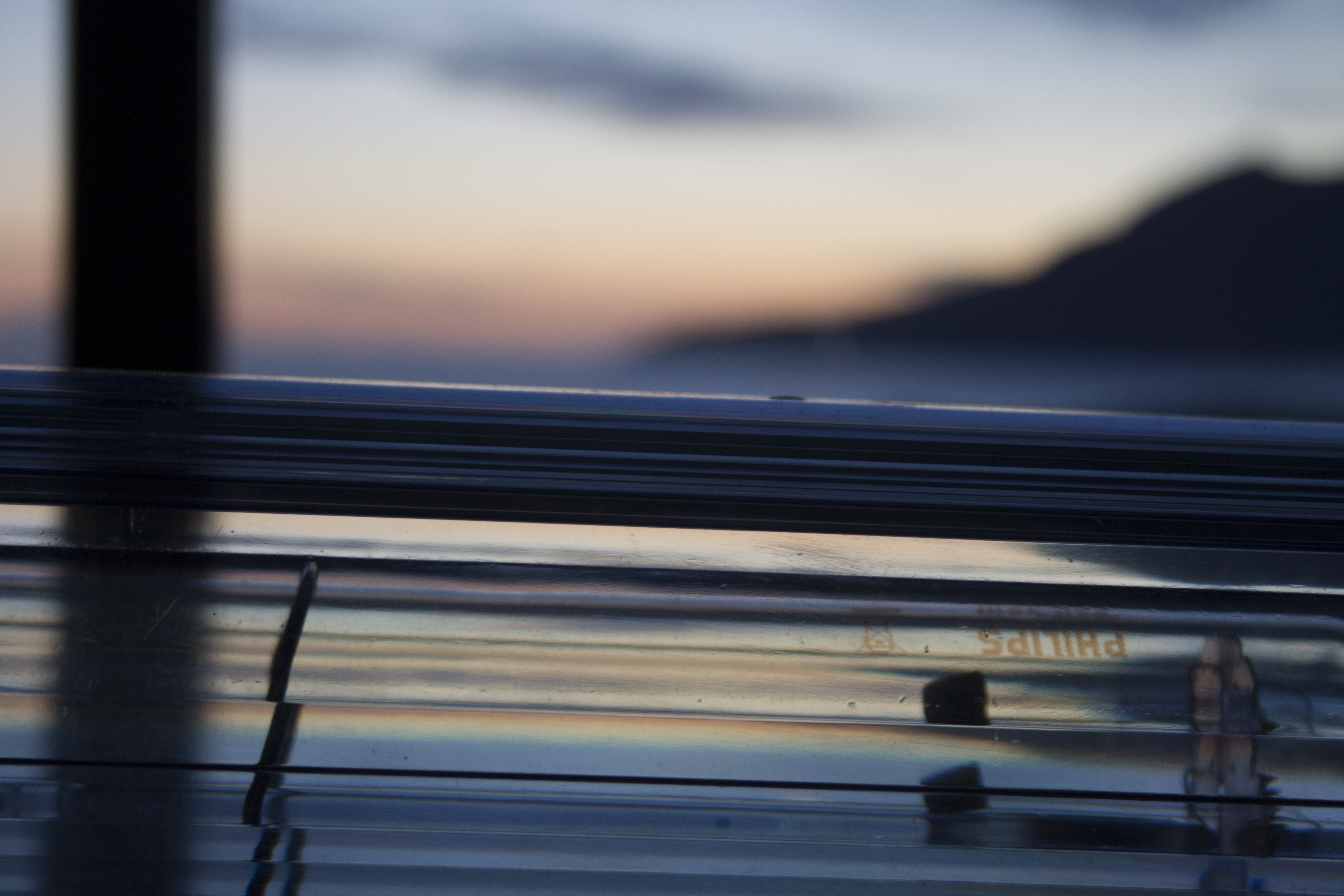 Now, having lived here for a couple of days, I’m mindful of the irony of bringing to this island, where the ethos of sustainability is central to survival, a light that is being abandoned because of its inefficiency. The limited amount of energy available to me has been generated by solar panels and the stove I light, so I decide just to have it on for around half an hour. When I switch on, neon ignites and the red-pink glow evokes a sense of transition, of expectation. The outside seem suddenly dark. 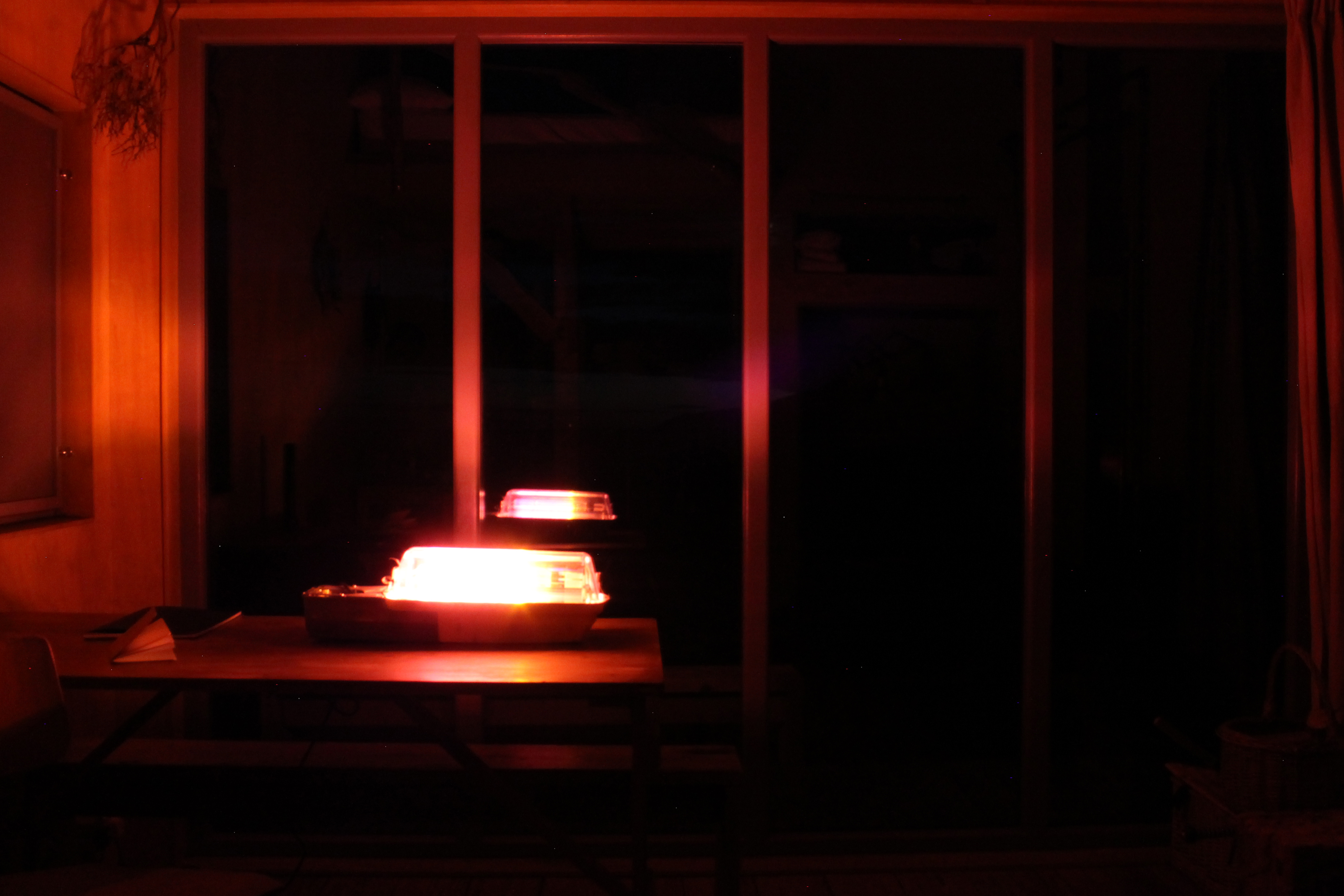 The glow intensifies and overwhelms colour, making everything orange to brown to black. I feel a ridiculous kind of relief. 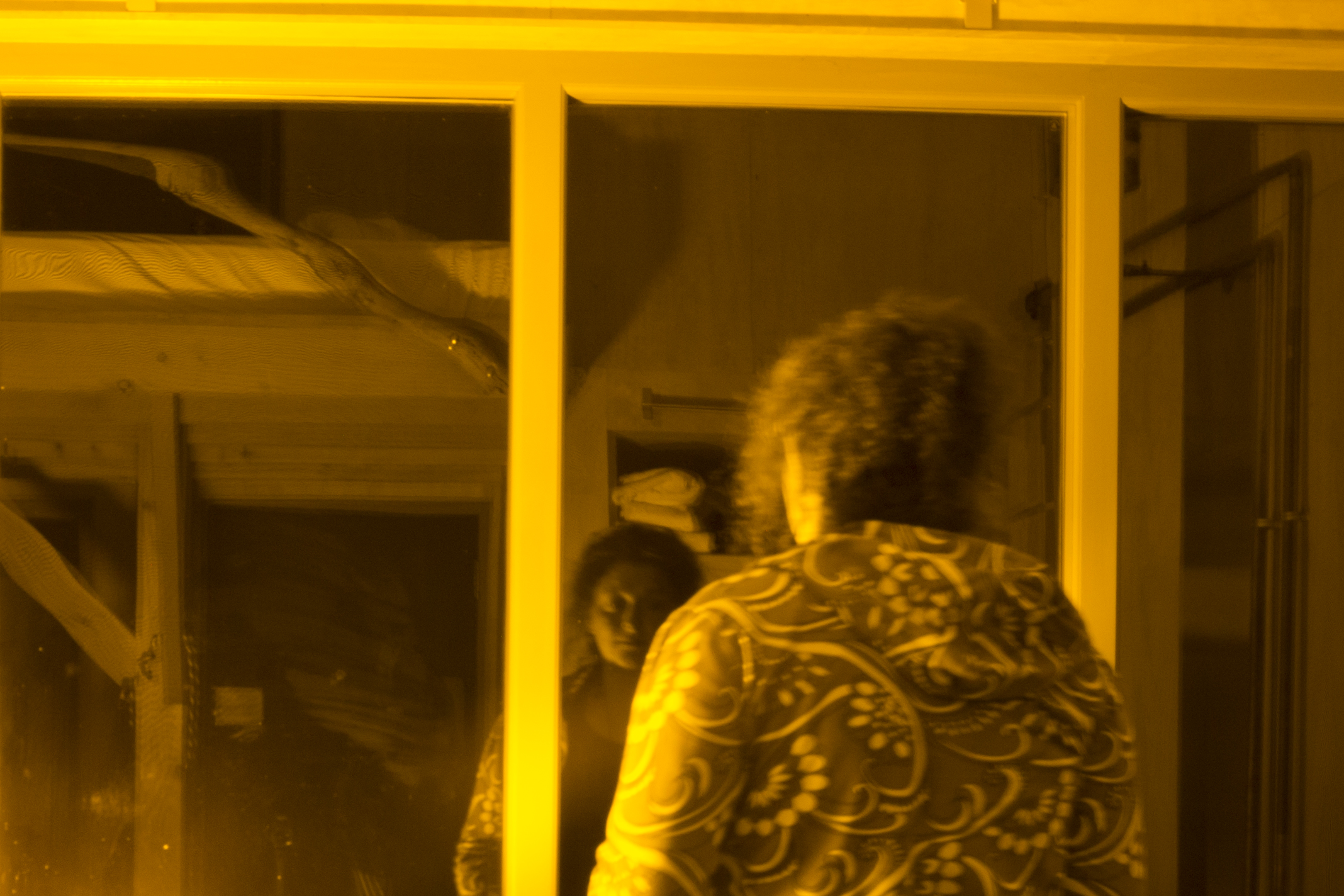 The bothy becomes a lighthouse 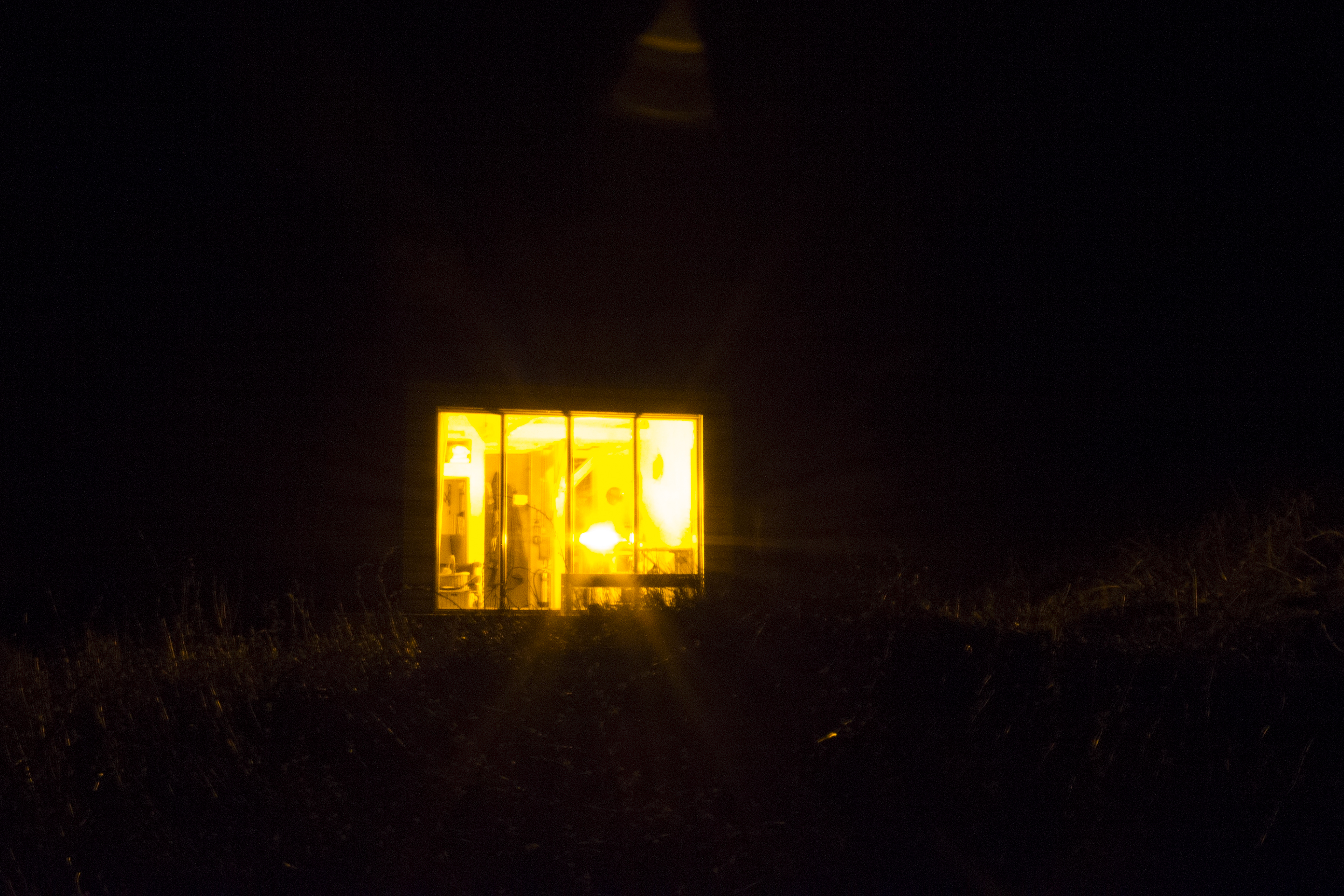 bright enough to guide King Sweeney to safety through the wild landscapes he was banished to. 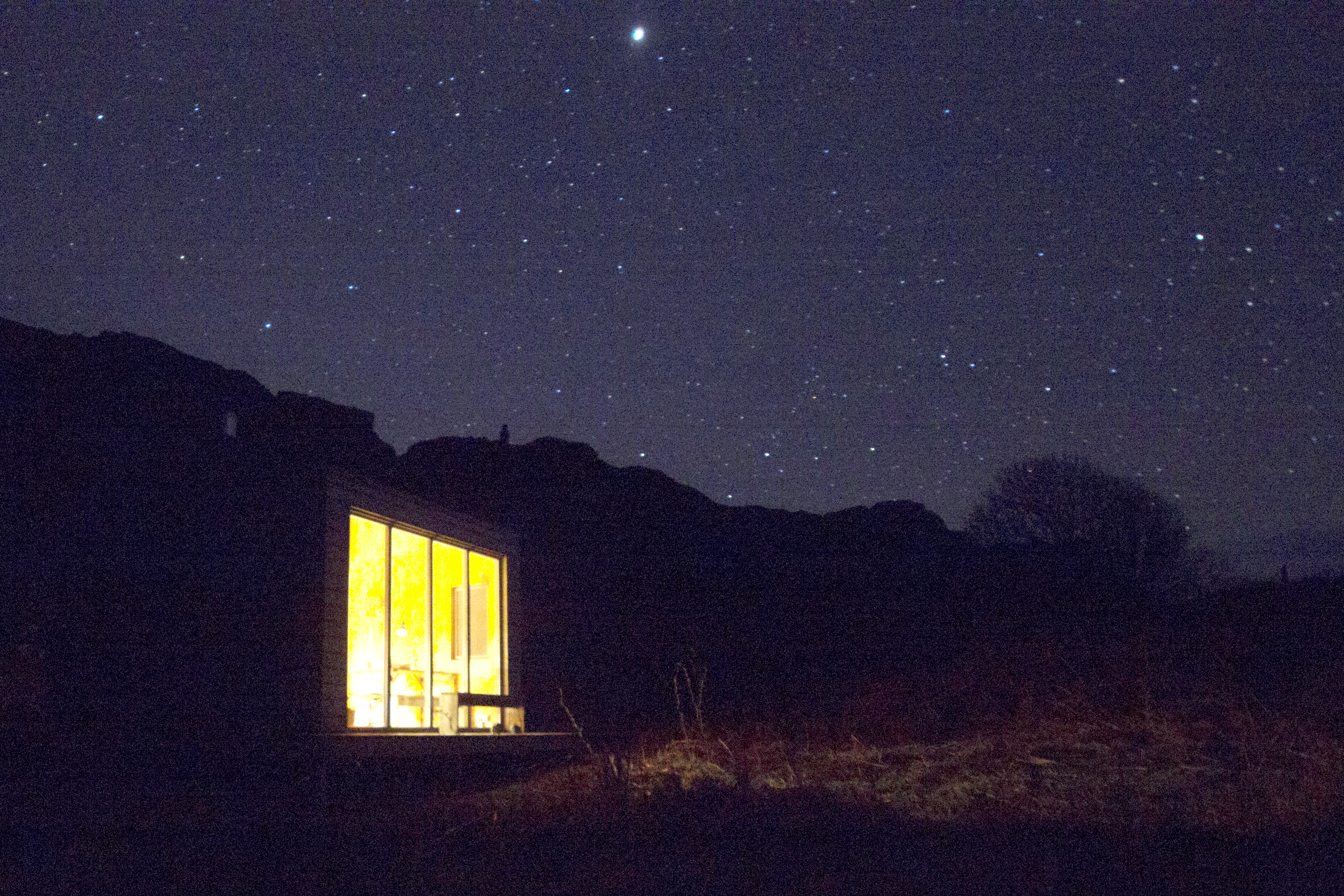 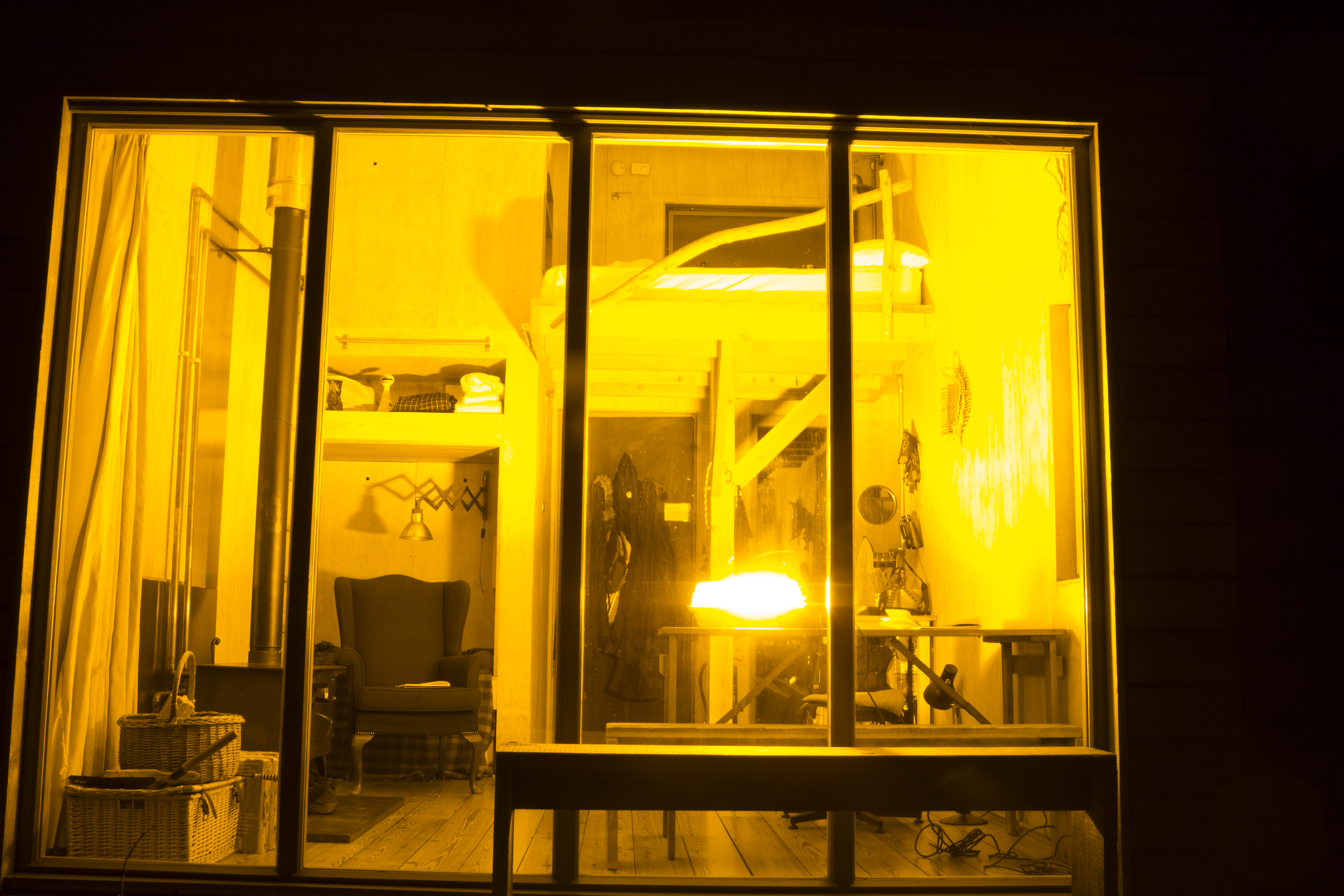 A torch beam bobs on the hillside to my left, quite close. Disembodied, it makes me jumpy and I go back inside. With the door closed behind me, feeling foolish, I realise it must be the farmer checking on the new calf in the field next to me. I switch off the sodium light and reaccustom my eyes to the darkness. It takes time to switch off the habits of the city. From the doorway, I photograph the stars behind the cliff at the back of the bothy. 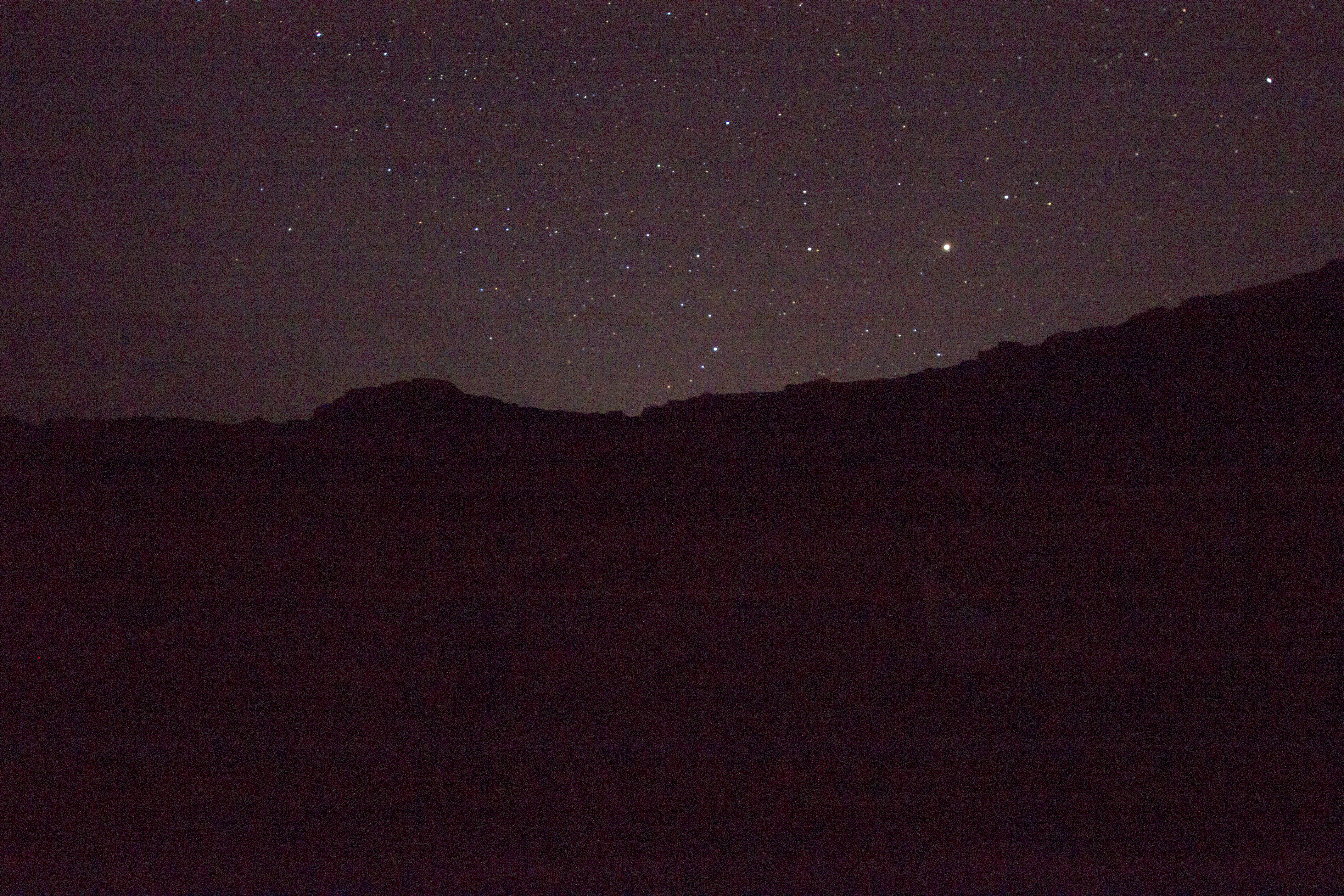 I take my camera to bed, an extra eye that can see in the dark. With the window open, it’s almost like sleeping outside. 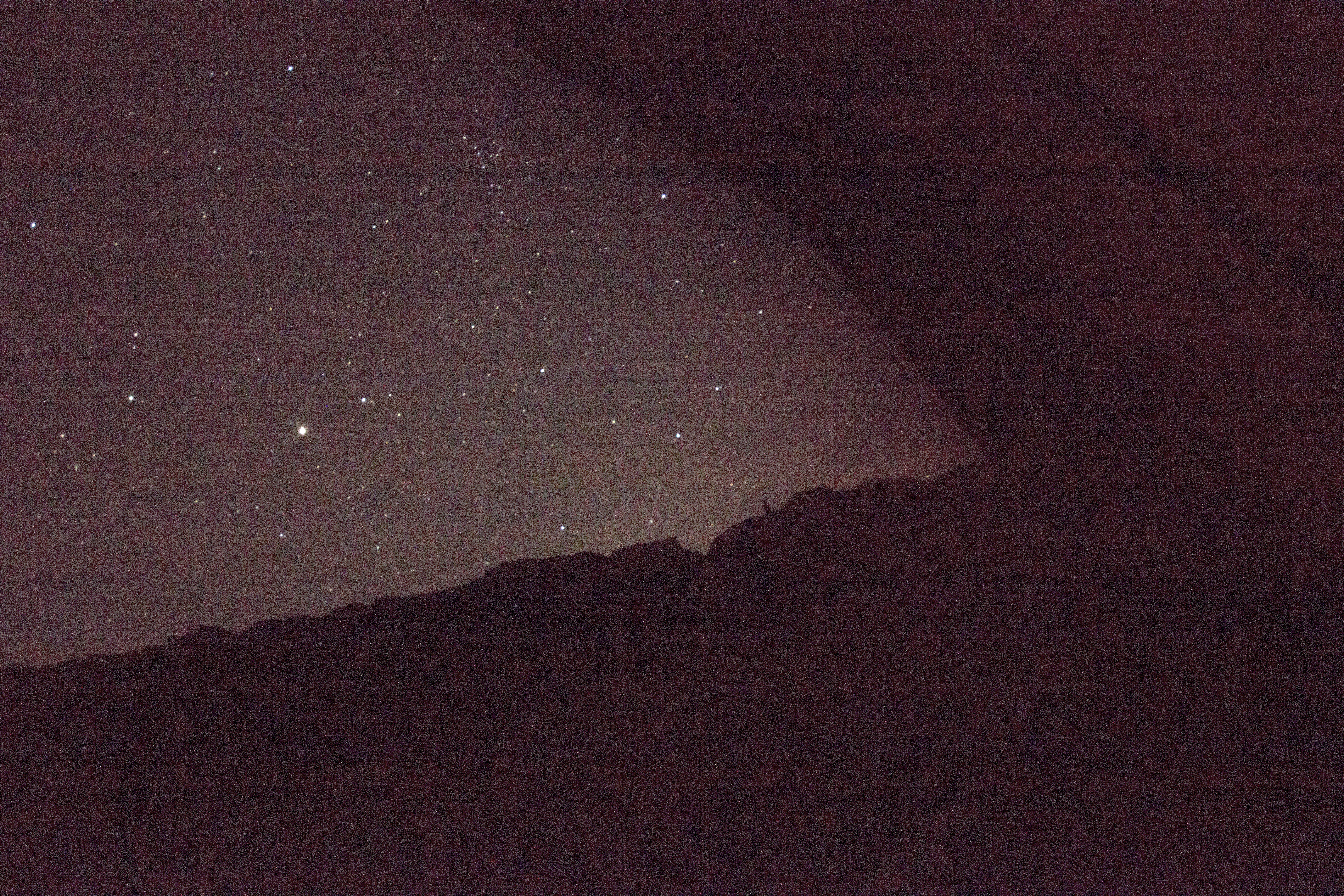 I’m annoyed at myself for not exploring more bravely last night, and have resolved to make the most of this last night. I’ll be putting on the light at sunset – lighting up time back home – and have invited friends, Moira and Mark, I bumped into on the way back from the beach, and Lucy. I wait for the sun to go down, looking forward to the night. 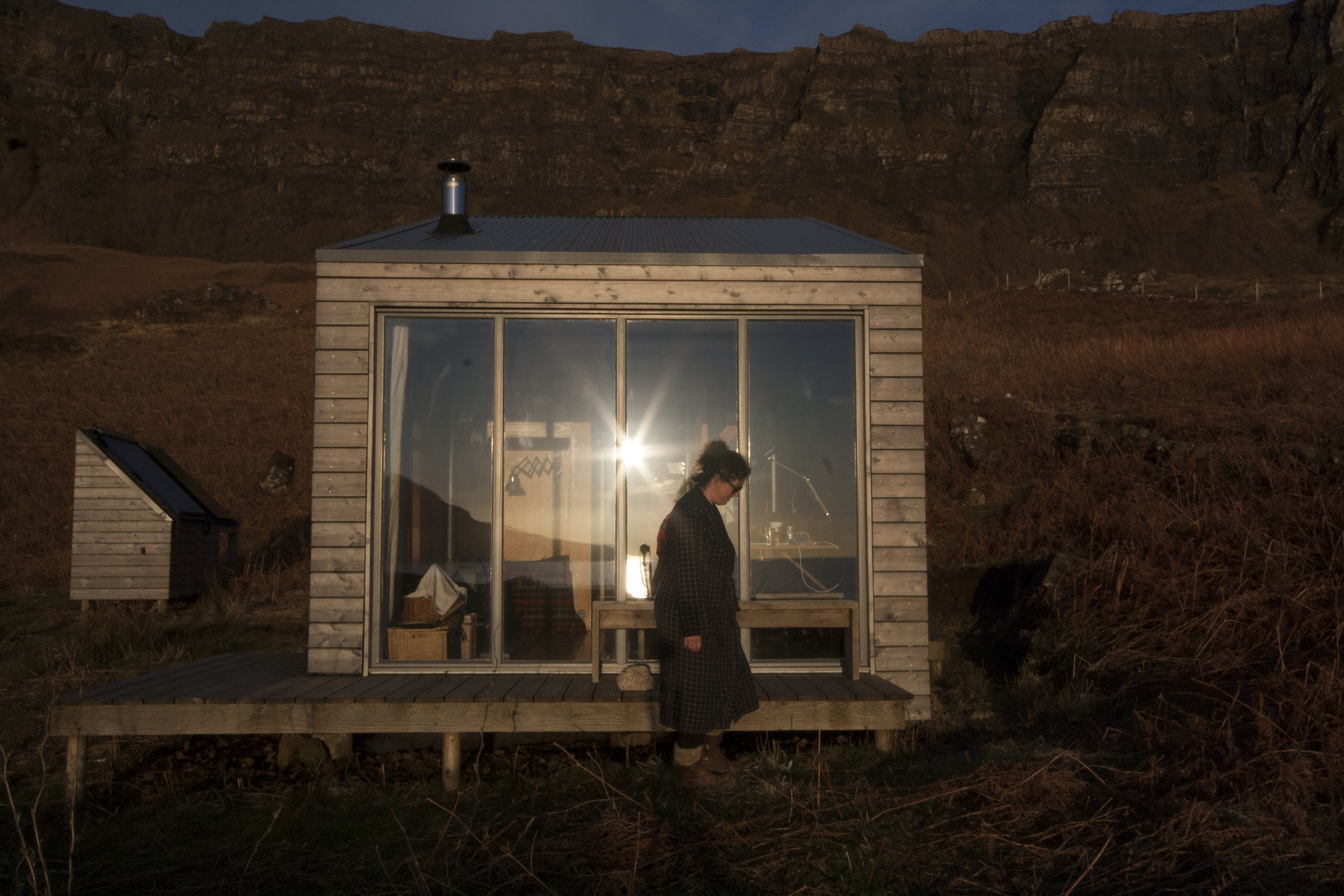 I install, switch on 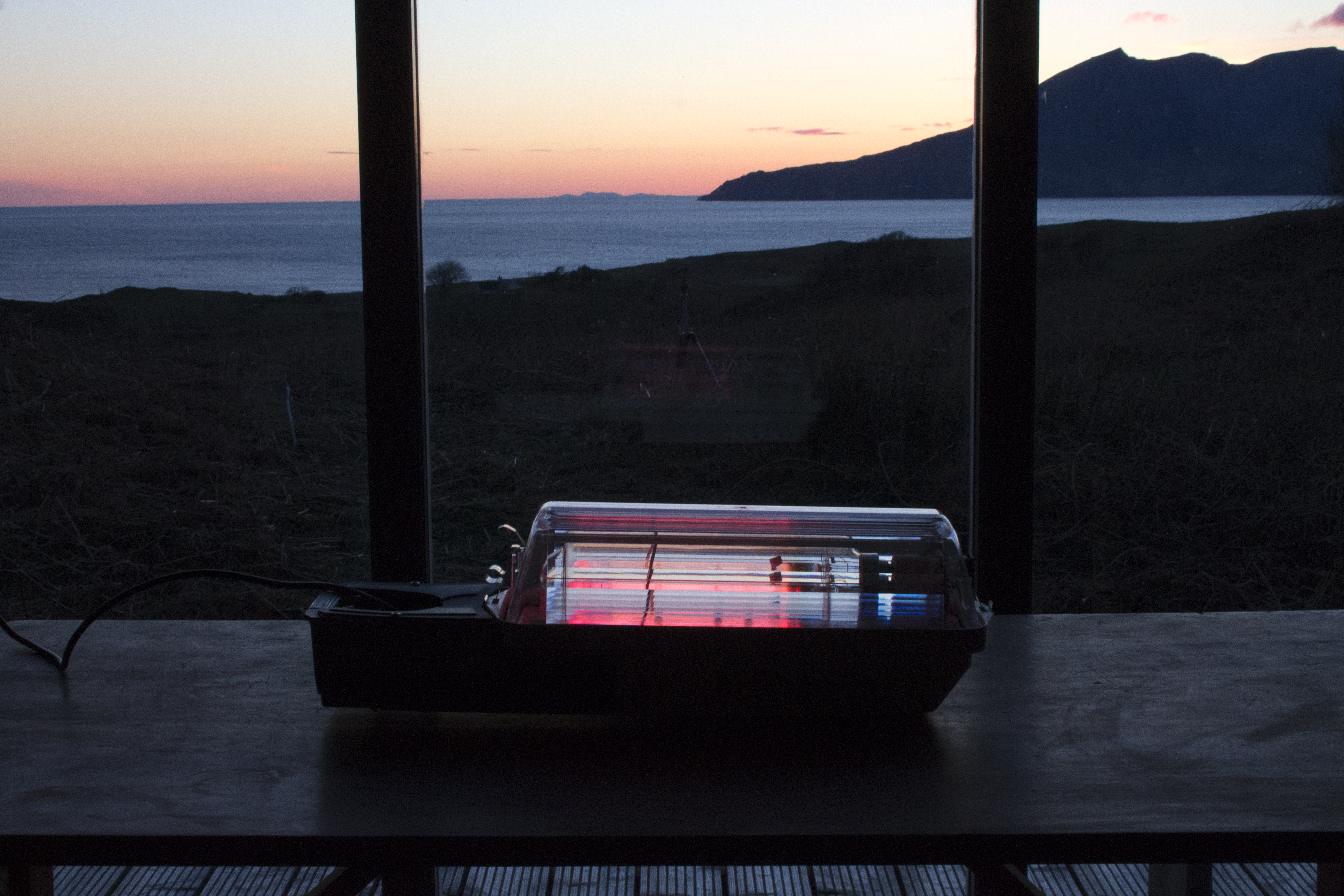 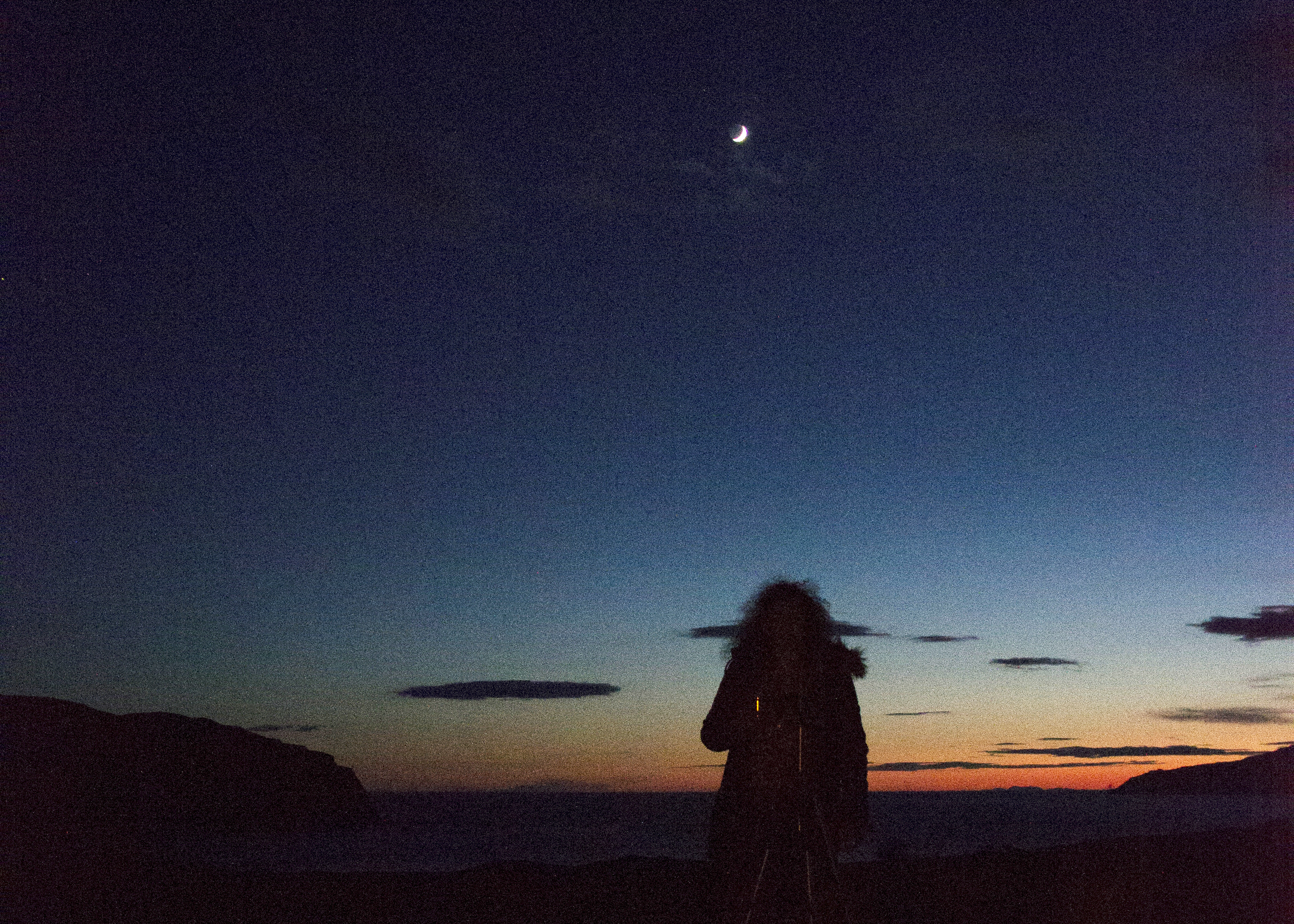 When Moira and her family arrive, it’s good to see them, although it feels strange to have people around. 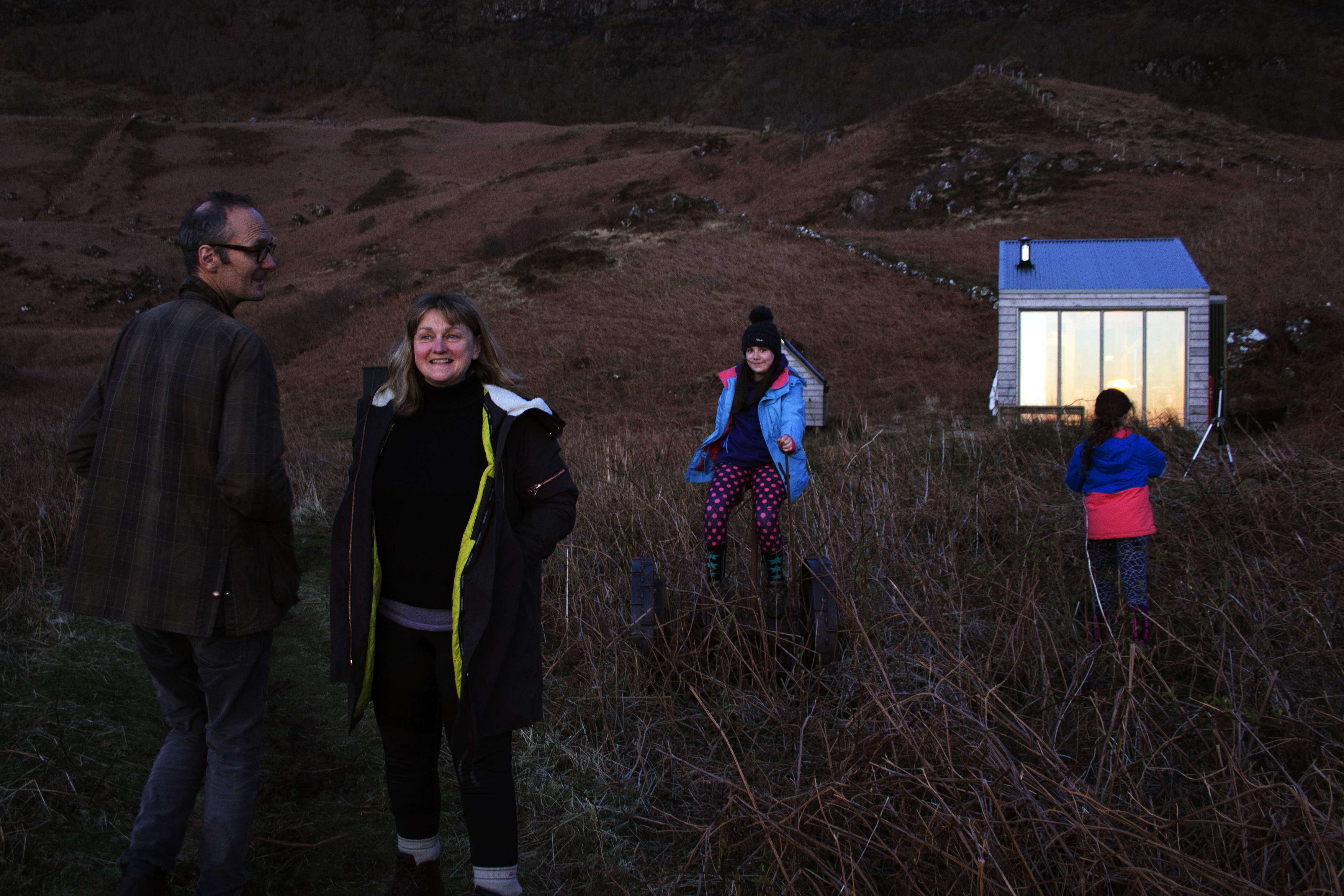 They help me document. 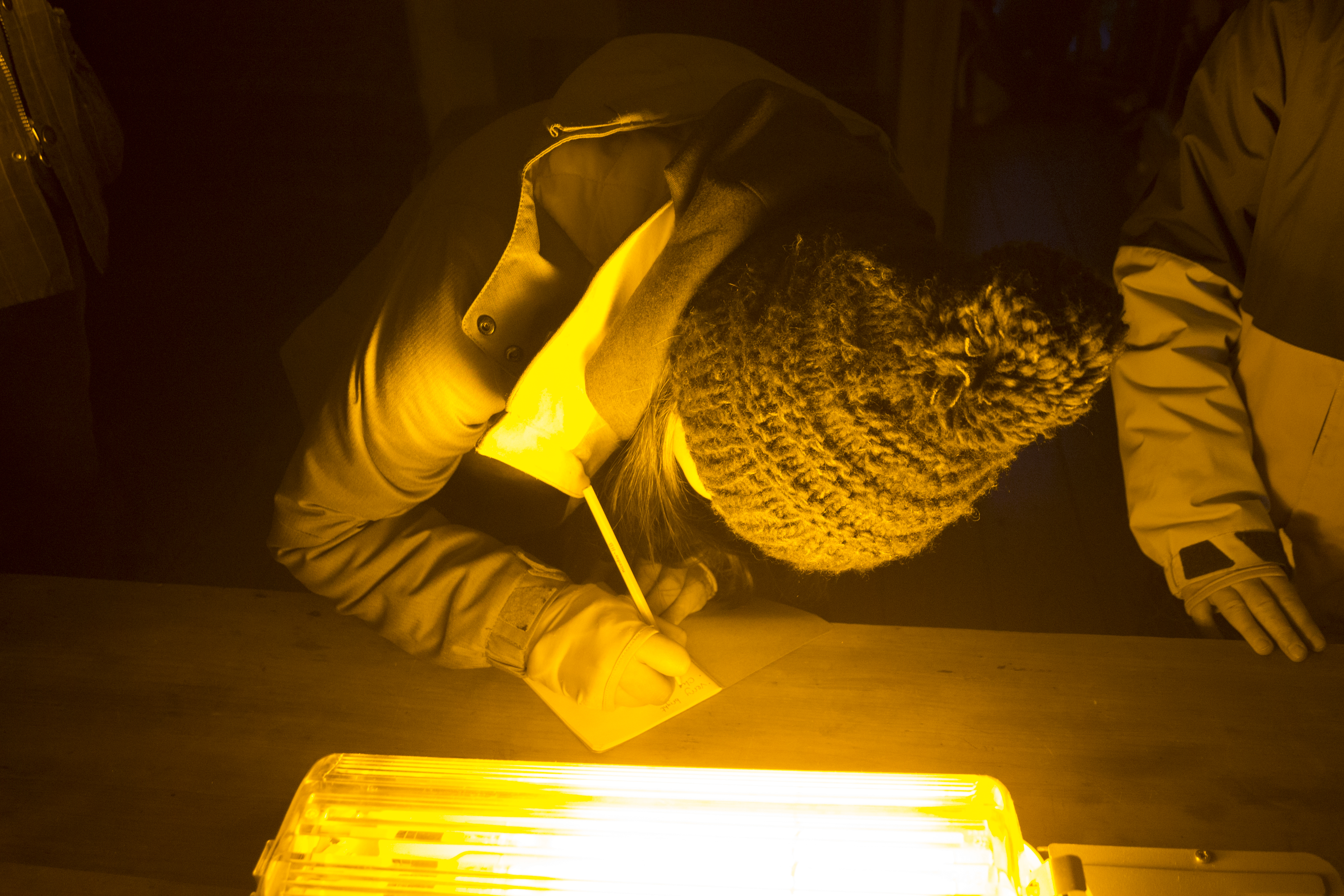 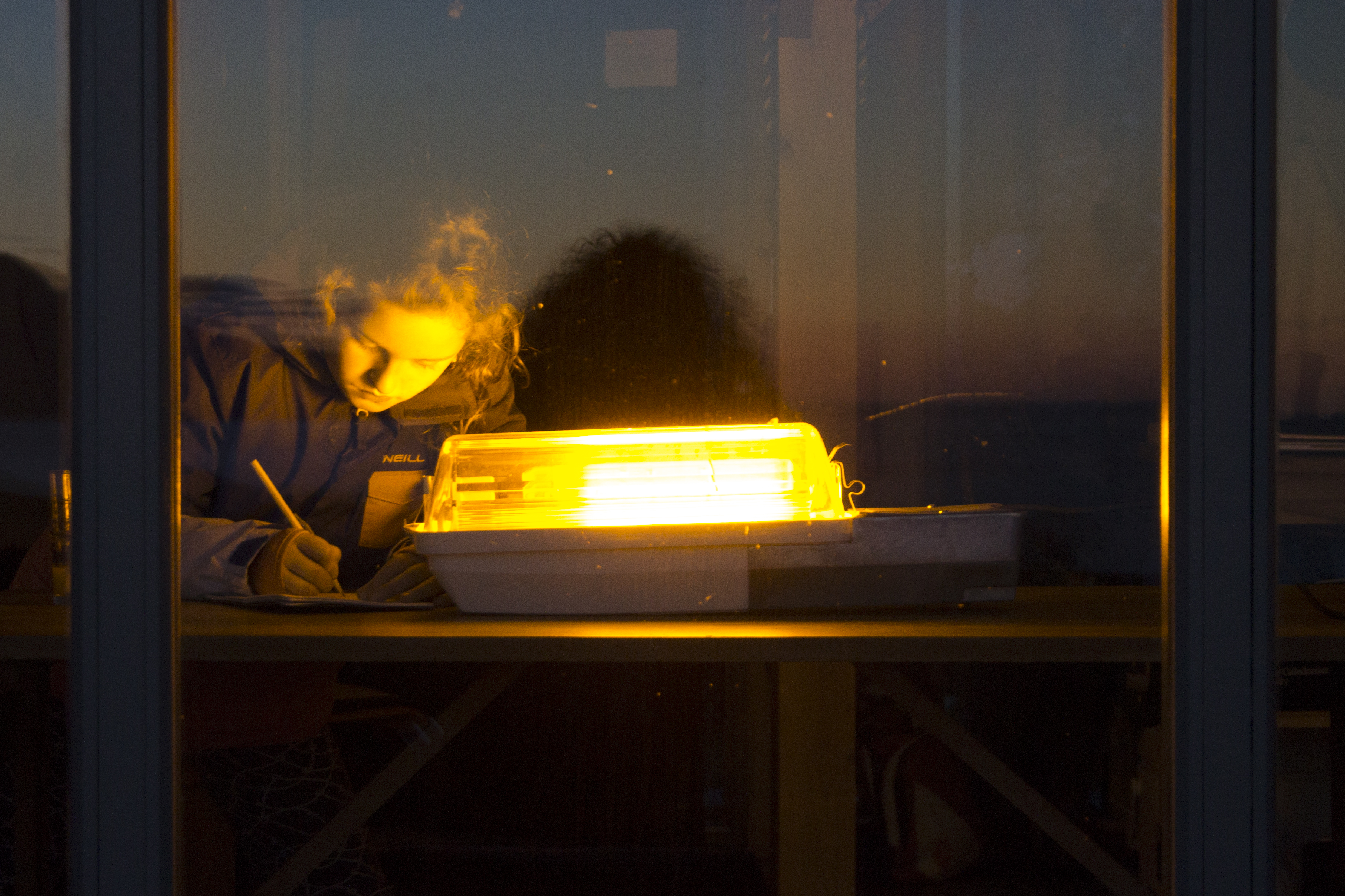 We have a drink and catch up and I enjoy sharing this experience, hearing the observations of others. All of us, even the girls, have an awareness of it that goes back to early childhood. There was an orange streetlight outside my tenement bedroom window when I was a baby, then the house I moved to as a toddler. Mark recalls the ‘vaguely toxic’ orange glow over towns and cities.   Other people I’ve spoken to describe the lights as ‘depressing’, ‘queasy’, ‘greasy’. Here, as daylight fades, the light mirrors the sunset and is warm and cheering, like arrested firelight. 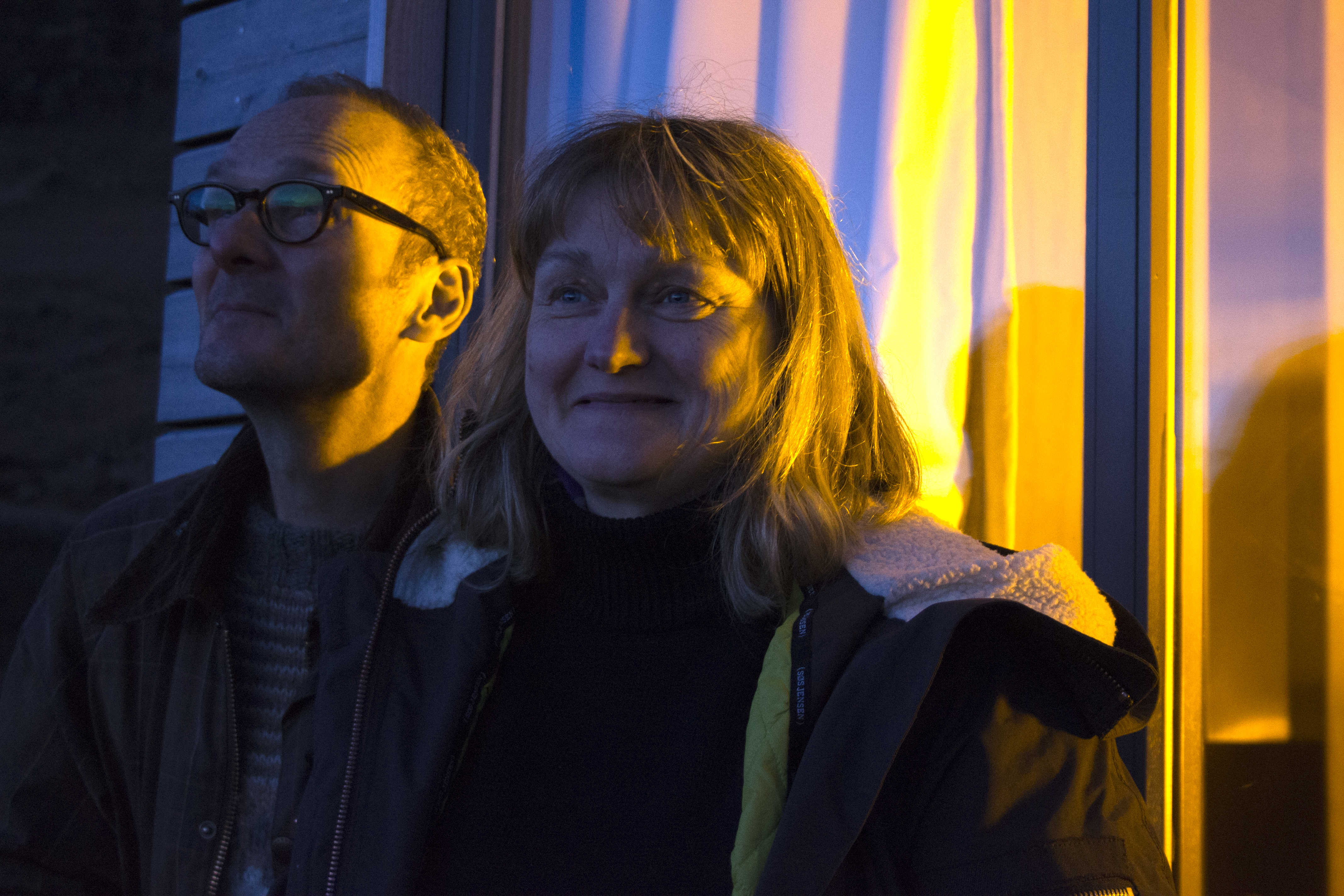 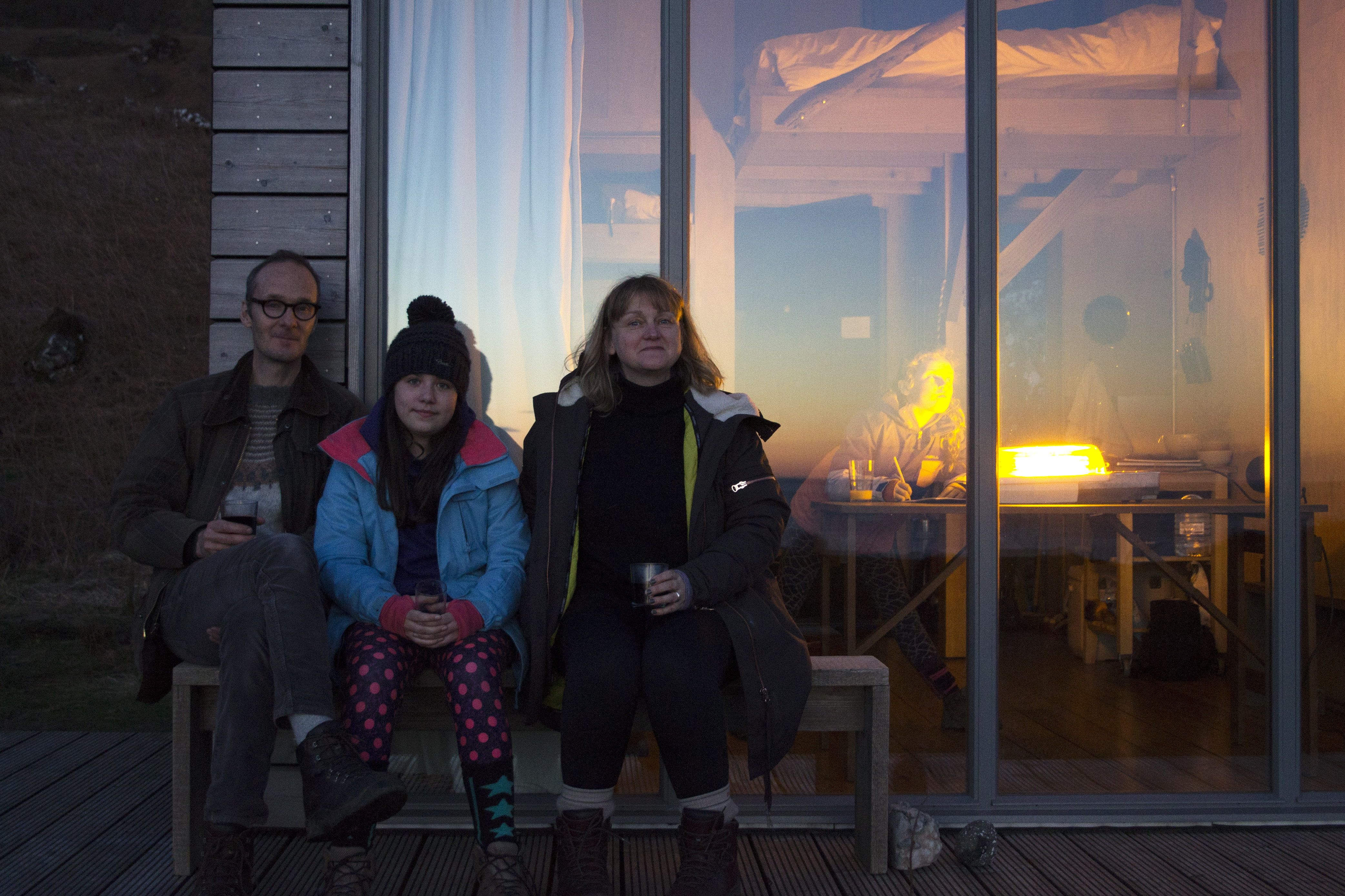 We hear Lucy approach. She knows Moira, and we drink and chat. I abandon detailed documentation. It feels like we’re sitting around a campfire, with our backs to the heat. 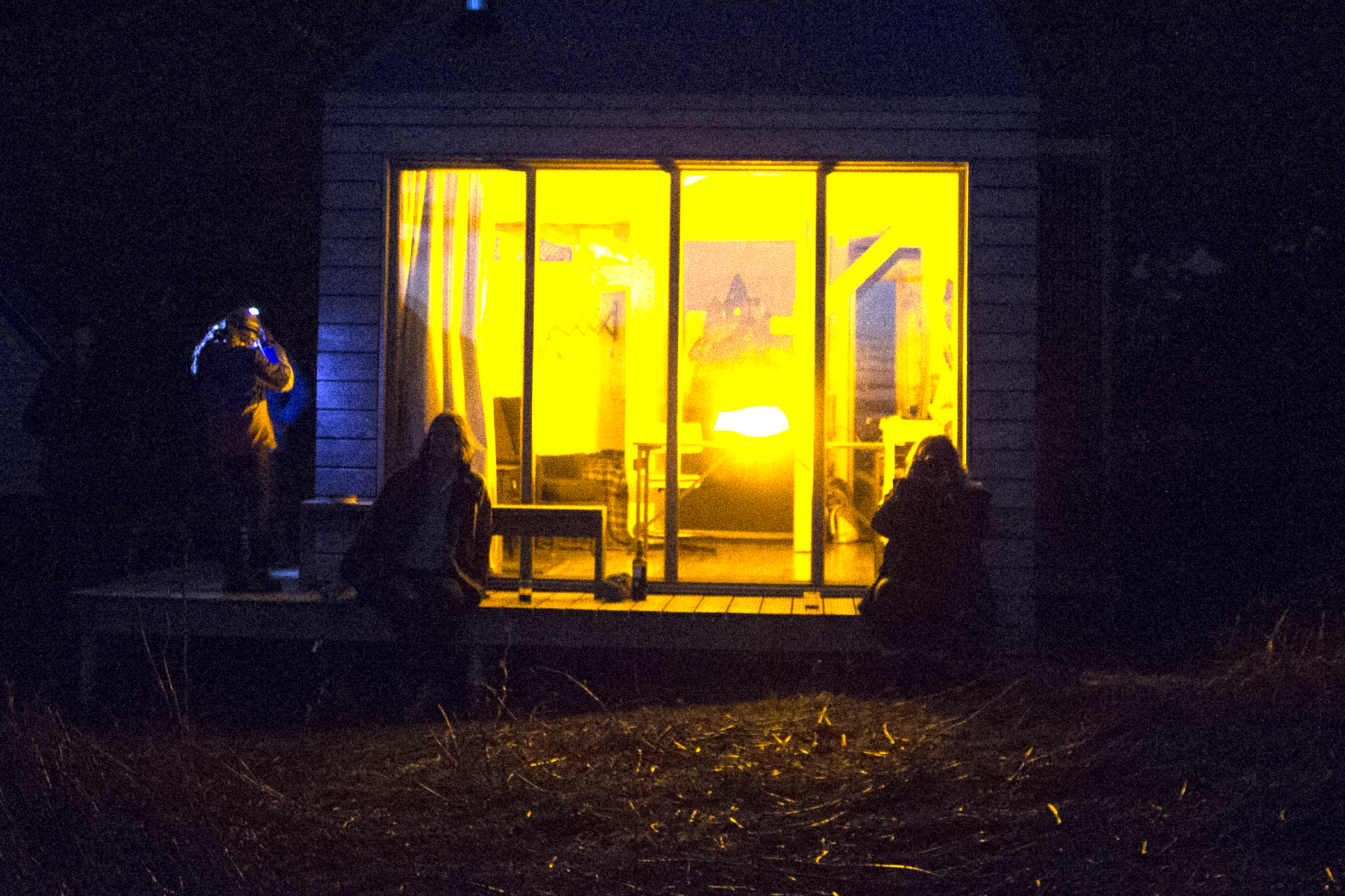 Lucy takes the girls to explore the back of the bothy. Startled by the willow sculpture of Mad Sweeney that crouches up the hillside, their head torches bounce back down the path and they are quickly back at the fireside. 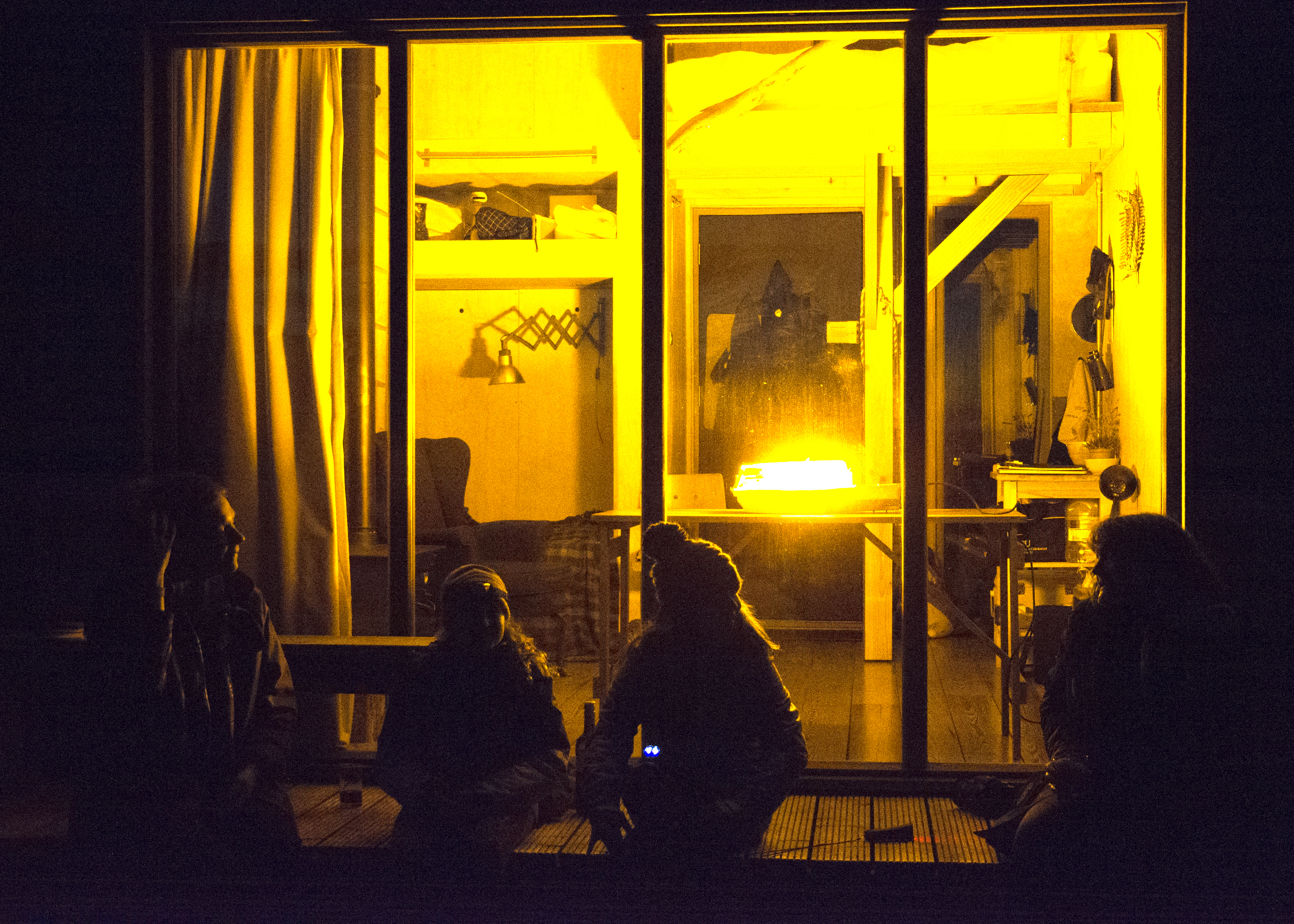 When they’ve gone, their voices trail back to me for a while distorted by increasing distance, until they are snuffed out by indoors. I take the light outside and place it on the ground next to the bothy wall. Its unusual closeness to ordinary things gives shadows life 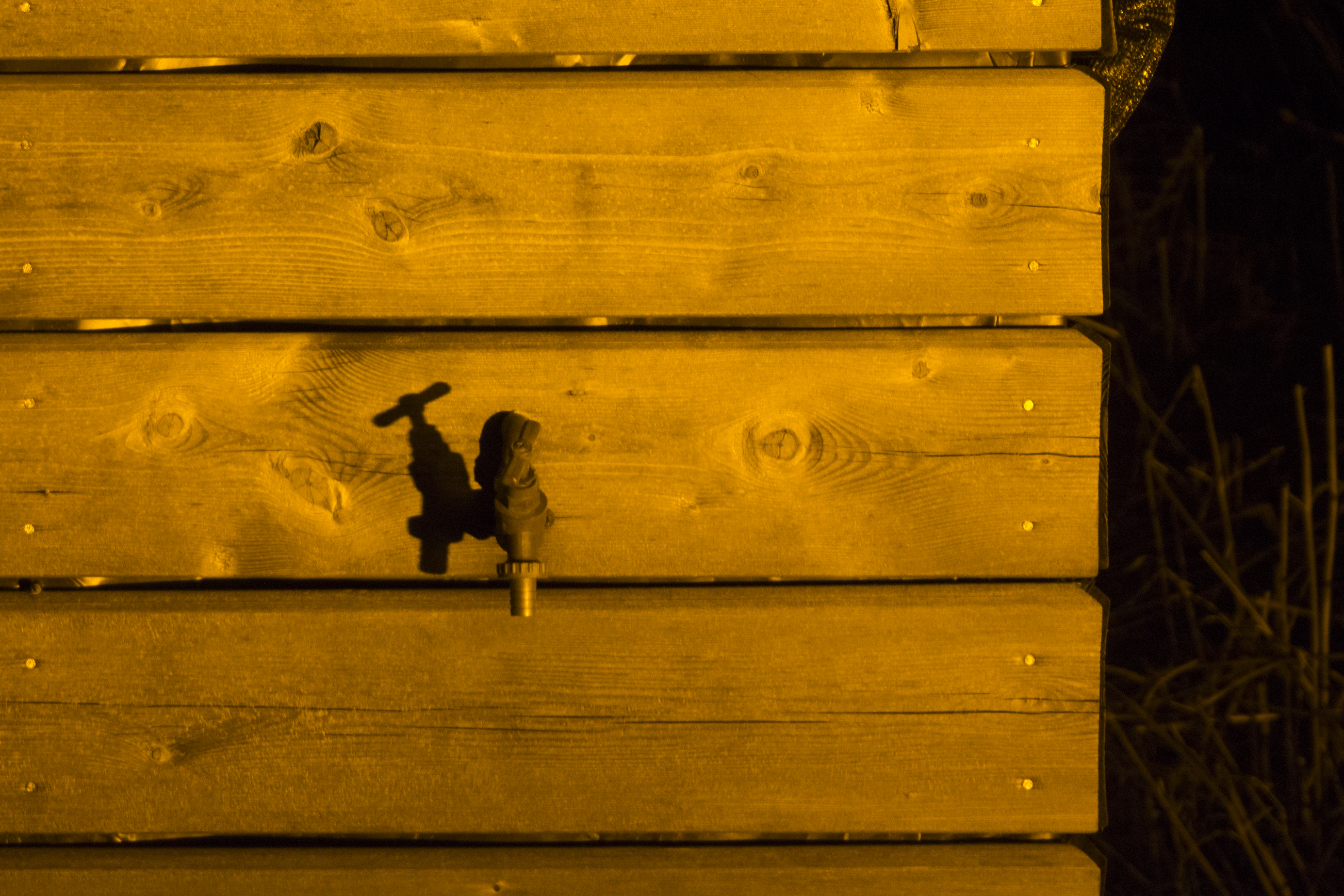 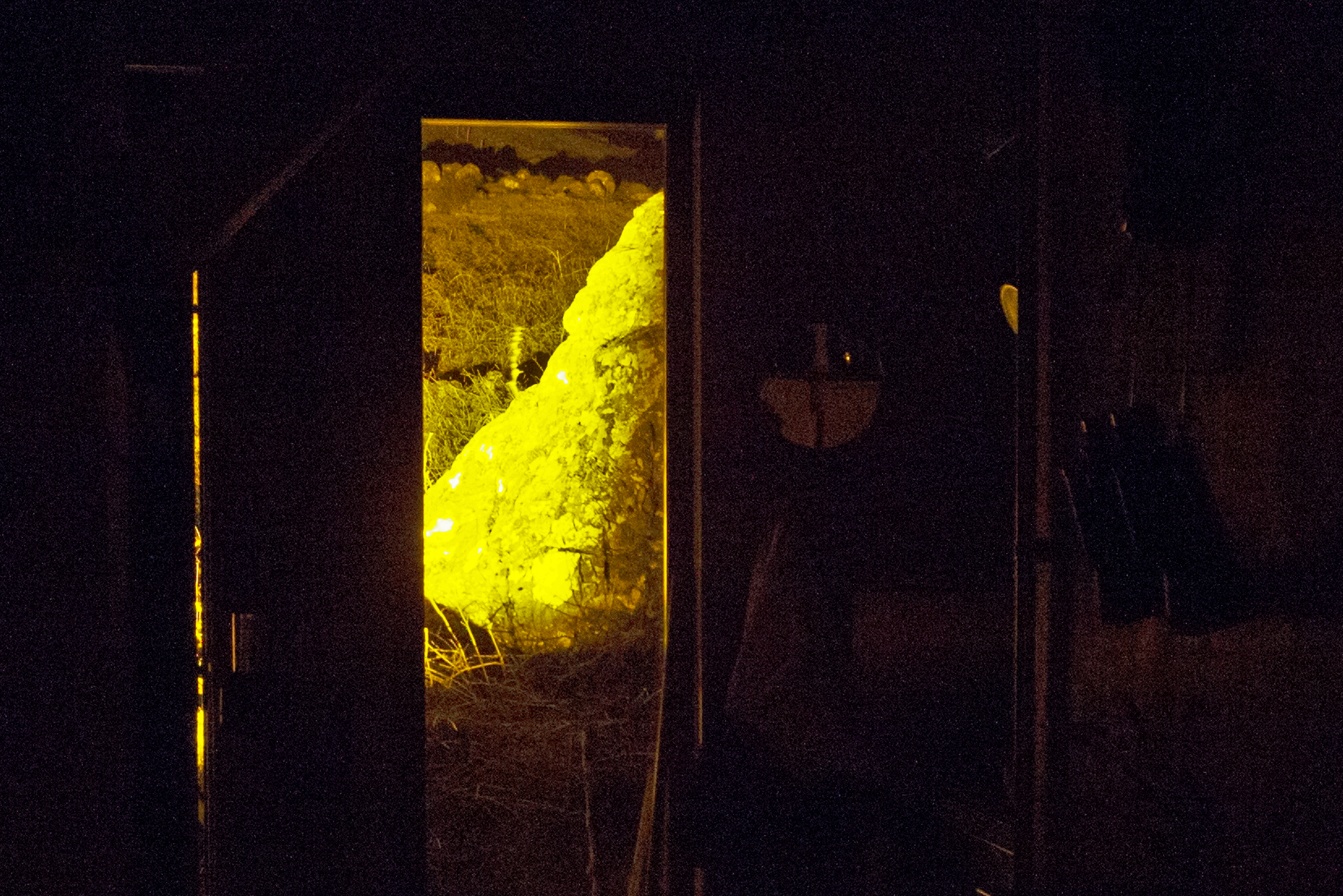 The sodium glow makes a torch of the bothy. A sci-fi monolith. 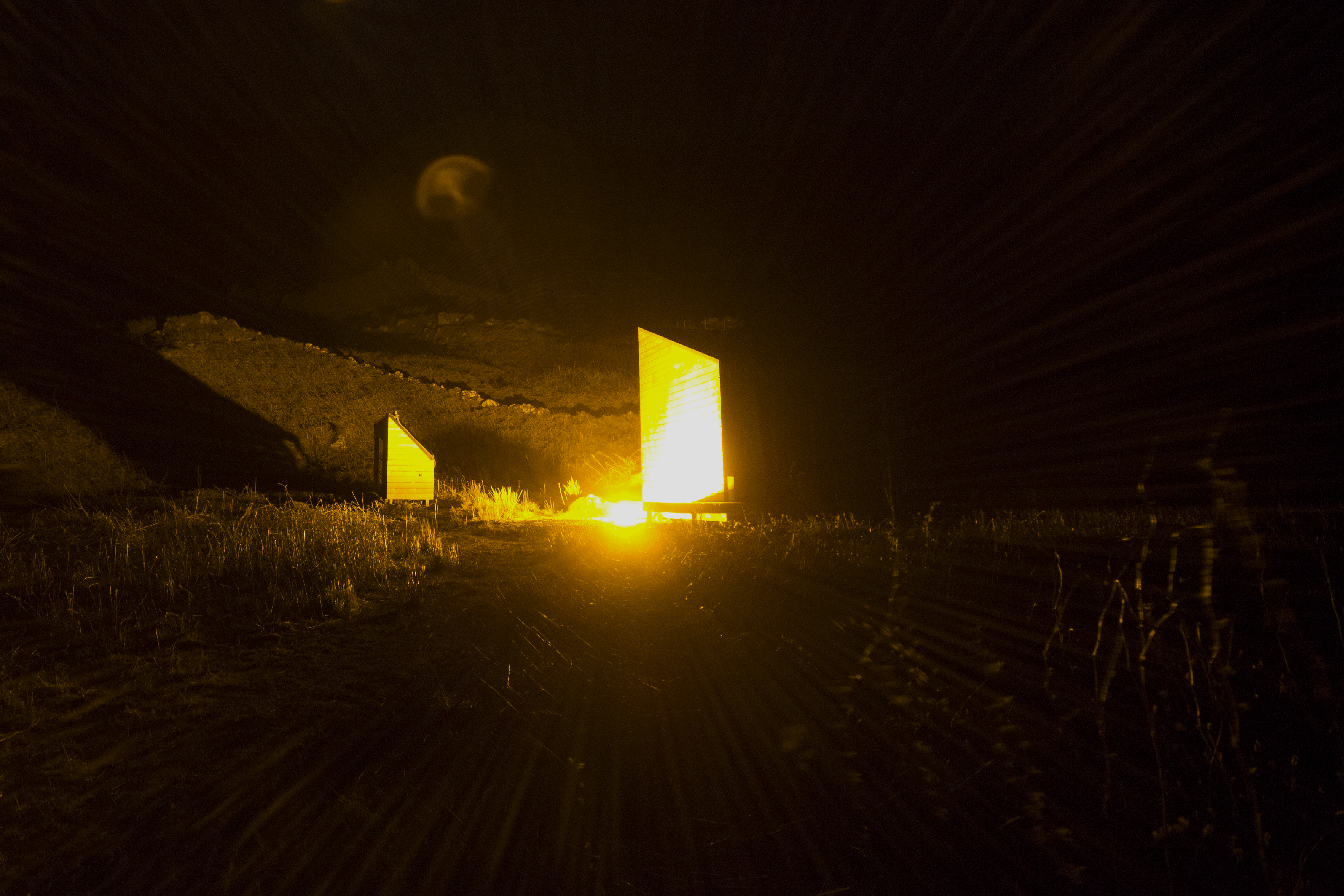 I walk down the path away from the bothy to see the extent of the ‘pollution’, carrying my torch in case the bothy’s power, stored in a battery, drains, leaving me in the dark. 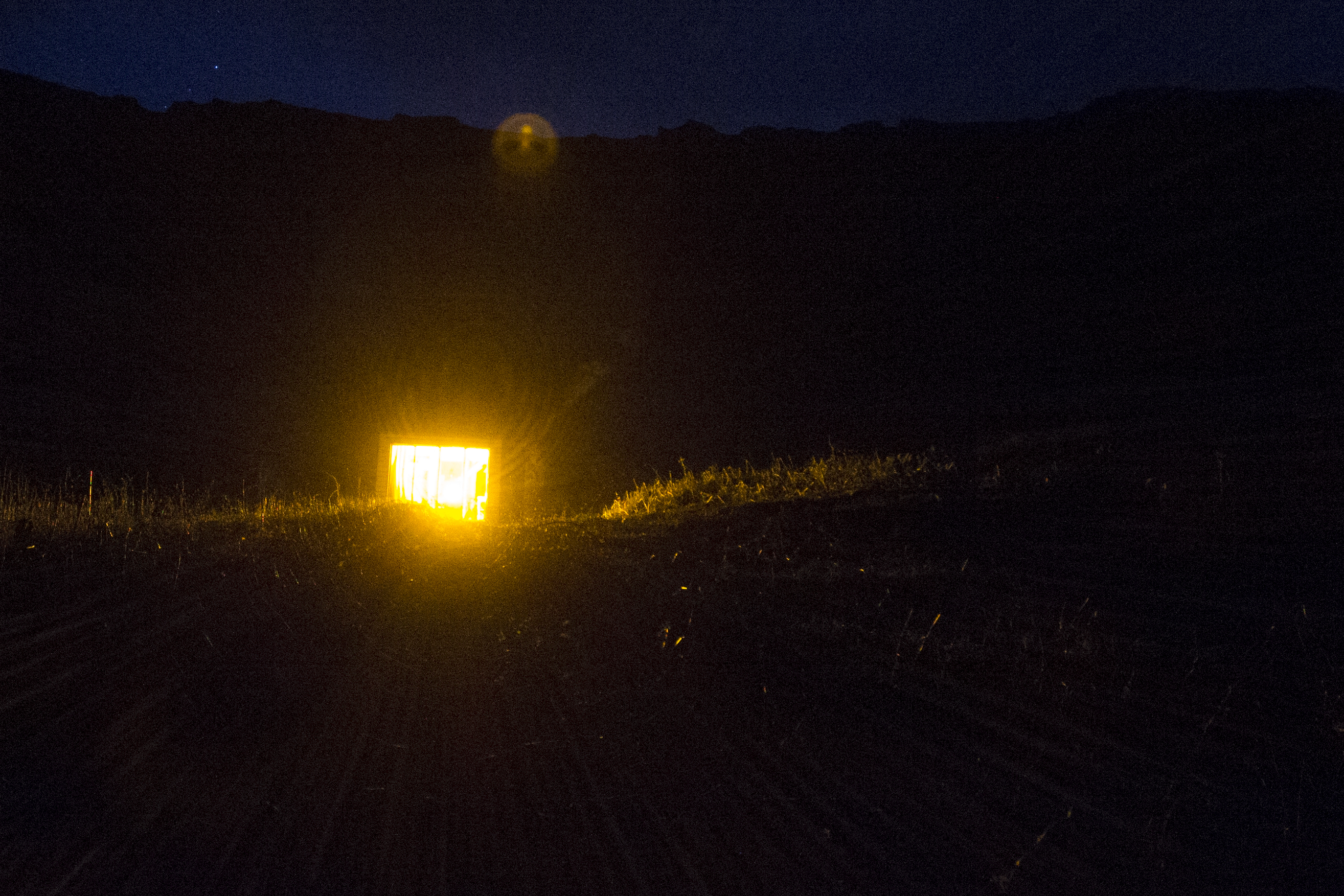 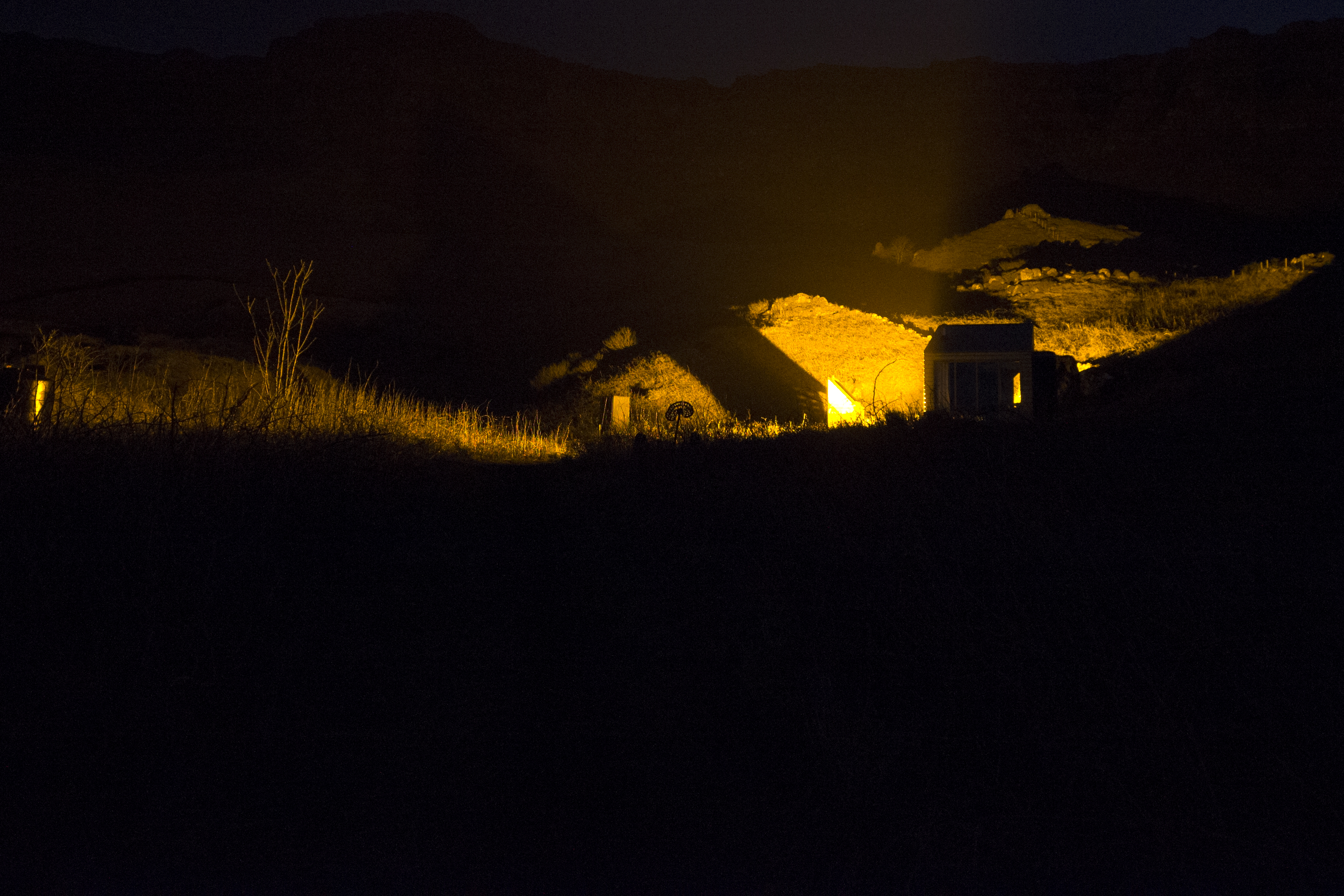 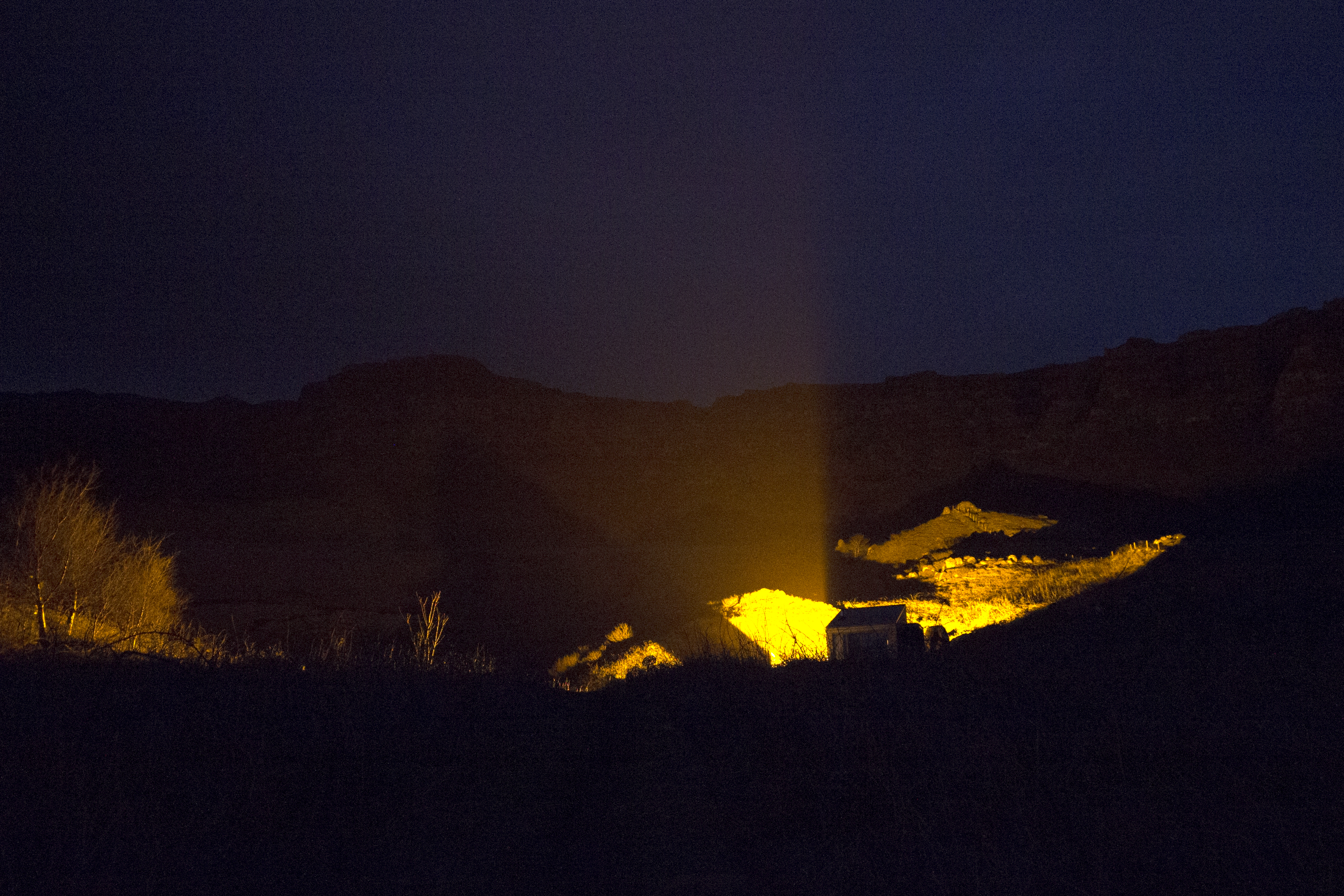 then, sets below a hillock, and is softened by bracken and cliff and sky. 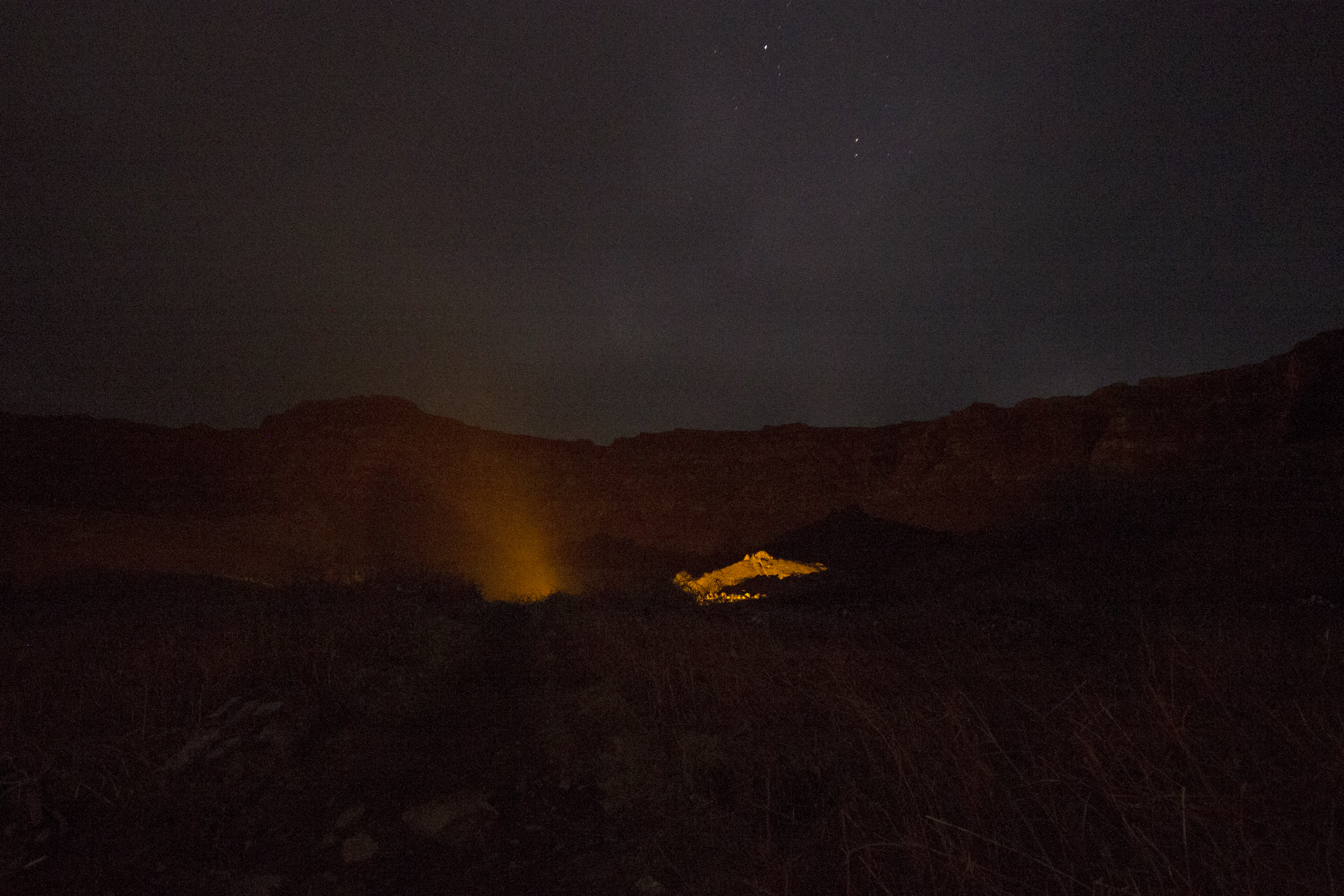 Back at the bothy, I switch off the streetlight. I go outside and see a shooting star. Sounds and sensations, now familiar, are foregrounded. A shearwater, a jet, the shift in air as a bat passes. 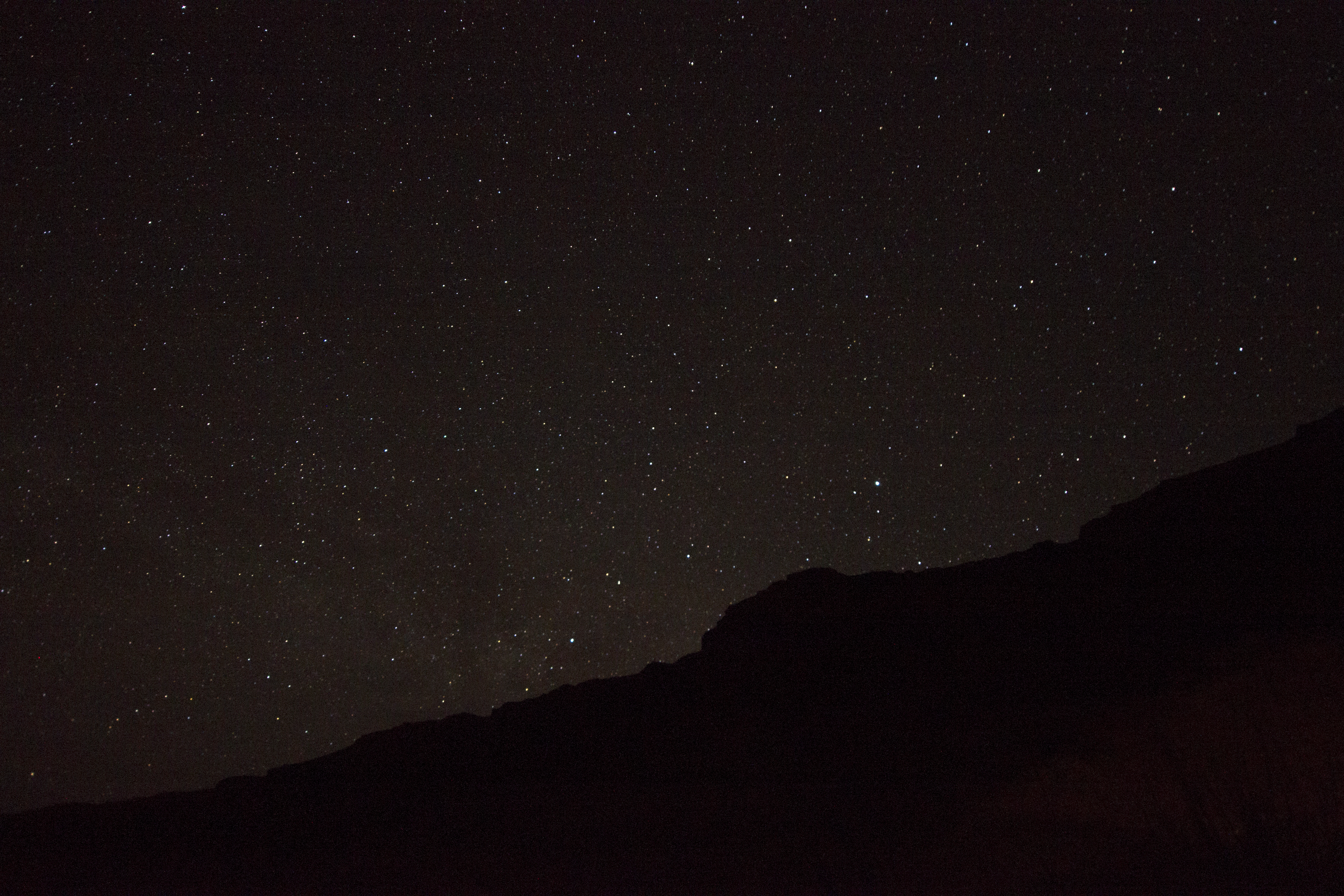 Eigg has adjusted my night vision. Here, off grid, light is applied differently. People know how many kilowatts of energy they use and aren’t afraid in the dark. My sodium light sculpted the landscape for a brief time and is a passing, unnecessary curiosity. Before I came here, I was already nostalgic about the impending loss colour in my nightscape. Now, this sentiment is tempered by a new awareness of its excess.