( For full enjoyment of the audio clips we suggest wearing headphones ) Alison and I are old friends. We first collaborated as Live Violinist and Live Visual Artist in the experimental, interdisciplinary company Apocryphal Theatre in London between 2005-2011 and having moved to Glasgow in 2012, it was great to be able to spend a week working together based at Sweeney’s Bothy on the Isle of Eigg, sowing the seeds for a new collaborative project.

Having imagined a retreat-like scenario far away from people all together, this idea was almost immediately dismantled by Eddie who picked us up from the ferry in his landrover and asked us if we would care to join him for a céilidh at the community hall in the evening. Our week on Eigg was enhanced by meeting many of it’s wonderful islanders – a bonfire gathering on the beach, céilidh dancing at the lovely old hall, beer at the pier, a sailor knot-tying workshop led by Celia and Camille with the after-school club and a singing session run by Norah from the Eco Centre.

In spite of this unexpected social life, there was still plenty of time to sink into the slower rhythms of the island and to begin to explore working together again.

We spoke about how in the midst of our busy city lives, creativity only too often becomes a speculative act. In spite of the both of us using improvisation in our work we often find ourselves having to plan work well in advance and come up with something in the time that has been set aside for doing so. The generous ethos of the Bothy Project provided us with plenty of freedom, time and space to slow right down and delve into a much-needed state of stillness together allowing creative thoughts to emerge in their own time. 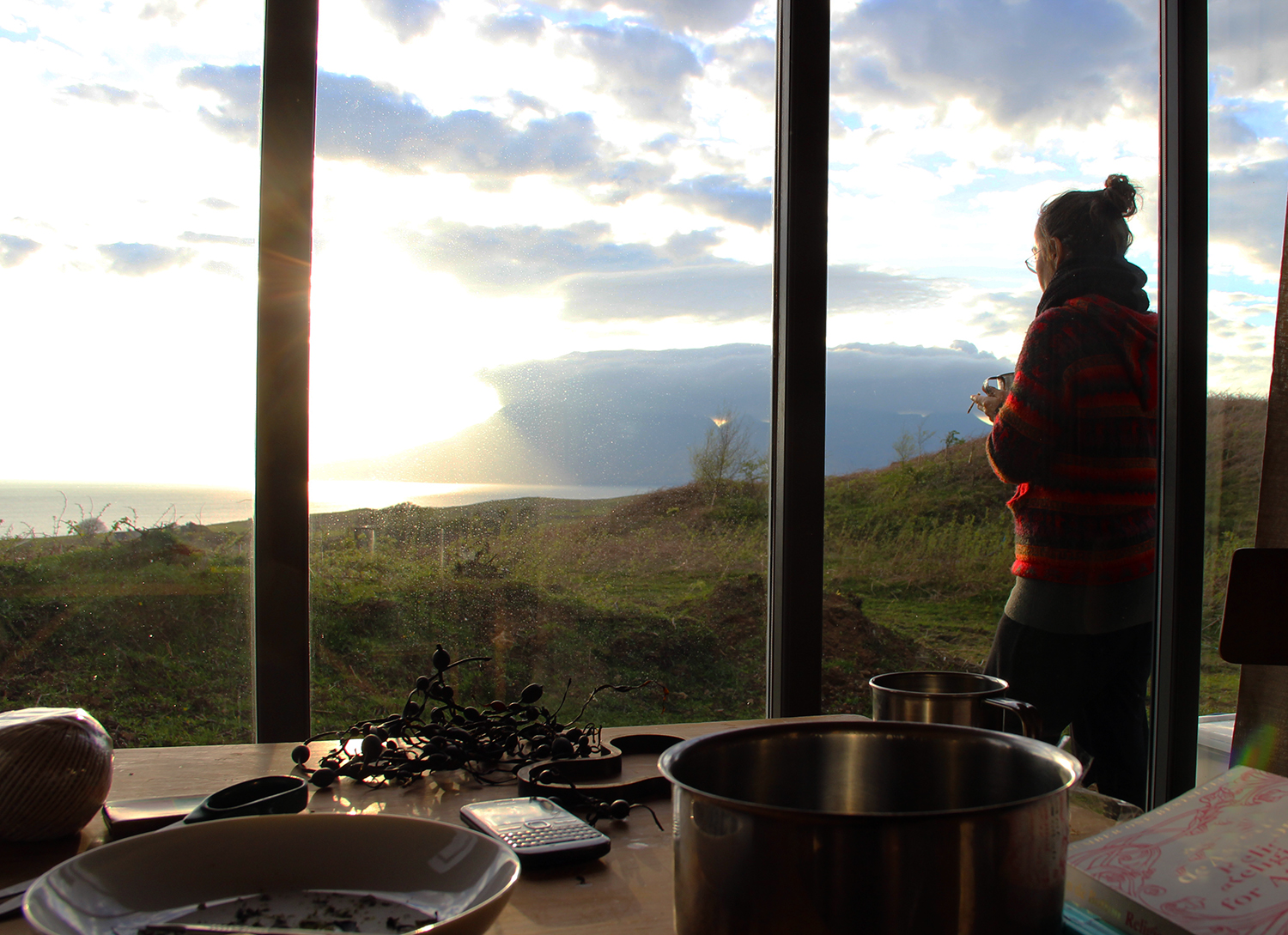 Sweeney’s Bothy is a piece of architectural poetry. The front wall – one big window facing a beautiful seascape and the mountainous Isle of Rhum, made us feel immersed in those dramatic everyday events – such as when day slowly turns into night and night to day, when heavy rain falls pass by when the gales are howling. The small window by the raised bed lets one fall asleep with a view of the starry sky to the calling of strange night fowls that echo through the valley and to wake up next to a small patch of bluebells that has been planted on top of the entrance.

Roughly carved hardwood ‘thorns’, drift wood banisters, a nook to curl up in on a rainy day and browse the bothy’s splendid little library, an outdoor shower and a hatch that can be opened allowing you to enjoy the  view whilst on the loo…. 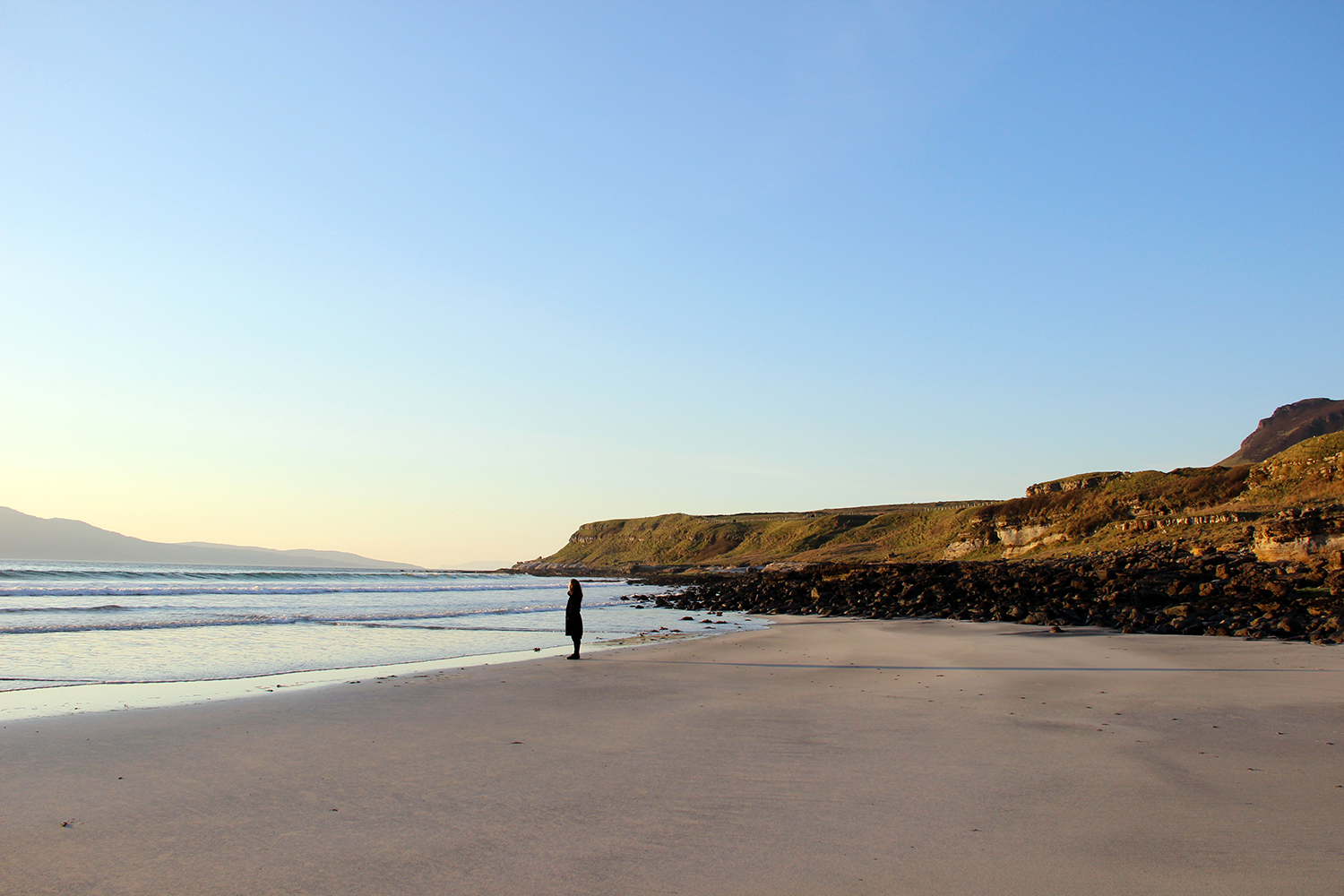 Alison and her shadow. Early evening on Laig beach 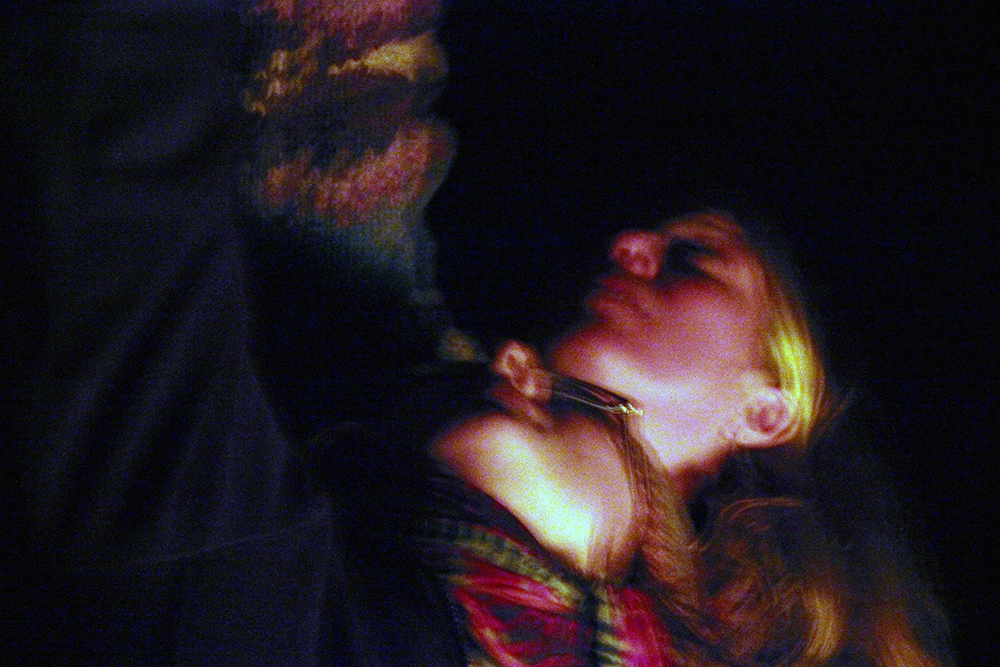 Megan and Kathryn looking at the stars at Megan’s bonfire party/leaving do on Laig beach. No rotten old visa law will keep this sailor lady away in the long run. 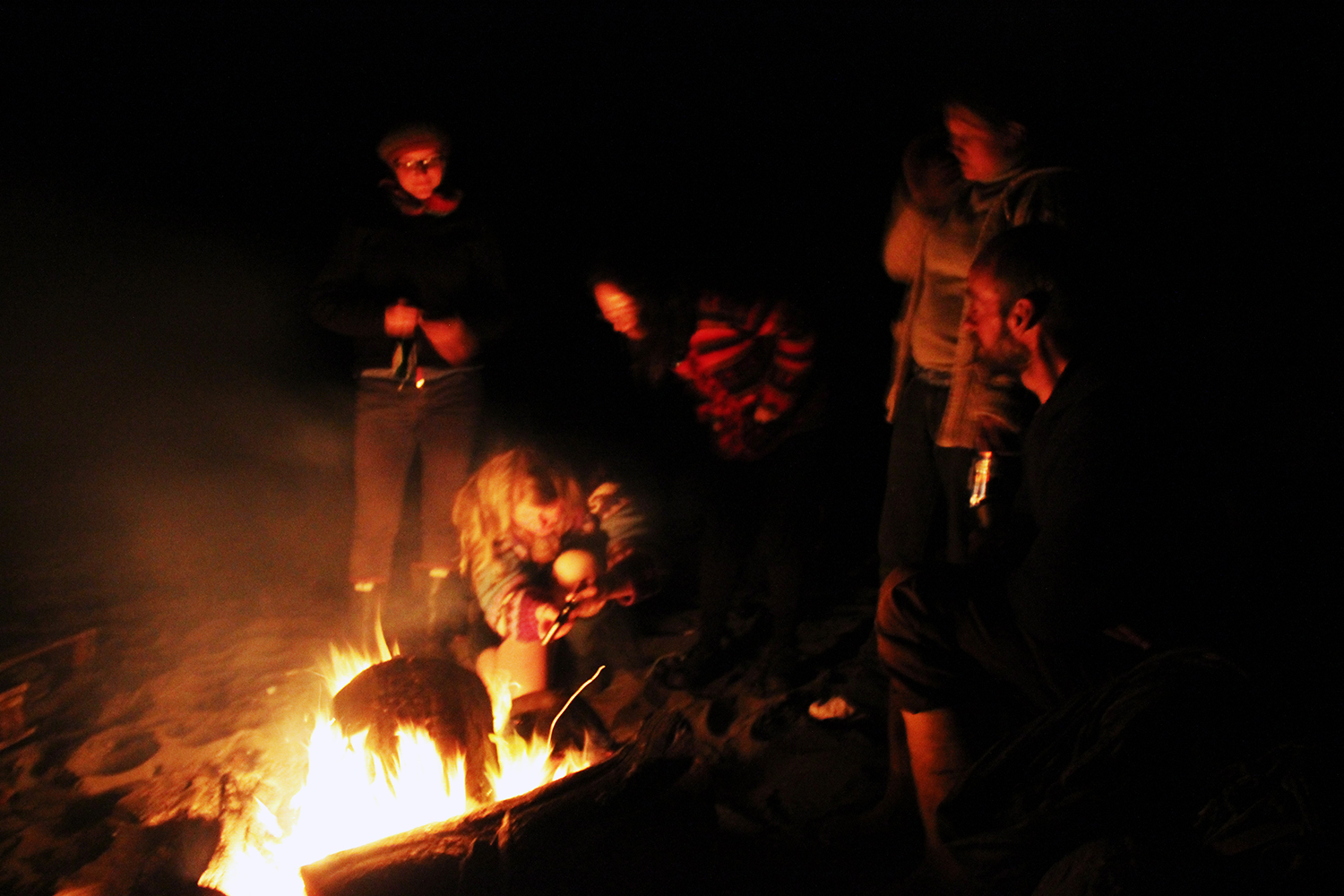 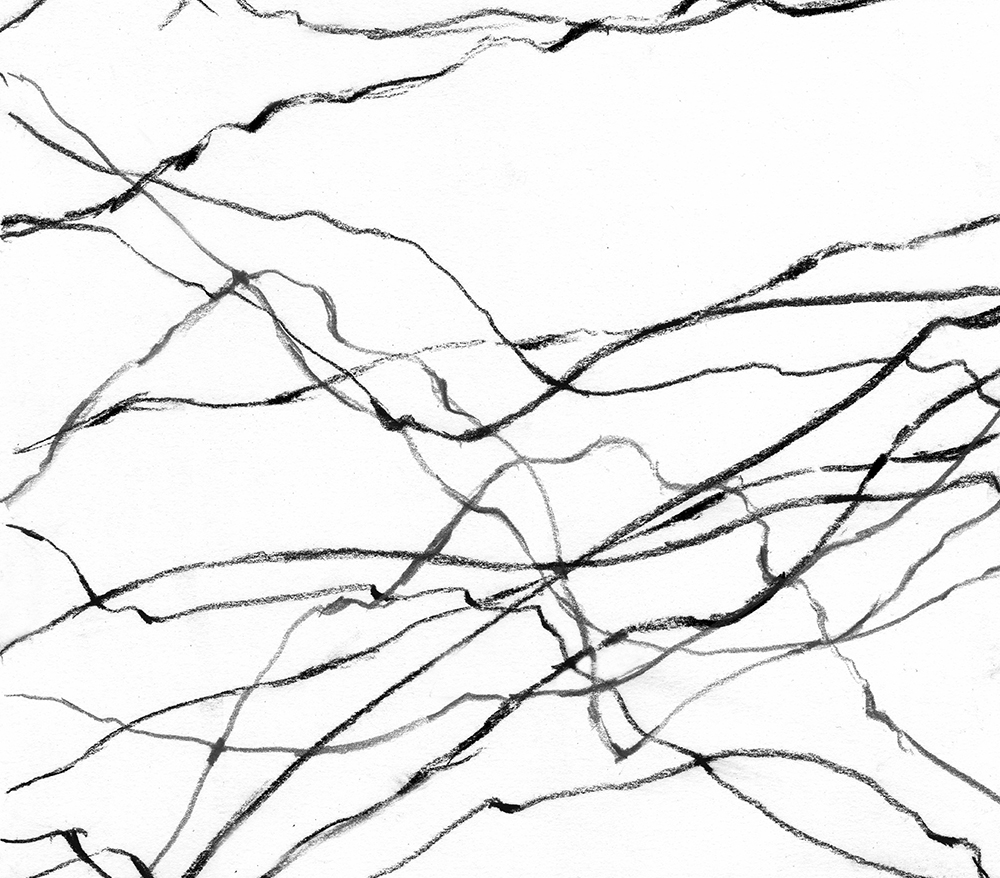 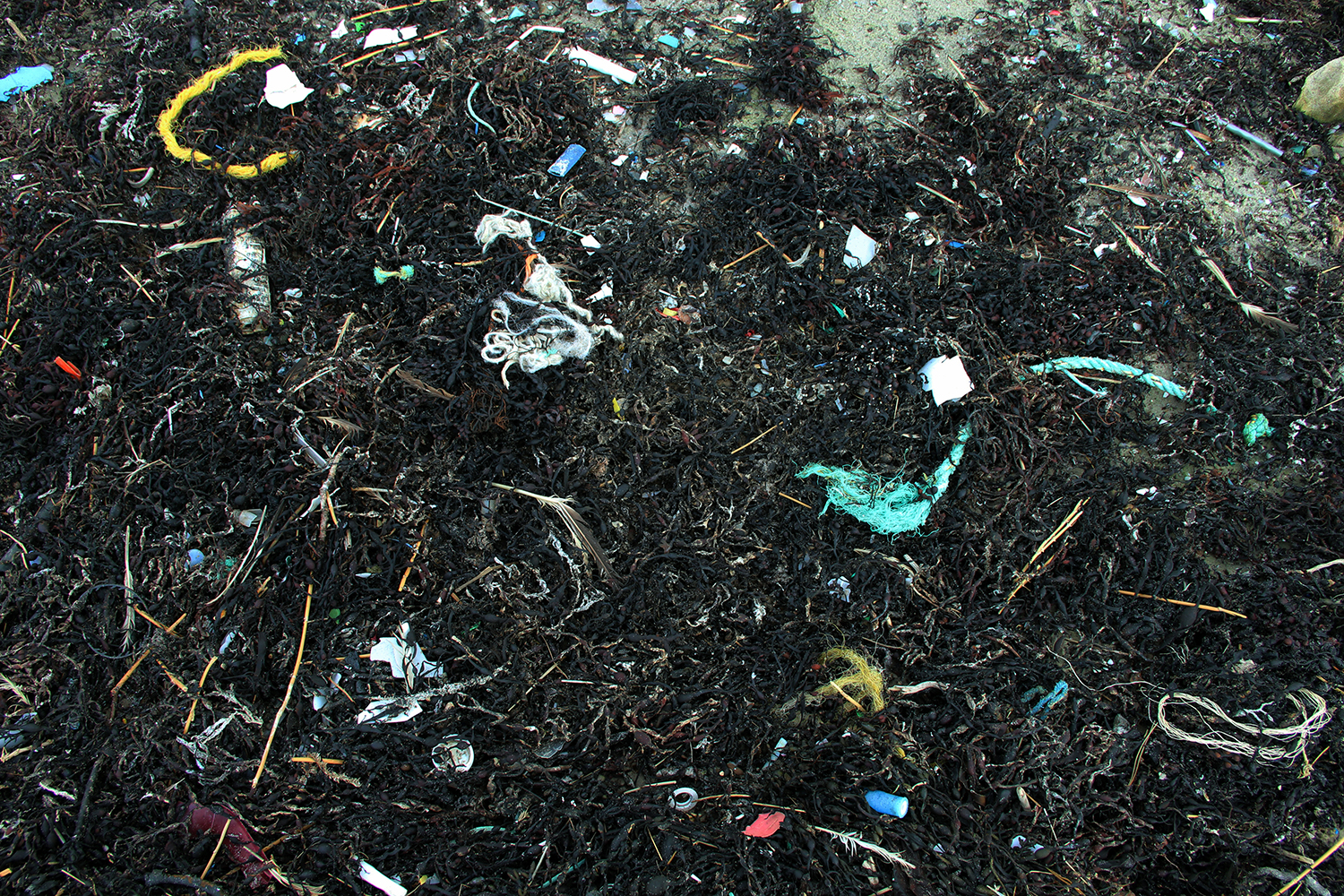 Like many other beaches Singing Sands and Laig Beach are full of plastic that keeps coming ashore. It’s dizzying to think that this material has been around for such a short time and that we already are drowning in it. 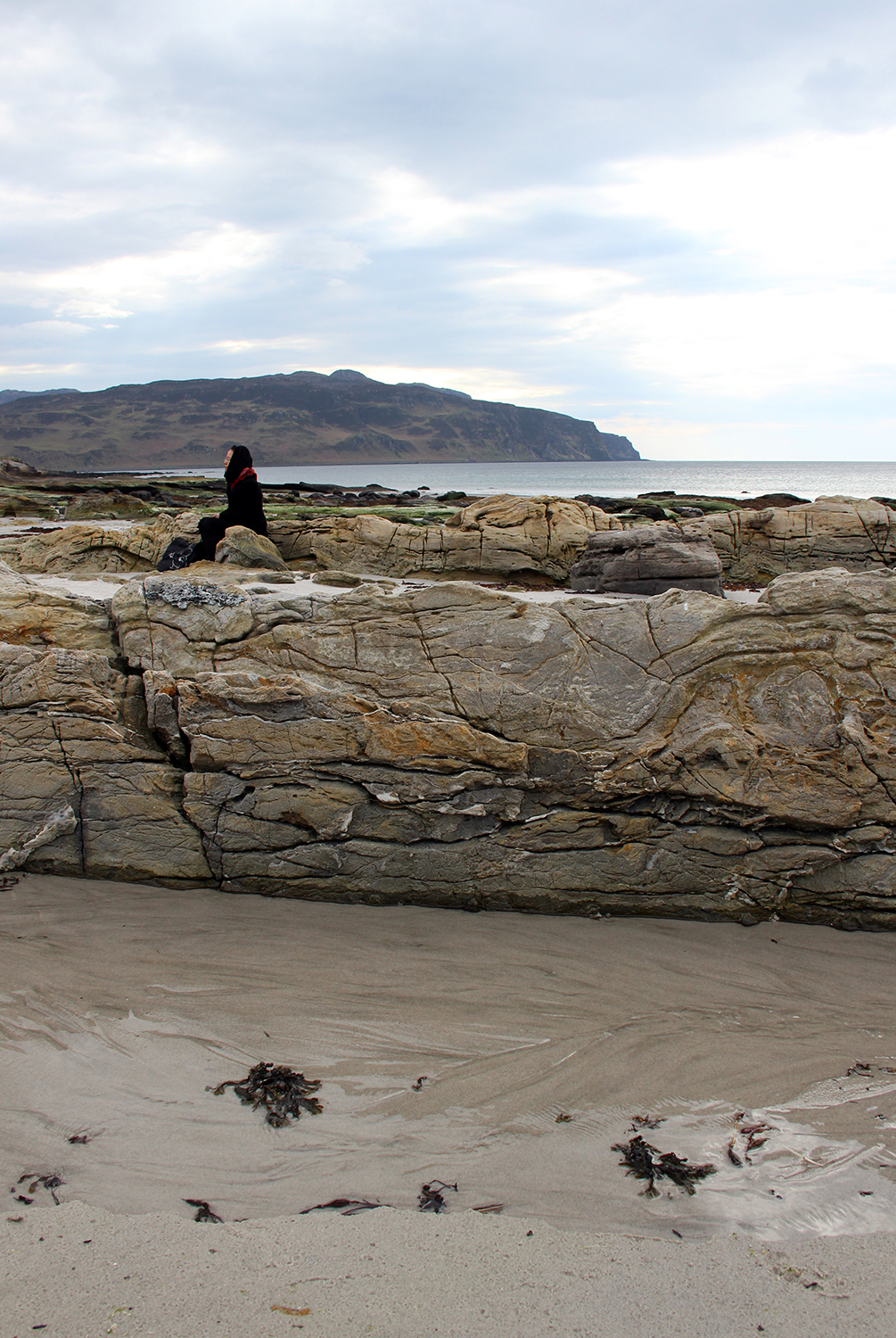 Long strands of old lava formation crossing the Singing Sands on their trajectory into the sea. 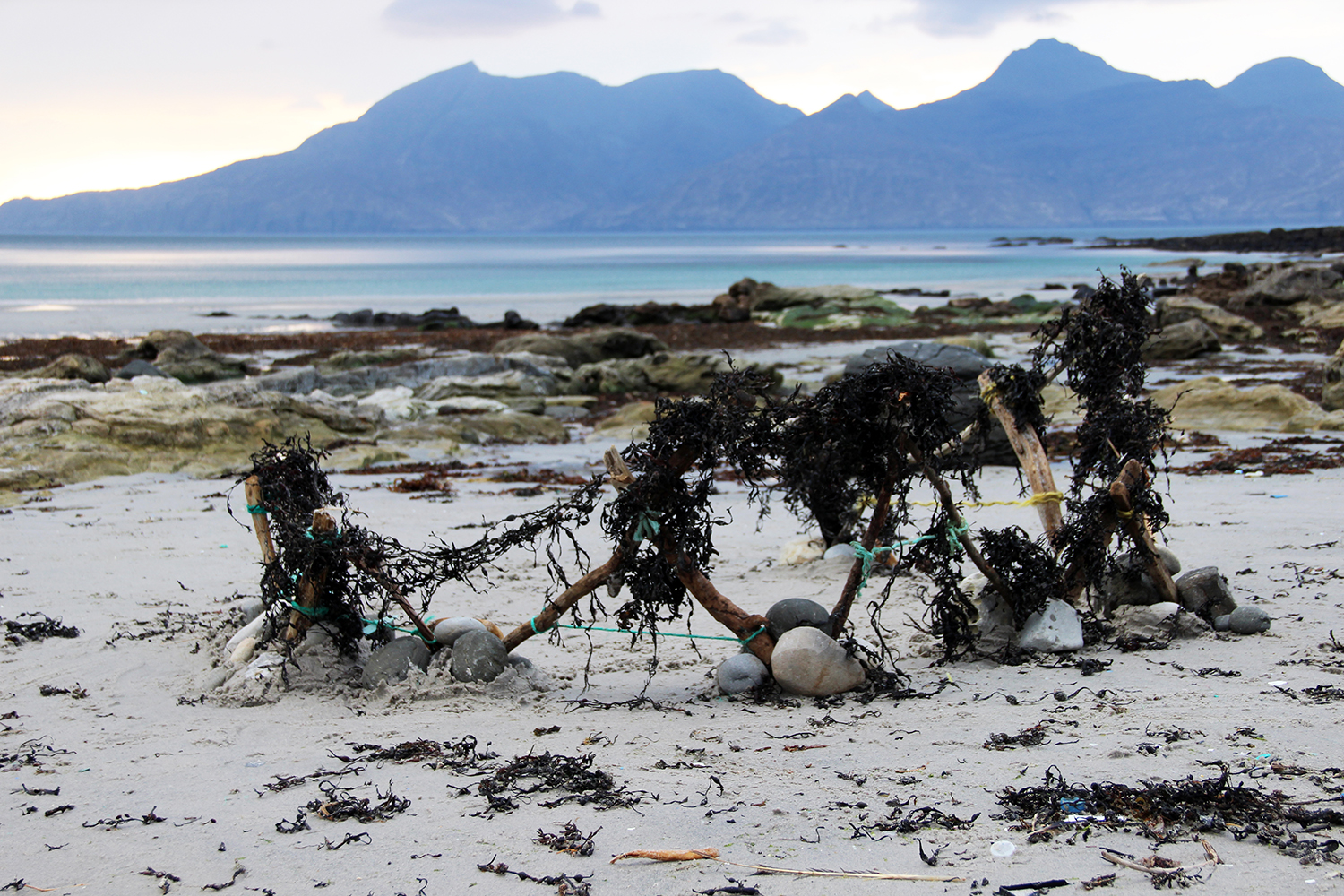 A throne for anyone who’ll take it – plastic, driftwood, stones and seaweed that rattles when the wind blows.

We loved Celia’s idea about getting a massive ‘plastic cooker’ and a giant 3D laser cutter installed so that you could make whatever you might need from all this beached junk. 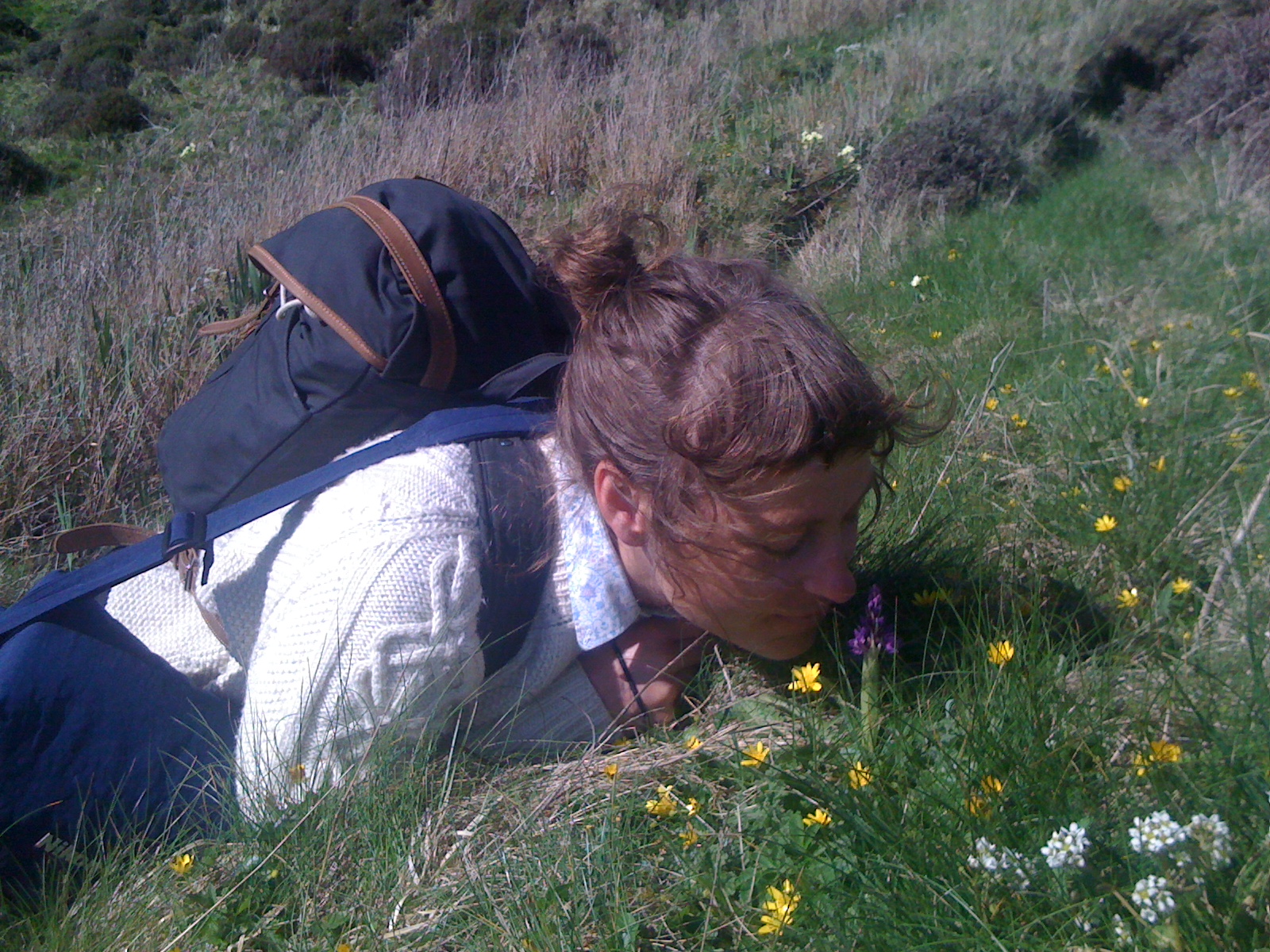 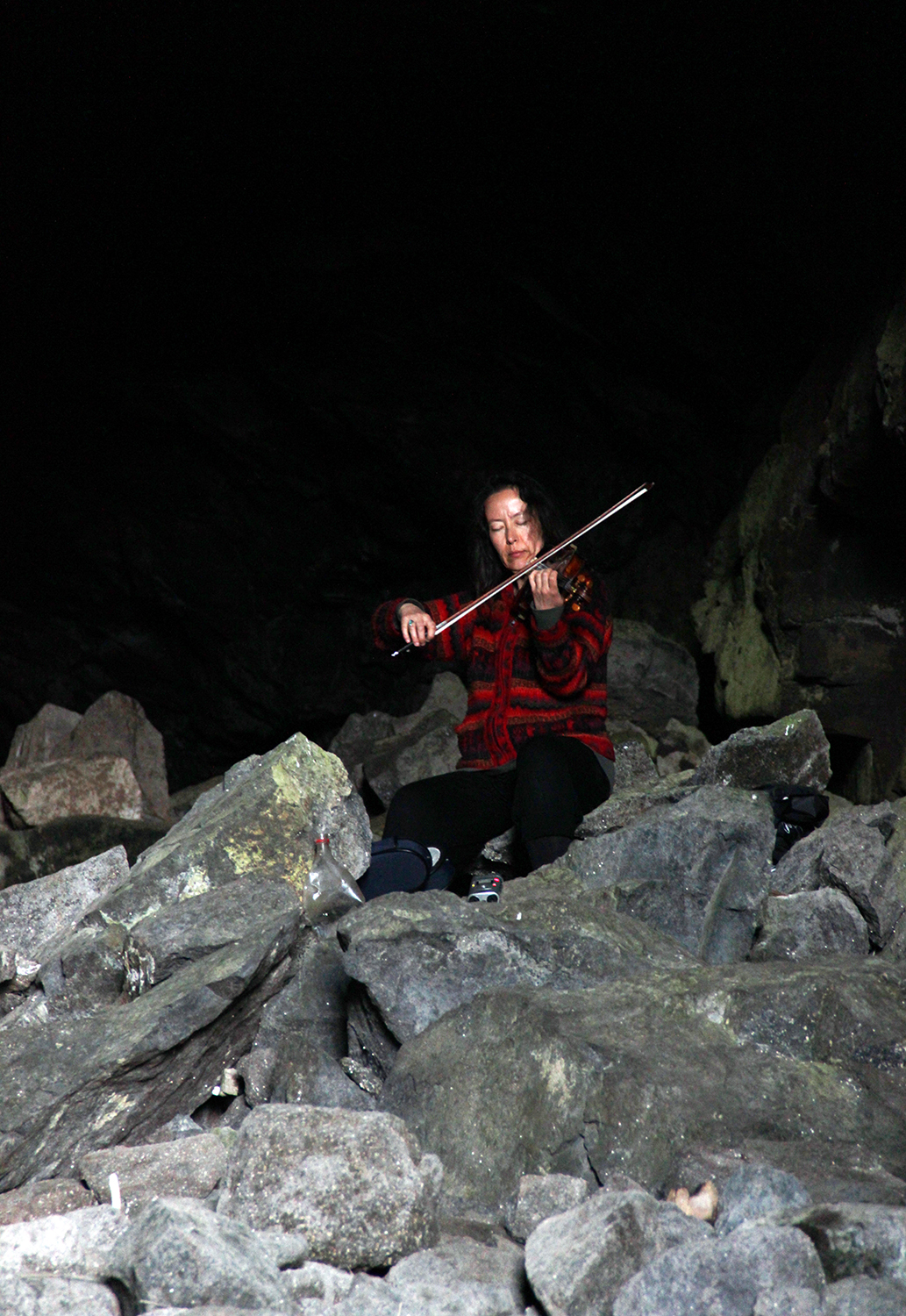 Alison had arrived ahead of me. The sounds from her violin filled the rocky cavity of Cathedral Cave and spilled out into the day.

Black sand dotted with what turned out to be polystyrene beads, ragged rocks and rounded stones covered the floor of the cave. Static electricity extended the un-choreographed patterns of the white plastic beads up the damp walls. Driftwood, twigs, feathers from different seabirds, buoys, pieces of plastic, shards of glass, a blink for sea fishing, lighters, plastic bottles, candles, carpenter’s cork containers, condoms, metal rods, the cadaver of a seal and other random junk had been swept in here by the tides or left behind by visitors. 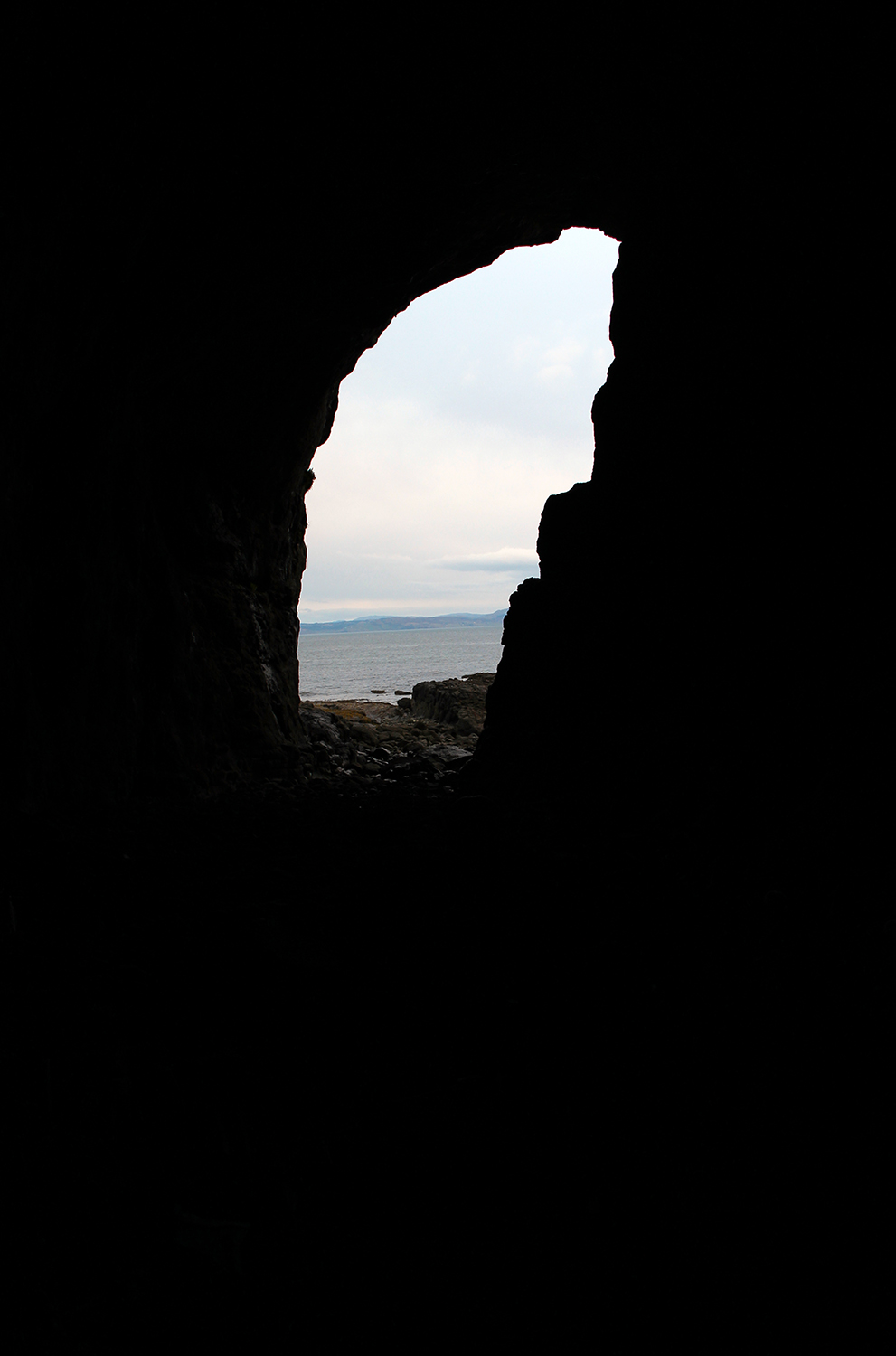 Dim daylight flooded in through the  entrance, causing anything in an upright position to casts a long black shadow towards the deepest bellows of the cave.

A few thoughts immediately announced themselves. The music performance should have an audience. The indifference of the great sea in terms of what it sends a shore… the beings in Plato’s cave contemplating a world of shadow plays… the return of objects to raw material and the death of living creatures….  the immense sadness at a world that is drowning in plastic… the empty rhetoric of contemporary politics…. an uprising of the inanimate world… countless long shadows…. revolution… ‘revolution is a dream’ (- as someone once said) … what’s wrong with dreams?

Everything that can stand will stand 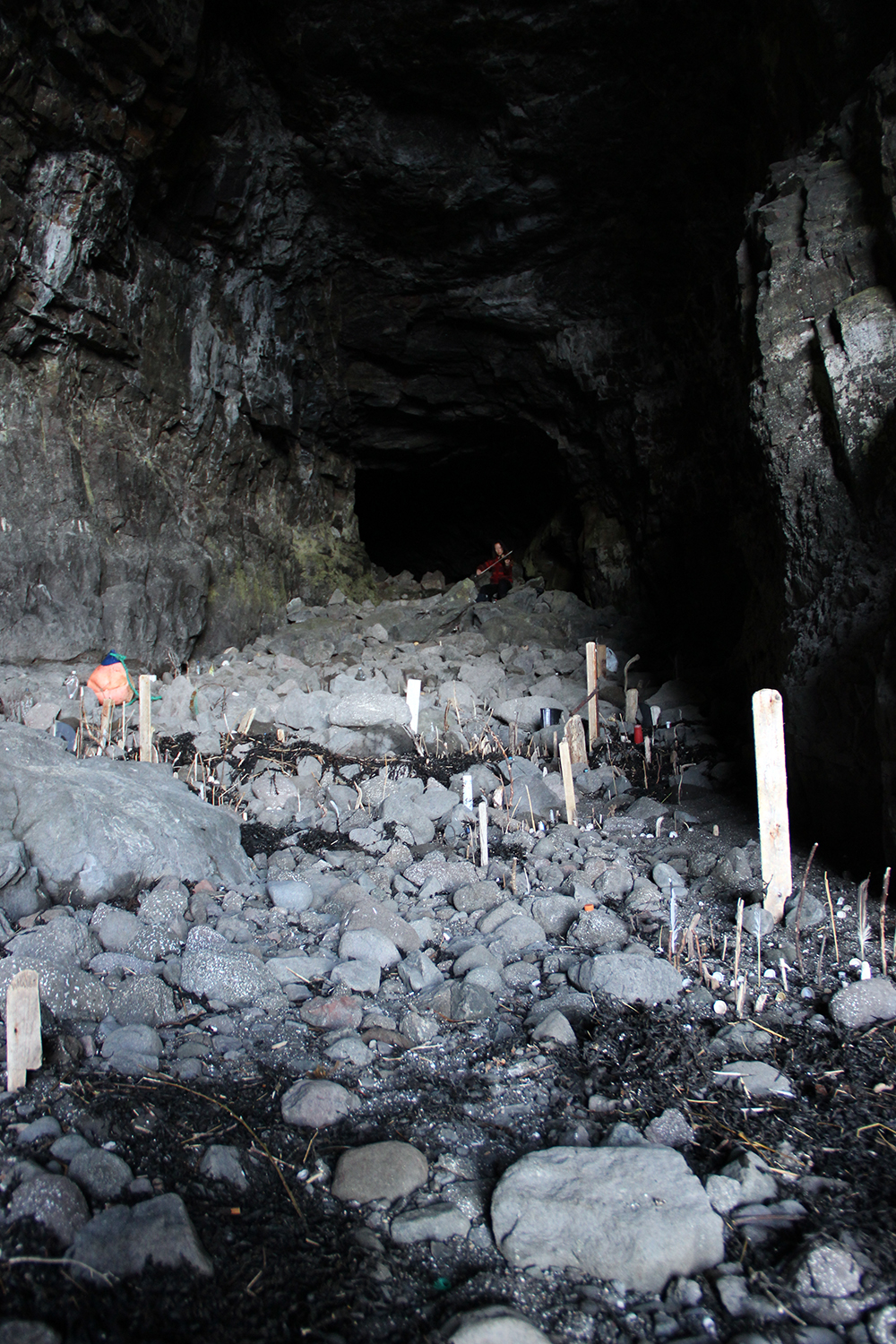 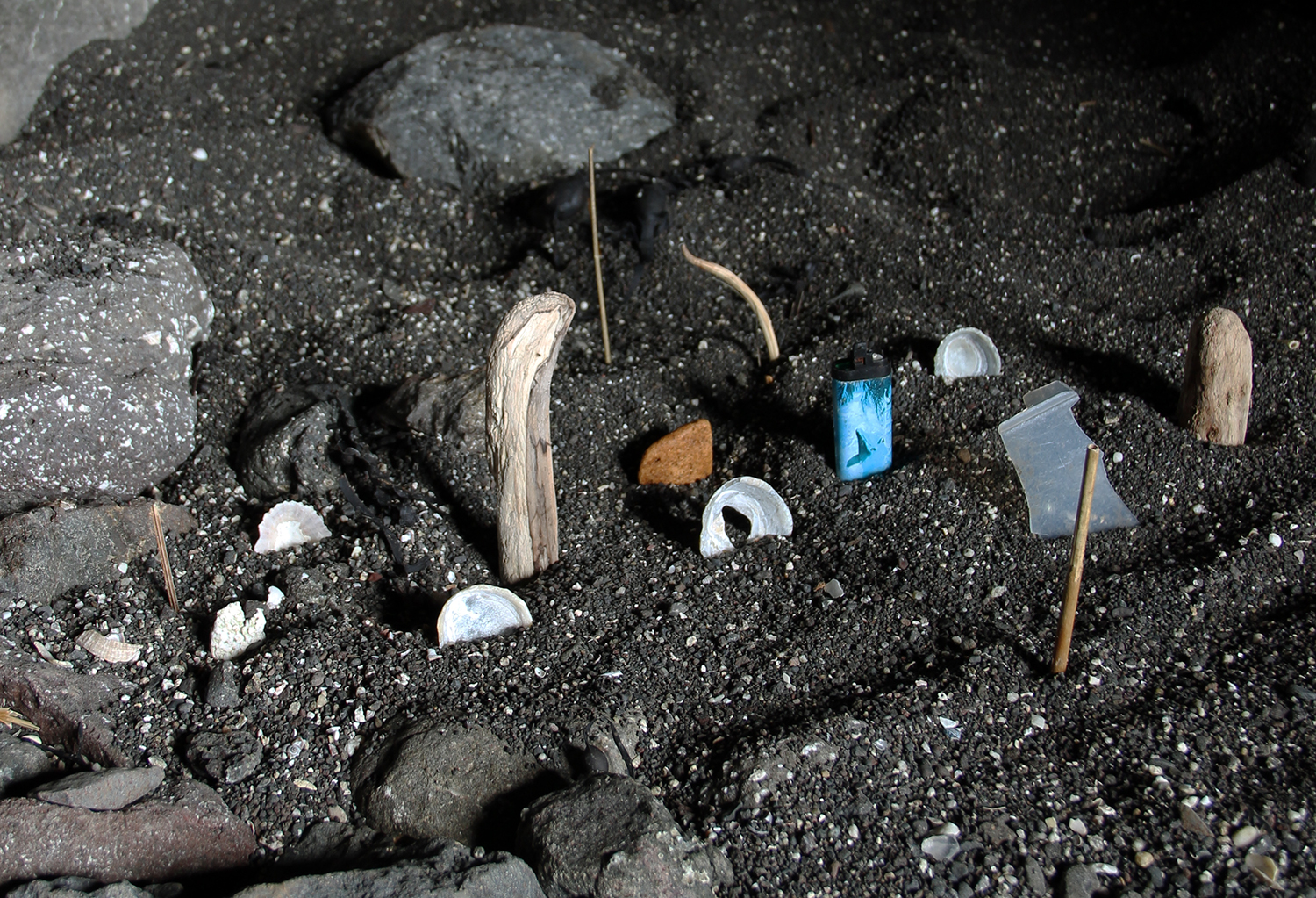 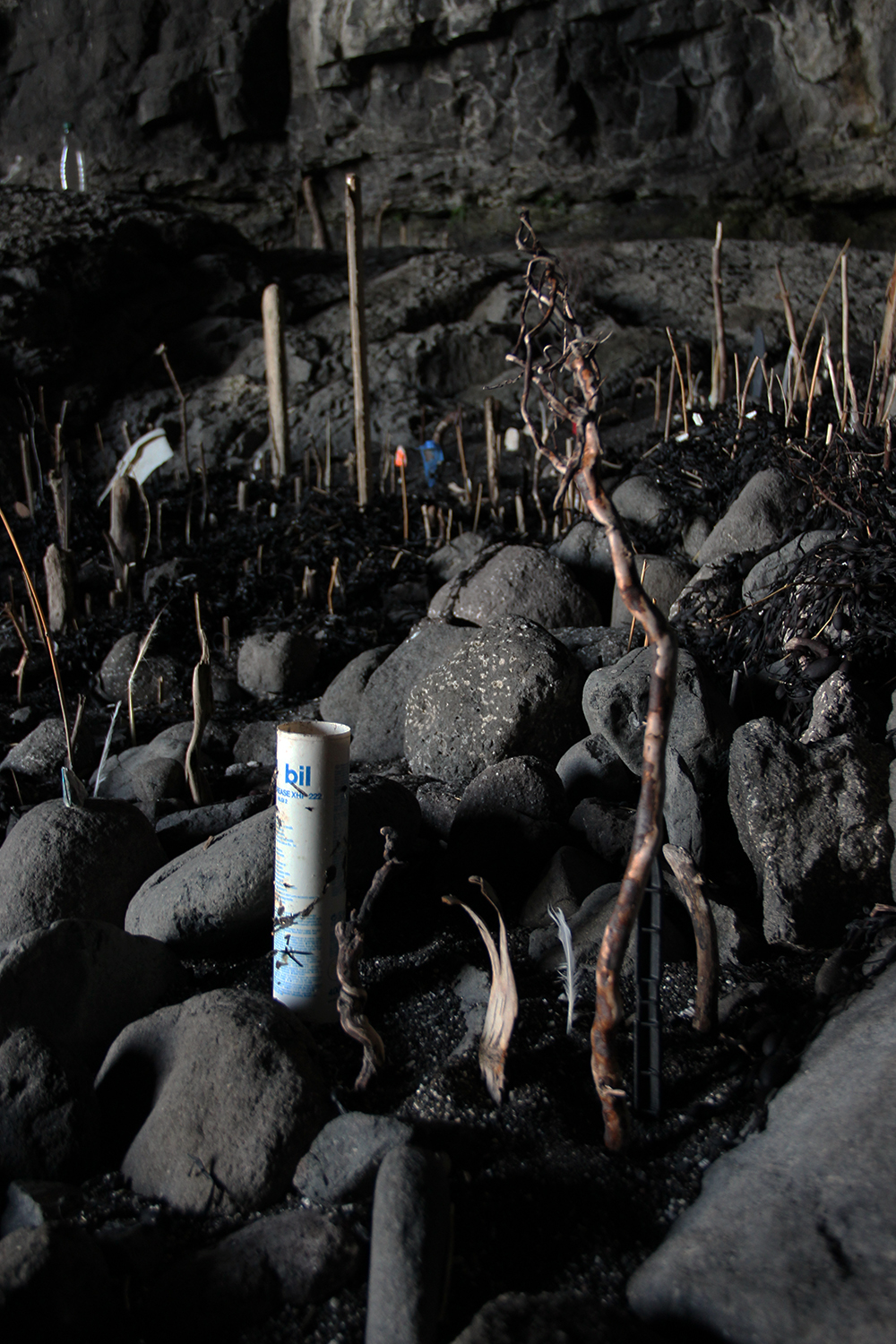 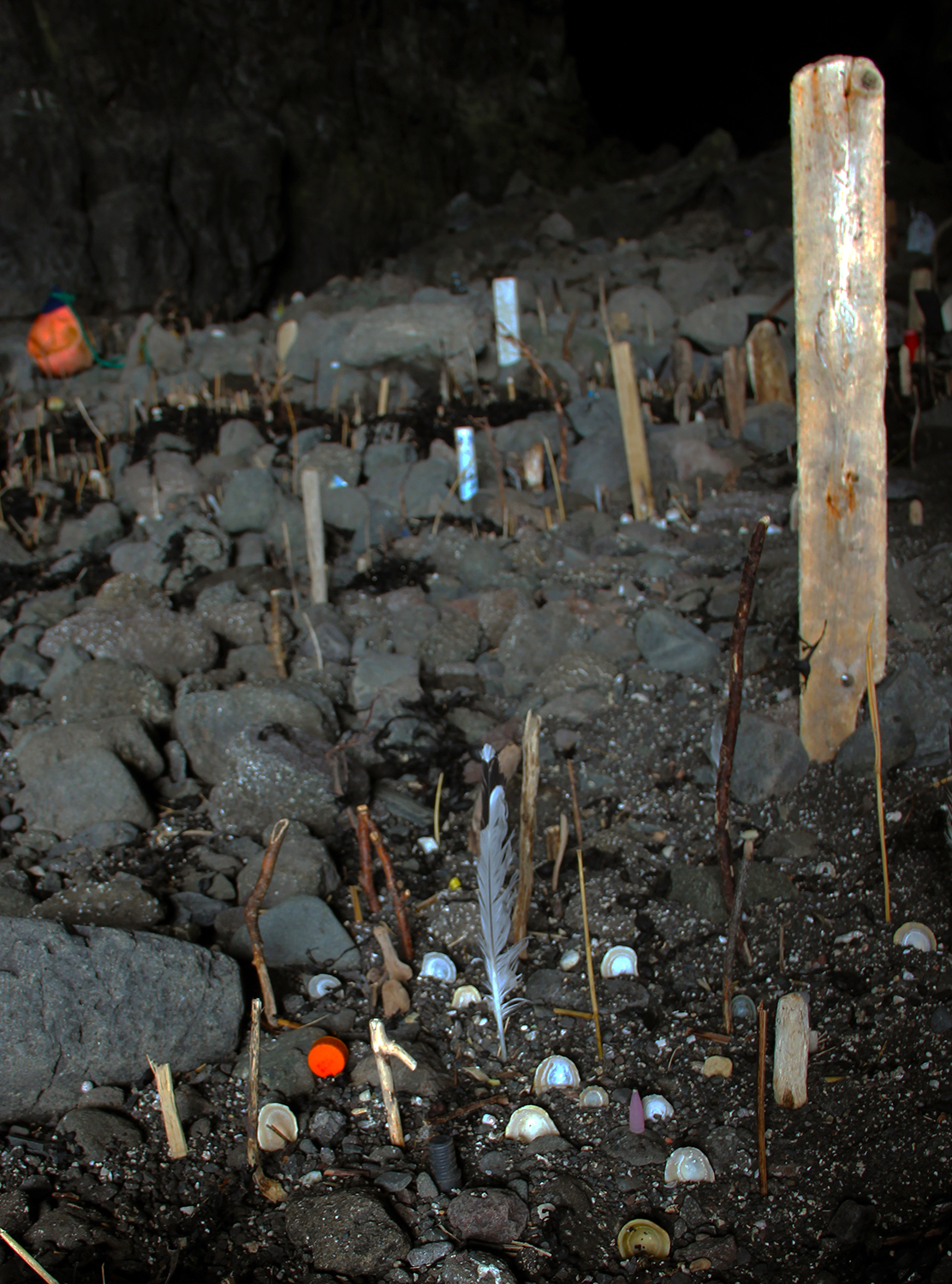 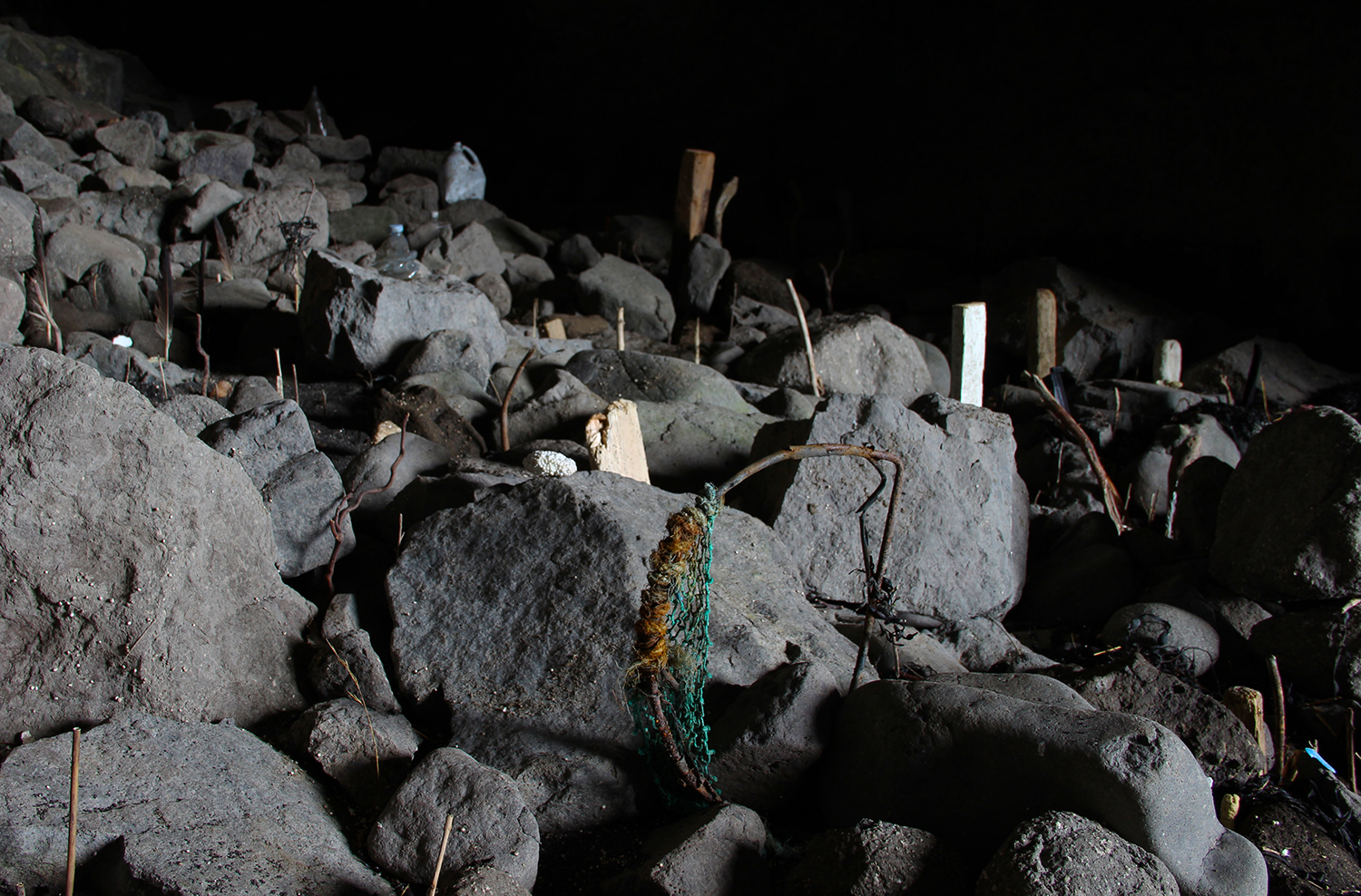 A  smell of rose scented shampoo 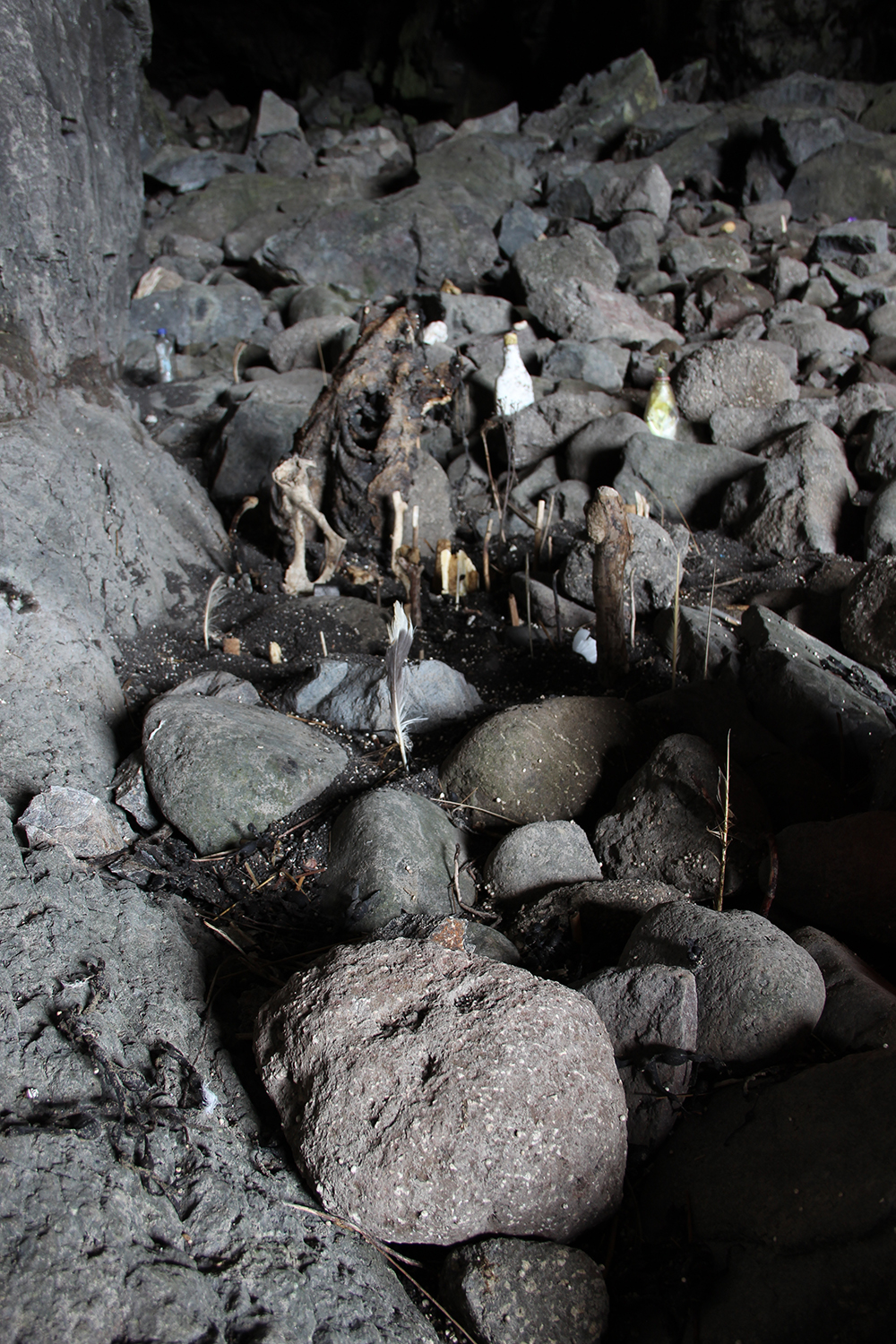 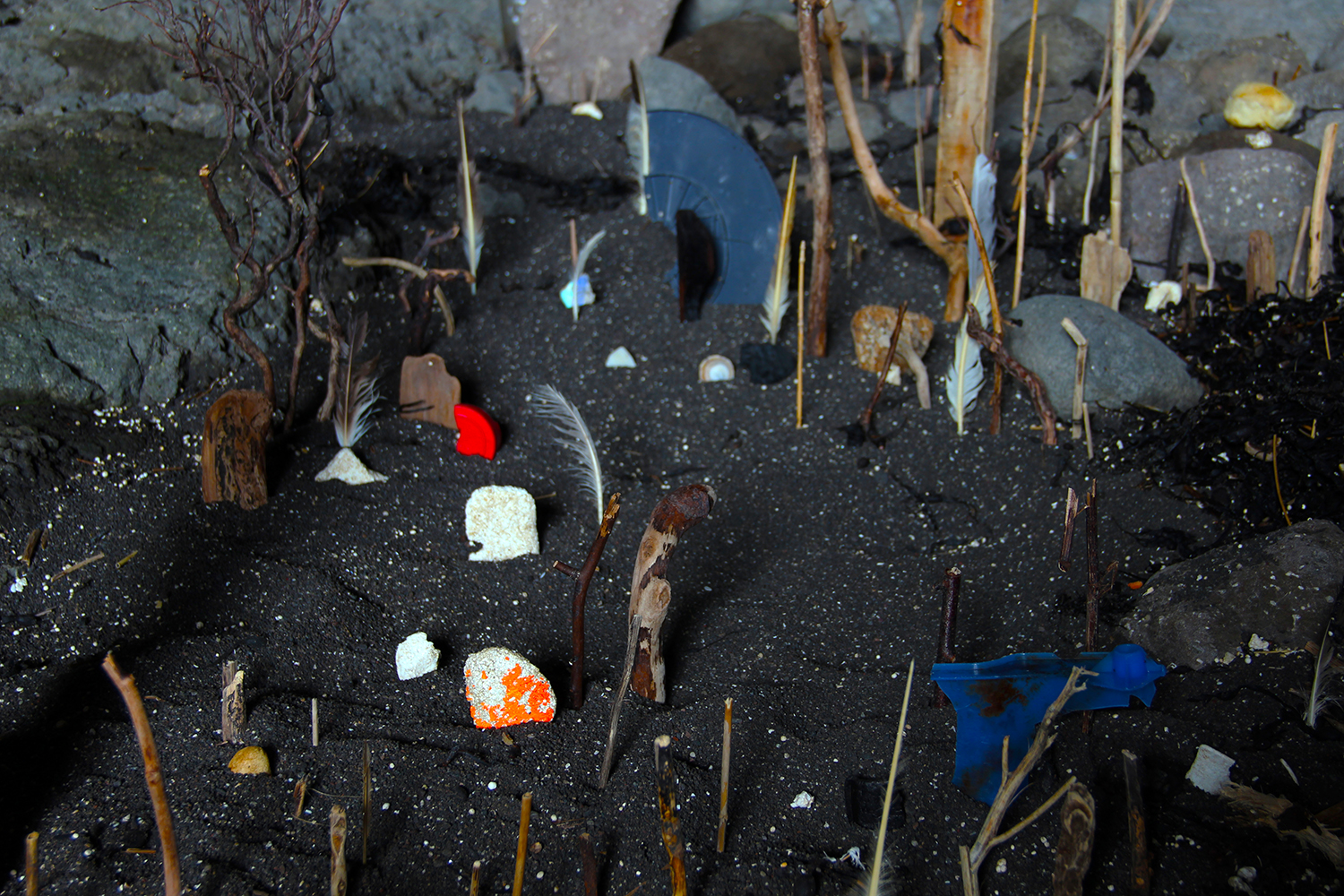 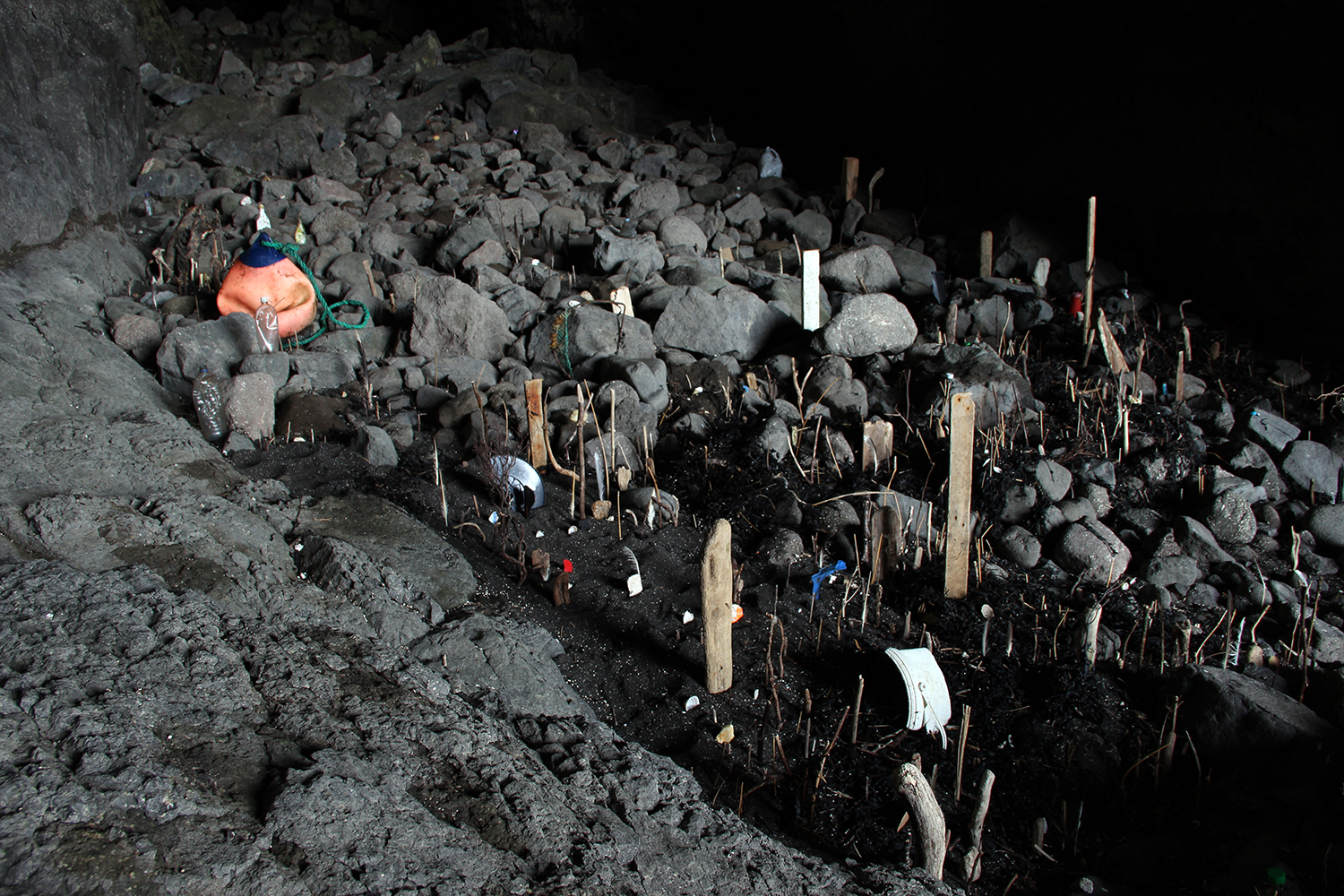 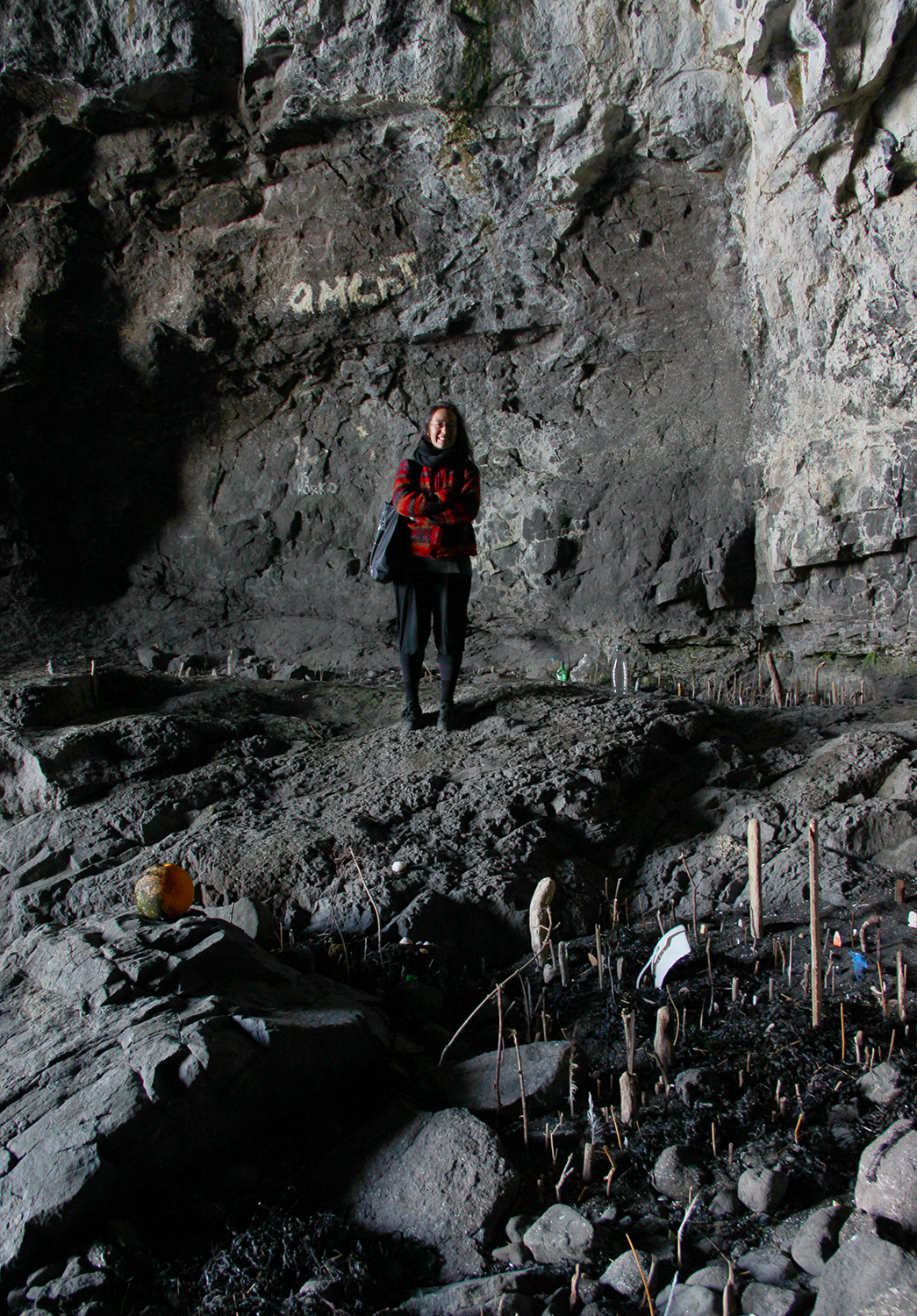 Alison beneath the ‘omlet’ cave-painting. 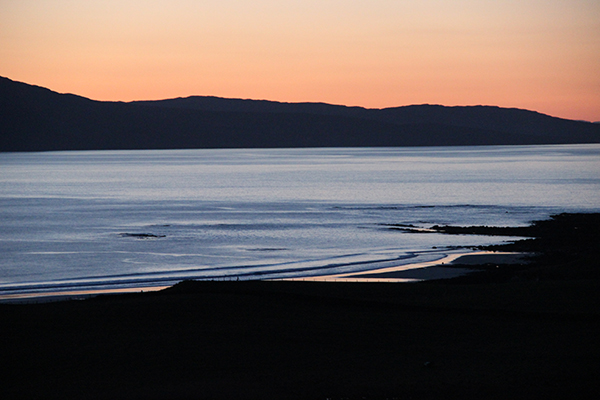 Wandering back to the bothy at sunset time. 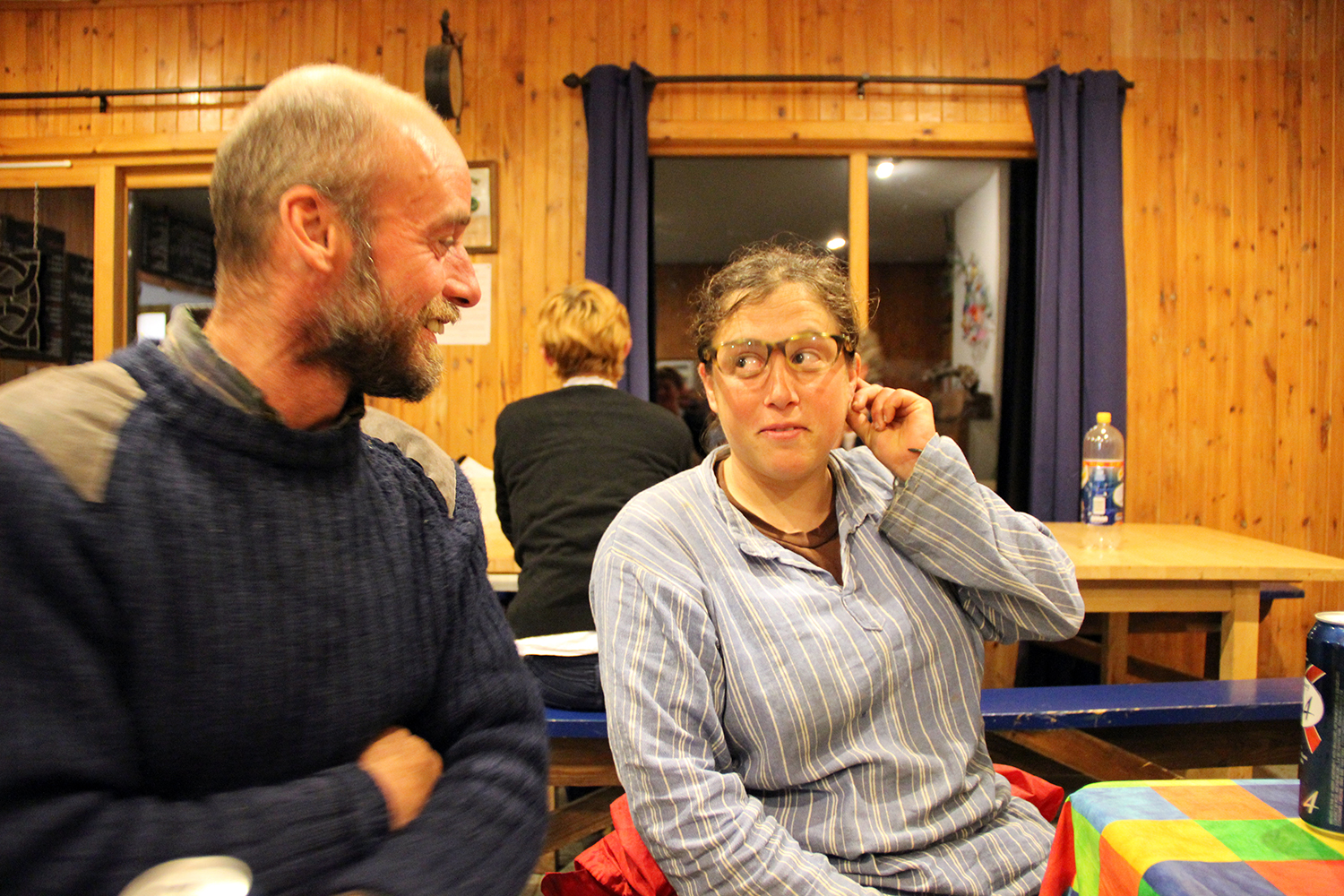 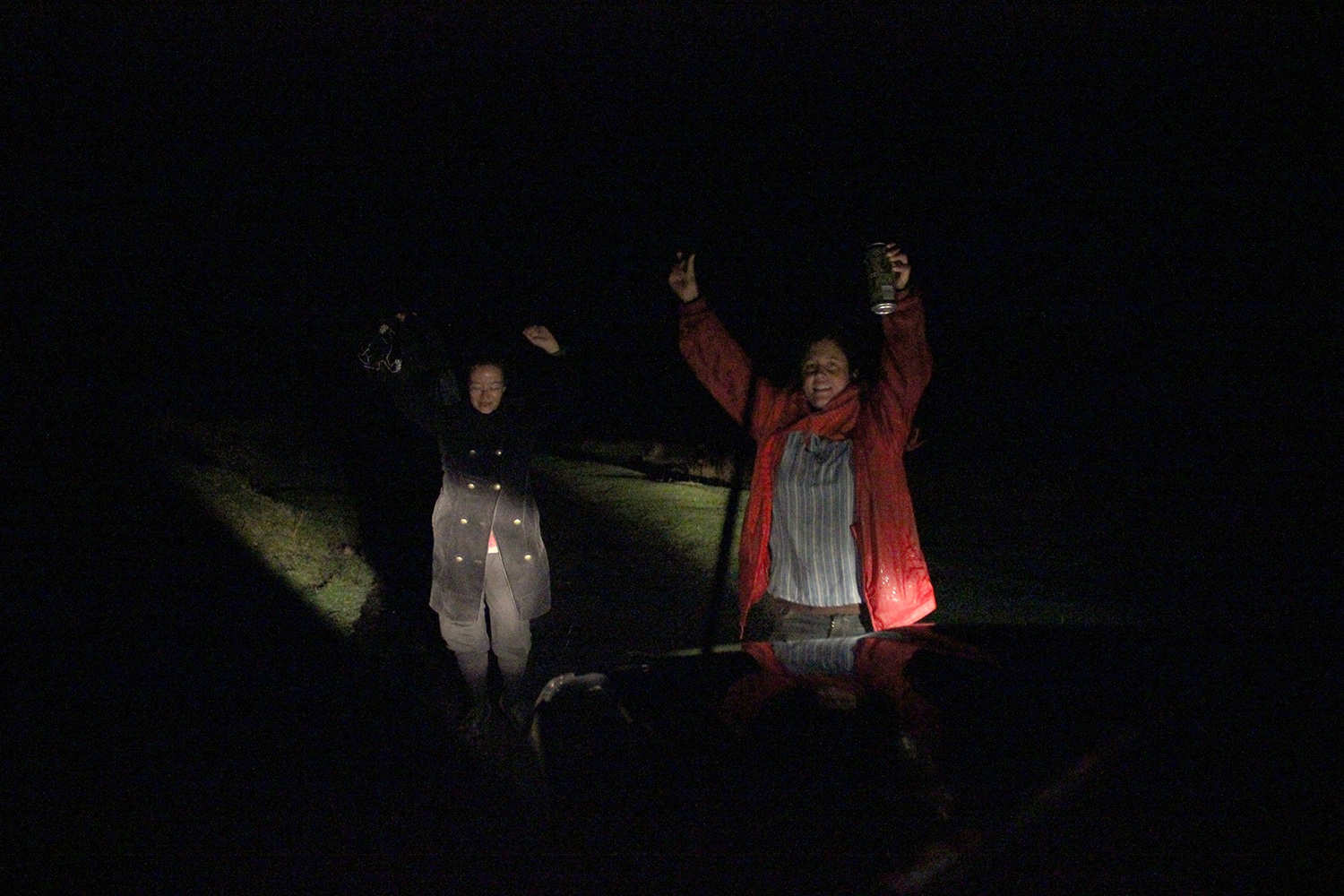 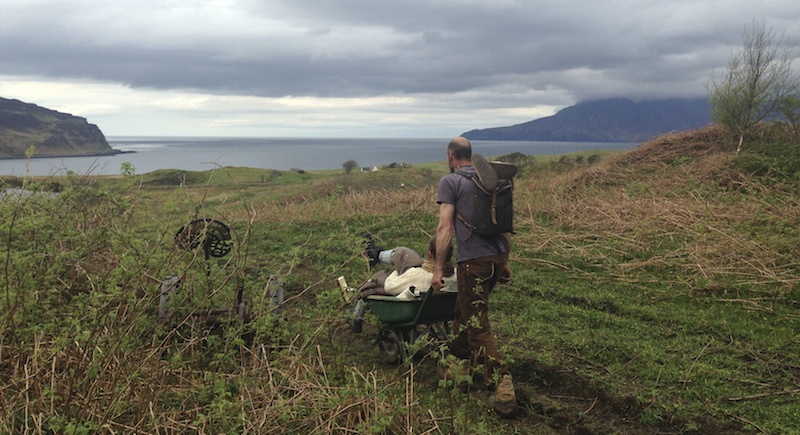 … led to the necessity of ‘dancer’s transport’. 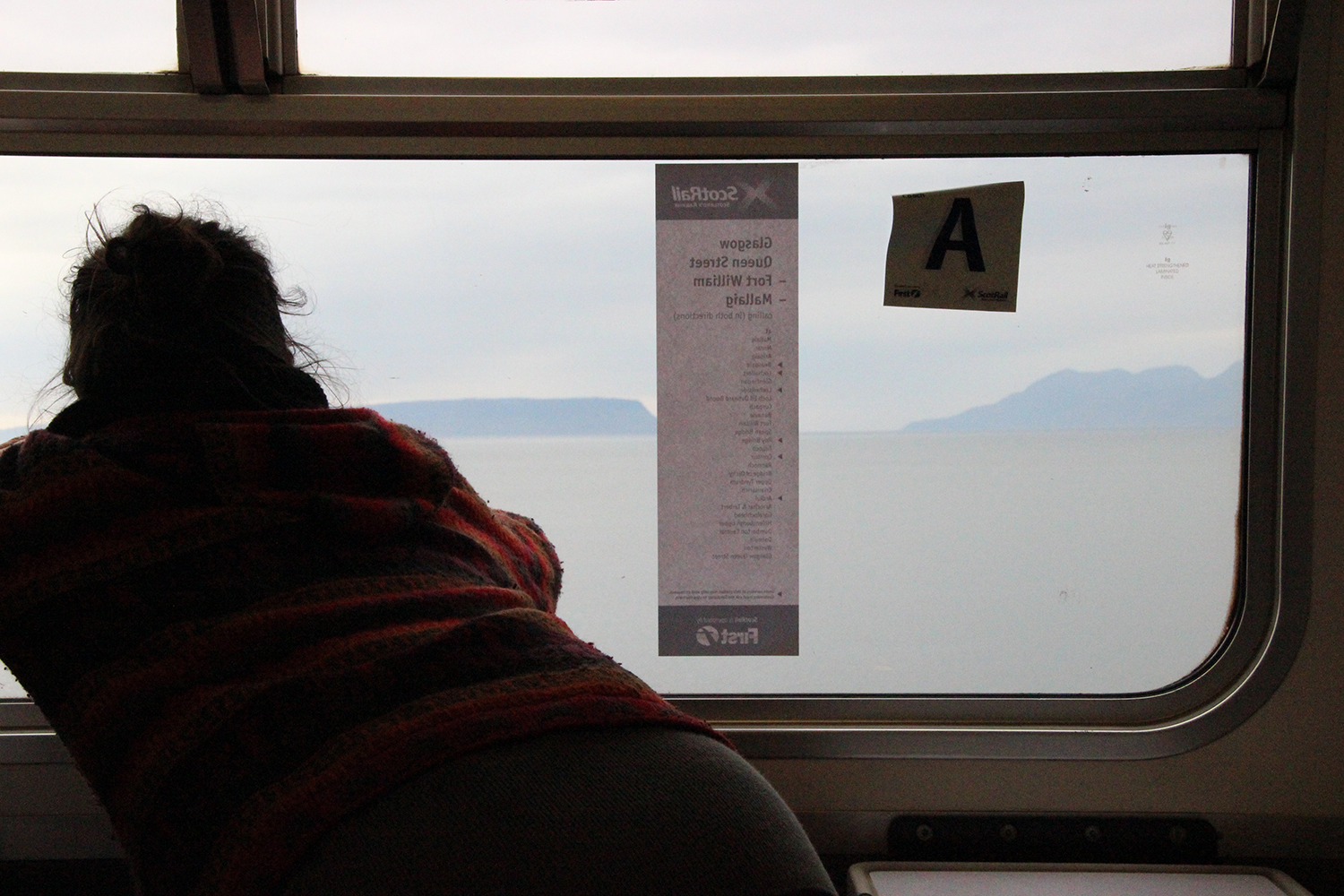 Alison looking at the Isle of Eigg from the train back to Glasgow. We didn’t really want to leave this precious gem of the Inner Hebrides and hope to find a way back soon.