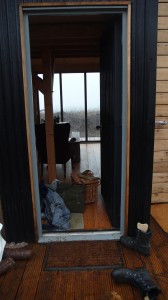 I cooked veg stew on the neat wee stove and lay on the wooden boards looking out at the mizzle sky and joined up raindrops on the window.

The last couple here (and only just left), filled the bothy with their lovers energy and I had come carrying sadness…may the wind take it away over the cliffs…

The sky lifted and light returned and I wandered up to the cliffs behind trying to find Sweeney. Later I returned to the tea rooms with fiddle for a great session as the wedding party continued. Back late again and with candlelight my spirit was flying.. 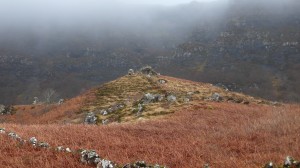 I took Trevor Joyce’s book ‘Poems of Sweeney’s Peregrinations’ with me to the Singing Sands. The light coming and going with the squalls. The rocks and sand swept smooth by the tide…soft and swirling. An eagle surprised me (and itself) flying up from the low cliff edge.

“Sweeney”, he began, “I find you here starved, naked on a branch  as any bird…”

A brighter morning and I took an early shower outside, looking up through the steam at two ravens hanging above the cliffs.

‘Deranged and rattled as a bird, Sweeney began his wanderings…”

I started some sketches for the sculpture of Sweeney. A blackbird had been brightly singing most mornings and so I decided upon this bird as a model for Sweeney’s head from which he will chant and sing his poem. I began welding a steel rod armature taking measurements from my own body. 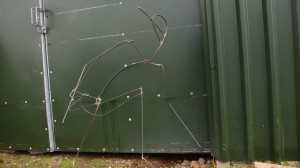 And soaked some peeled willow in a nearby burn which I will use to capture his vulnerable nakedness. 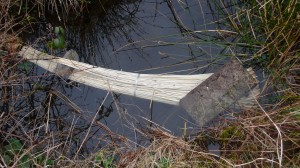 I felt a lightness as I worked, listening to the wrens and chaffinches singing and the ravens ‘kronk kronking’, remembering how I love this island and the magnificent cliffs up the back, the changing light and clouds, Rum coming and going. It’s good for me to be here and working too, staying in the warm, cosy bothy, Eigg supporting me.  And yoga in the morning as I wait for the burner to heat and boil my kettle. I am on a retreat…

Rain drives me inside to work, we squeeze into a space by the stove. Limbs are starting to shape. Sweeney is forming. 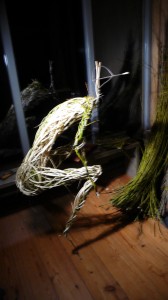 I had planned to site the sculpture roosting in a tree but suitable sized trees are scarce on Eddie and Lucy’s croft. I climbed the small hill behind the bothy to survey the land, placing Sweeney on the large stones there…he fitted perfectly astride one of them as though on a throne and looking disturbed as if surprised by approaching visitors. 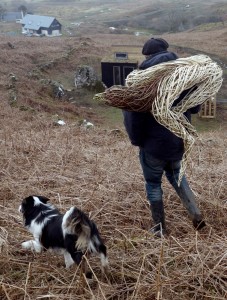 A break from Sweeney and I’m over the other side of the island running a willow workshop with 7 or 8 islanders all cheerfully creating platters and baskets and there is a plentiful supply of tea and cake. Nice to be with people again. Also I get a mobile signal and there is a heap of messages that will have to wait!

Wild night in the bothy as a storm picks up and there is a gale. The smoke from the stove takes a dive and fills the room up…I sleep with the door open and with the wind seeking me out…. 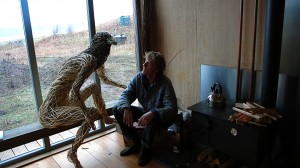 The storm has dropped away I continue weaving. I use naturally green coloured willow for Sweeney’s blackbird head and introduce some red willow into the peeled to suggest the lacerations he received whilst trying to roost in the blackthorn tree. Wes, Ben and Jen arrive with blackthorn bushes that Wes has grown and we plant them around the hill top by the sculpture. 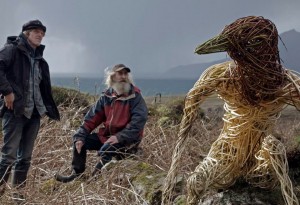 Gales and hail stones return and Rum now looks very wintery and with the peaks covered in snow, they seem higher and nearer.

I’ve secured Sweeney to his throne, using steel pins to anchor him to the rock. The wind today is very strong and I wonder if he will manage seven years this time round or will he be swept up and blown high over the cliffs, his sad chant echoing along at night like the summer shearwaters returning to their roost…

The week has passed and I am sad to leave but I’m also happy and grateful to feel reconnected with Eigg and the community living here, with the good friends I have, and know that I will return. 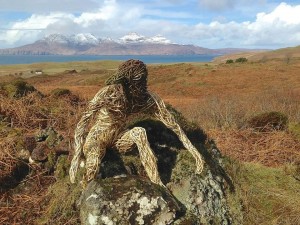