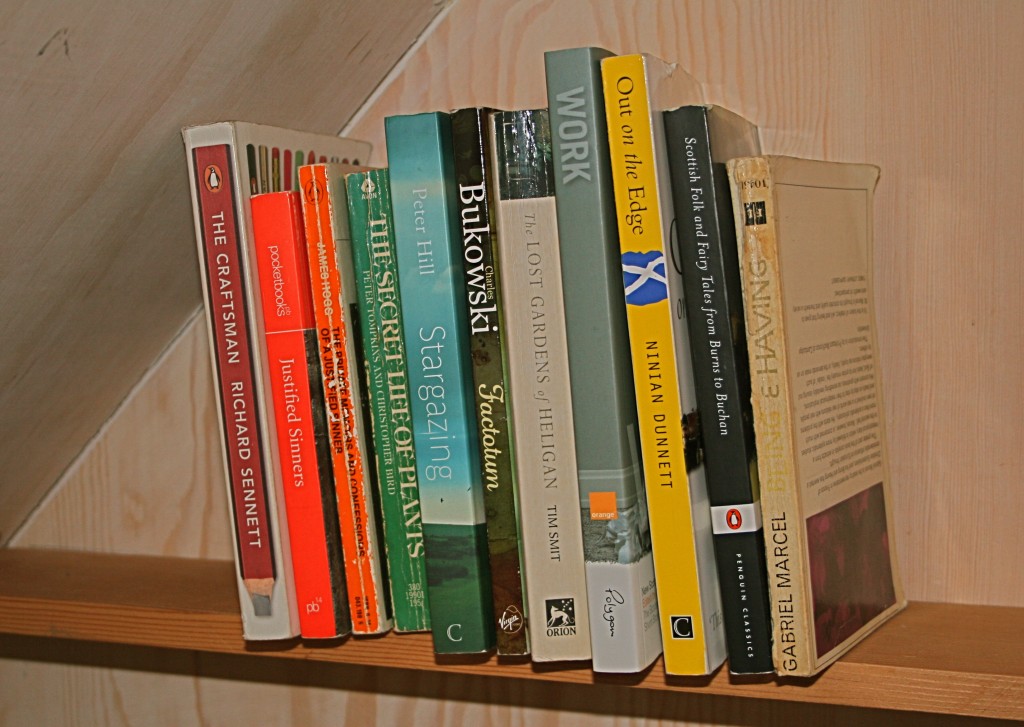 /
One of the aims of Bothan Suibhne is to broadcast new knowledge and ideas, as well as host residencies. Each of the contributors has their own mind-map of bothys, huts and the tradition of the simple dwelling; sharing books, we learn from one another. Some of Bobby’s and my first conversations sketched an ideal library for the bothy and together we started work on a booklist – books on Sweeney himself, the worldwide ancient hut tradition, philosophy, a Gaelic dictionary, and so on.

Now we have commissioned Dee Heddon and Misha Myers to continue their Walking Library project, sharing books by taking them on a walk.

Dee and Misha will lead a public walk, over two days, June 14-15. You are welcome to do the entire walk with them or join for only part of the way.

The walk will set out from Carbeth, heading South into Glasgow and ending at the Walled Garden for tea, library browsing, and book-reading.
/
(AF) 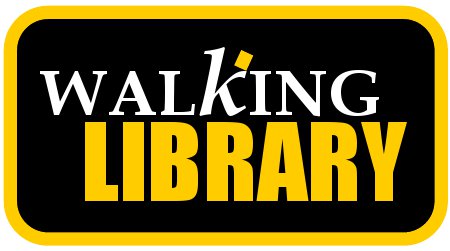 In 1794, John Hucks and Coleridge walked to North Wales. Hucks carried with him the poems of Thomas Churchyard.

In 1802, Coleridge walked through Cumberland, carrying with him ‘a shirt, a cravat, two pairs of stockings, tea, sugar, pens and paper, his night-cap, and a book of German poetry wrapped in green oilskin.’ He apparently read the Book of Revelations in Buttermere.

In 1818, Keats travelled the Lake District and up to Scotland with his friend Charles Brown. Keats’ carried Dante’s Divine Comedy, Brown the works of Milton.

In 2012, Walking Librarians walked an imaginary journey to Bothan Suibhne, carrying with them….

/
Books and walking have a long history. The Walking Library is an ongoing art project that seeks to bring together walking and books – walking, reading, reflecting, and writing.

The Walking Library took its first walk as part of the Sideways Festival, a peripatetic arts festival that walked 333km from the West to the East of Belgium. For that journey, we asked a general question: ‘what book would you take on a walk?’

The walk for Bothan Shuibhne – a dwelling that is still largely undefined – prompts different questions:

What book would you carry to Bothan Shuibhne – however you imagine it – for both the journey and your arrival?

What book would provide you with shelter? Of solitude or companionship?

What book is a guide or a book to get lost with?

With spines upturned books too shelter worlds. Books as bricks, sometimes as heavy. Leaves that shade. Windows, hearths and thresholds to other times and places.

Though this walk won’t actually take us to Bothan Shuibhne, it will be made with it in mind. We will gather and carry a hand-picked selection of books that will be donated to the Bothy.

We invite you to bring a book for the Walking Library rucksack and join us on the walk that will take place over two days (14-15 June). On Day 1 we will walk from Carbeth to Milngavie; on Day 2 from Milngavie to the Walled Garden. You are welcome to join us for the entire walk or only part. 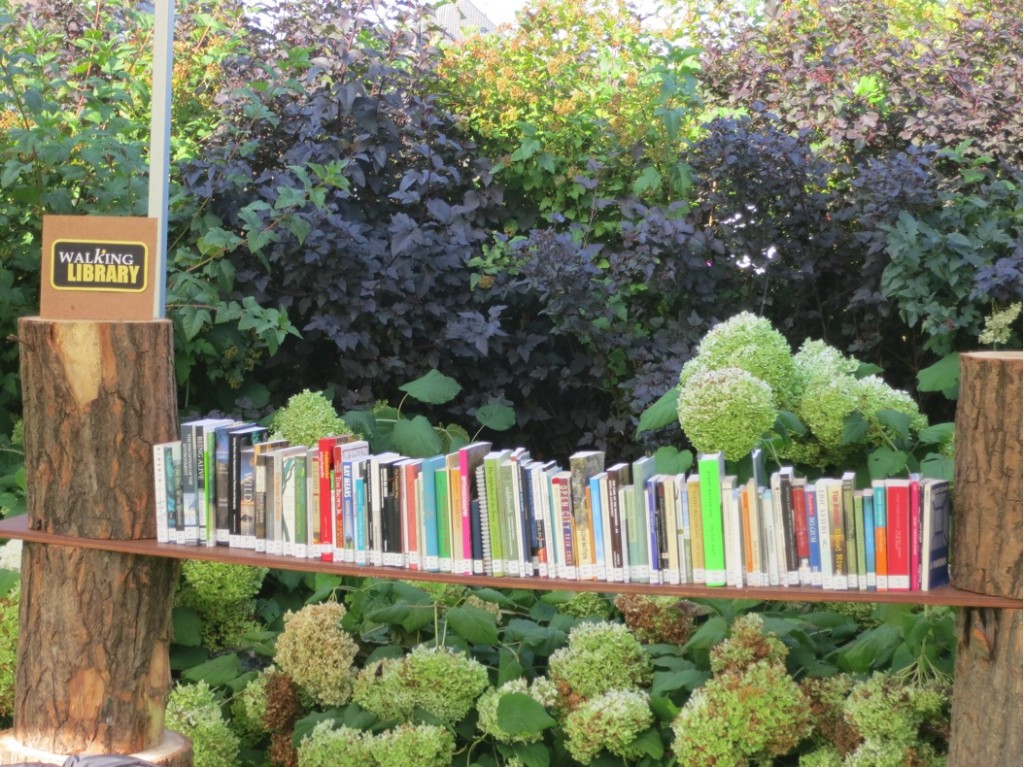 As with all good libraries, the Walking Library will facilitate a peripatetic reading
group as it journeys, allowing engagement with and reflection on the Walking
Library’s content, and maybe even some sketching with words or images – to be
gathered together into another for the blog, and into a small book for the Bothy.

For anyone not able to make the walk, we will be ending our journey with a tea
party, and invite you to join us in the Walled Garden, bringing a book with you.
A library is always more than a collection of books…

You can read Dee & Misha’s account of the day on their Walking Library blog here. 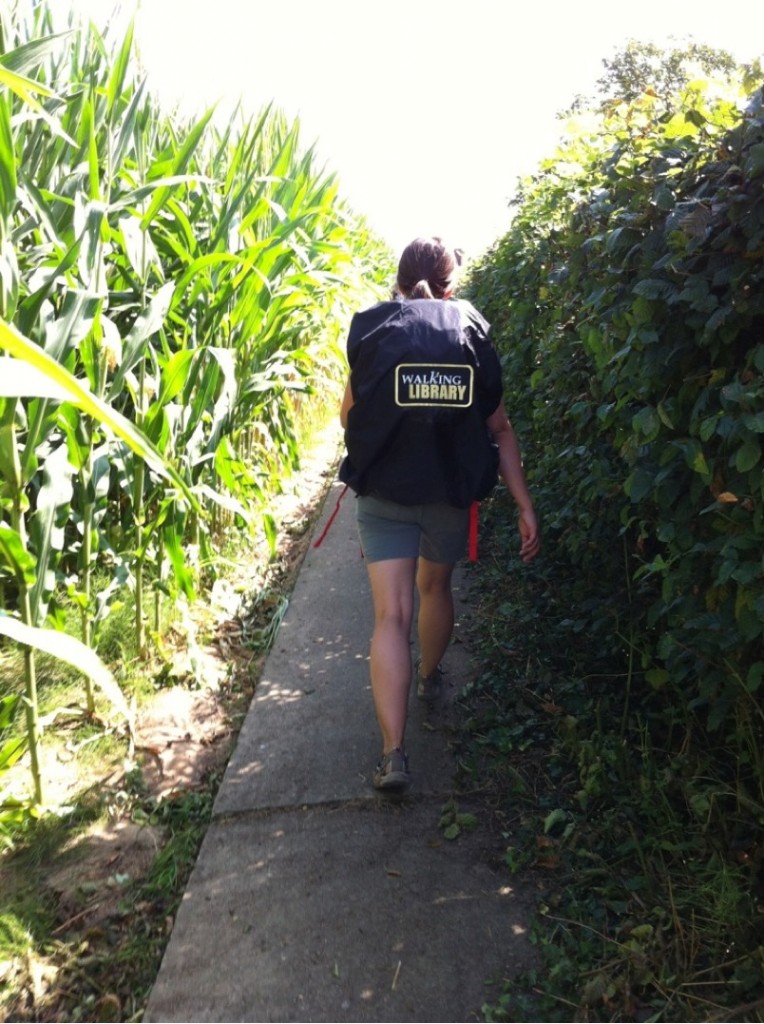 A Bookshelf for Sweeney’s Bothy

Sweeney Astray: A Version from the Irish – a version of the Irish poem Buile Shuibhne, Seamus Heaney (1983)

The Poems of Sweeny Peregrine: A Working of the Corrupt Irish Text, Trevor Joyce (1976)

Four Huts: Asian Writings on the Simple Life (‘Record of the Thatched Hall on Mount Lu,’ by the T’ang poet, Po Chu-i; ‘Record of the Pond Pavilion’ by Yoshishige no Yasutane; ‘Record of the Ten-Foot-Square-Hut’ by Kamo no Chomei; and ‘Record of the Hut of the Phantom’ by Matsuo Basho), translated by Burton Watson (1994)

Achilles in Vietnam: Combat Trauma and the Undoing of Character, Jonathan Shay (1995)

You can read Dee & Misha’s account of the day on their Walking Library blog here.