In July 2015, Glasgow based artists Nick Evans, Neil Bickerton and Torsten Lauschmann will be heading to Sweeney’s Bothy on the Isle of Eigg to research and develop ideas for their project ‘Plutonic Archipelago – The Voyage of the Solar Eye’. This week long residency is funded by Outset Scotland, a philanthropic organisation dedicated to the support of contemporary art.

The Plutonic archipelago (after the god of the underworld Pluto) is formed from the exposed magma chambers that make up the backbone of the Small Isles, the Rum and Skye Cuillin. These igneous intrusions are all that remain of giant volcanic boils and magmic cysts – remnant symptoms of geo-trauma – that reared up from beneath the earth’s mantle at the beginning of the paleogene around 65 million years ago.

The insular nature of the plutonic archipelago is both a symbolic and material link between the earth’s two oceans; the watery ocean of the diurnal surface and the seething mass of molten rock and iron of the nocturnal ocean beneath the earths crust.

These dual oceanic entities are the twin sisters of the sun, terrestrial manifestations of its immense energy, and progenitors of all life on earth, including the infinitely recent life form that is the human mind, replete with symbols and archetypes. A mind busily engaged in consuming its own civilisation on earth; its excretions a slow, man-made eruption of volcanic proportions.

The Voyage of the Solar Eye is a project that proposes to build a small boat and to undertake a strange cruise around the plutonic archipelago, focussing on such linkages between time, matter, consciousness and civilisation. 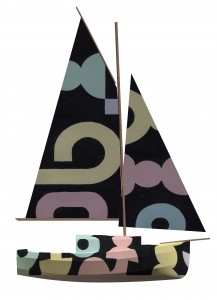 The strange cruise is an experimental investigation into the power of the object (the boat) as it relates to the geo-cosmos; the local or autonomous thing vis-a-vis it’s region or system. It will be an investigation into both the object and the system as encrypted artifacts of material history, rather than as the imaginings of the transcendent or subjective individual.

It is a search for sea and land-ways that draw parallels between geological time, natural history and human culture and thought. These parallel routeways take the form of an immersive investigation into the bearing on the human psyche of the oceanic inheritance of our genetic evolution, symptoms of the terrestrial inner nightmare; the iron core of the earth and it’s plutonic intrusions – the exposed magma chambers of the Rum and Skye Cuillin, and the conscious and unconscious symbols of the genetic memories of human thought.

In addition to producing an object (the boat) in which to undertake the strange cruise the project proposes to map its findings as a film.

Outset Scotland is committed to contemporary art at its most vibrant and ambitious. Driven by a vision to foster philanthropy in Scotland, Outset Scotland brings private funding from its patrons, partners and trustees to public museums and art projects, and is part of a global network Outset Contemporary Art Fund that has chapters in England, Germany, India, Israel, the Netherlands, Greece, and Estonia.  Outset Scotland patrons recognise the unique value of The Bothy Project and have formed a dedicated “Bothy Circle” to fund three residencies over the next three years.