The Bothy Project is delighted that Sweeney’s Bothy is located on the Isle of Eigg, where we work in partnership with Eigg Box; a social enterprise supported by the Isle of Eigg Heritage Trust. The island is the furthest leap that mad Sweeney made in his journey through the wilds of Ireland in the 7th Century, jumping across to Ailsa Craig and on, by further leaps, to the Scottish Gaeltacht.

The Isle of Eigg is a community-owned, renewably-powered island off the north-west coast of Scotland with a population of 110. Arising from the Land Reform campaigns of the nineties, the Isle of Eigg Heritage Trust was set up as the guardian of the Island, an umbrella body that sought to work through a partnership between the residents of Eigg, The Highland Council and the Scottish Wildlife Trust.

After years of instability, neglect, and lack of secure tenure, the Trust was able to purchase the island on 12th June 1997, largely due to the generosity of around 10,000 members of the general public. The Trust was established to create opportunity for economic development, housing, and infrastructure, whilst conserving the natural and cultural heritage to ensure that development takes place in a sustainable way. The Trust has been successful in these aims, with the Island now a vibrant and attractive place to live and work, with a growing and forward-thinking population with one eye on the past and one on the future, recognising the importance of Eigg’s unique identity to its continuing growth and success.
www.isleofeigg.net

Eigg Box is a social enterprise bringing together the island’s creative businesses with artists from around the world. Eigg Box will soon be based in a new eco-building sited near the pier as a cultural enterprise hub with artist studios, office spaces, and facilities for events, exhibitions, and training.
www.eiggbox.com 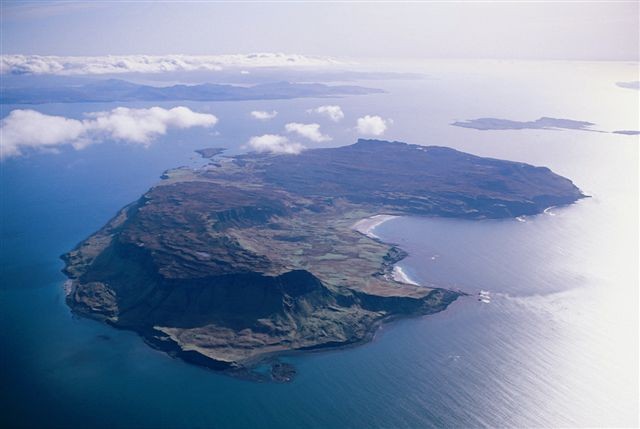 Sweeney (from the Gaelic ‘Shuibhne’) was a poet, warrior, and hermit; the poems that record his life offer us ways to think about this bothy. In his journey through the wilds of Ireland, Shuibhne leapt from Roscommon, Slieve and Slemish, across to Ailsa Craig and on, by further leaps, stotting through the Gaeltacht. Seamus Heaney’s translation, Sweeney Astray, has him sheltering for six weeks in a cave on Eigg; a brief residency, hosted by Donnan, who is still remembered in the name Kildonnan, who Camille Dressler’s ‘Eigg: The Story of an Island’ (1998), styles as a Pictish Saint, soul-friend to Colum-Cille.