the longest week/ let’s make plans to struggle for less work/ to really…/ be with the children/ look after them/ look at them/ listen to them/ write, read and talk together/ think about the way we use words with each other 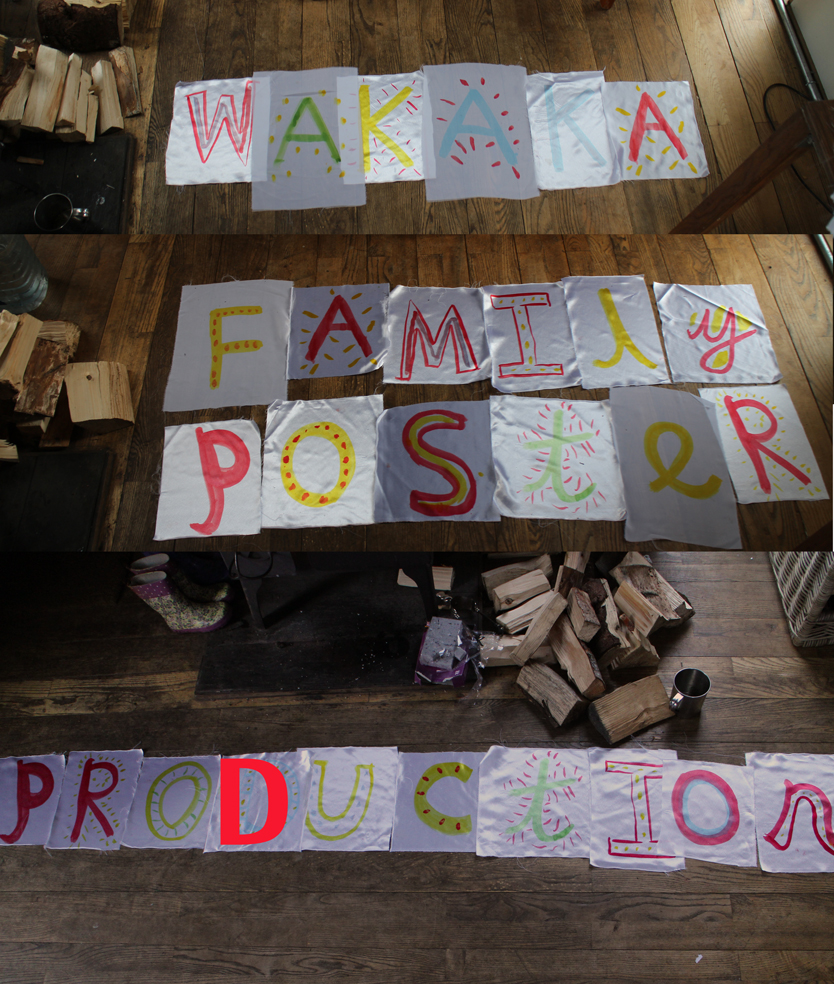 to make and think about new work

to come up with a feasible plan to work less

I often feel like I am unable to do any one aspect of my work really, really well, instead I am always divided and do two, three or four types of work to an ‘ok’ standard. Persistent thoughts of my mediocre achievements manifest in the dark hours of parental wakefulness and flash before my eyes in the most unexpected moments: waiting to cross the road whilst gripping two resistant wee hands, gazing into the dishwashing middle space, post teaching sitting on the bus, reading bedtime stories while remembering about what I have forgotten – the sarcastic little inner monologue chirps in well, you have done ok today.

I thought that the bothy would allow days of being a really, really good parent and then when the kids were tucked up in bed asleep after a day of playing, talking, hearty food, making work, baths in basins, and shitting outside, I could sit down in candlelight by the fire, and reflect, and think about being an artist. It was kind of like that.

So, what did we do and why was it important to make this week a bothy residency? Well, I guess, the only answer is that since having children, they have become part of my process of making work. As soon as Rudy was born (nearly 9 years ago) I realised that yes, I was still an artist, but the way that I made work would have to change. Since 2006 my work has explored and reflected upon my experience of being a parent, an artist, and a full time employee. We often use our domestic space in collaboration with other artists (as !!Project!WAKAKA!) and more recently my own work has incorporated an exploration of what I have come to call the in-between space. Although, our own immersion into our roles as parent artists has been fairly straightforward we have discovered that aspects of the art-world are less than convinced. We have really struggled to find residencies that accommodate collaborative groups, let alone collaborative groups that are families and, quite simply, the Bothy Project offered us the perfect hospitable opportunity. And now writing this, after a few weeks back into the everyday, I realise that our week in the bothy really was the longest week and I think we will feel the waves of benefit for sometime. Perhaps, most importantly (and somewhat embarrassingly) we realised that we could manage without all the ‘stuff’ that seems so essential on a day-to-day basis. This is what we did: 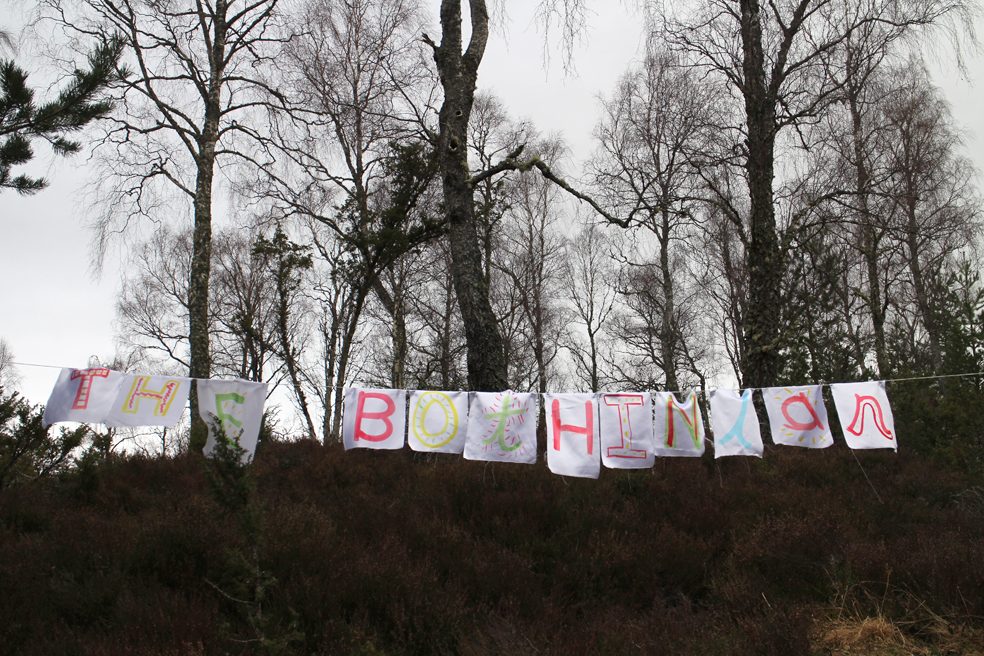 The bothinian is a semi-mythical creature/man/woman/child. Viable accounts exist that would suggest that the bothinian did once live. Folk tales passed down through generations tell of the bothinian and although the tales sometimes vary in specific content invariably the main narrative stays constant. The bothinians were a family of human/creatures known for their kind and gentle nature, a benevolent presence which contracted their somewhat alarming appearance. Green legs, bodies covered in letters (yes, letters similar to those who are familiar with the English language will recognise) and spikes down their backs. The bothinians also preferred to travel on giant chicken instead of the more common horse or mule….. (more soon) 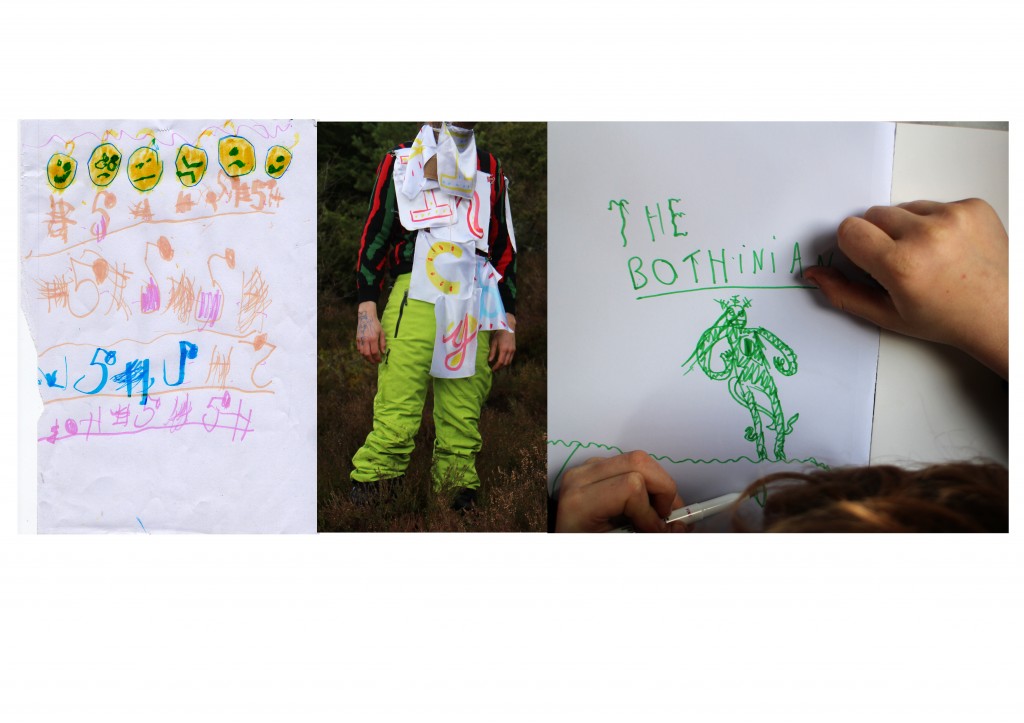 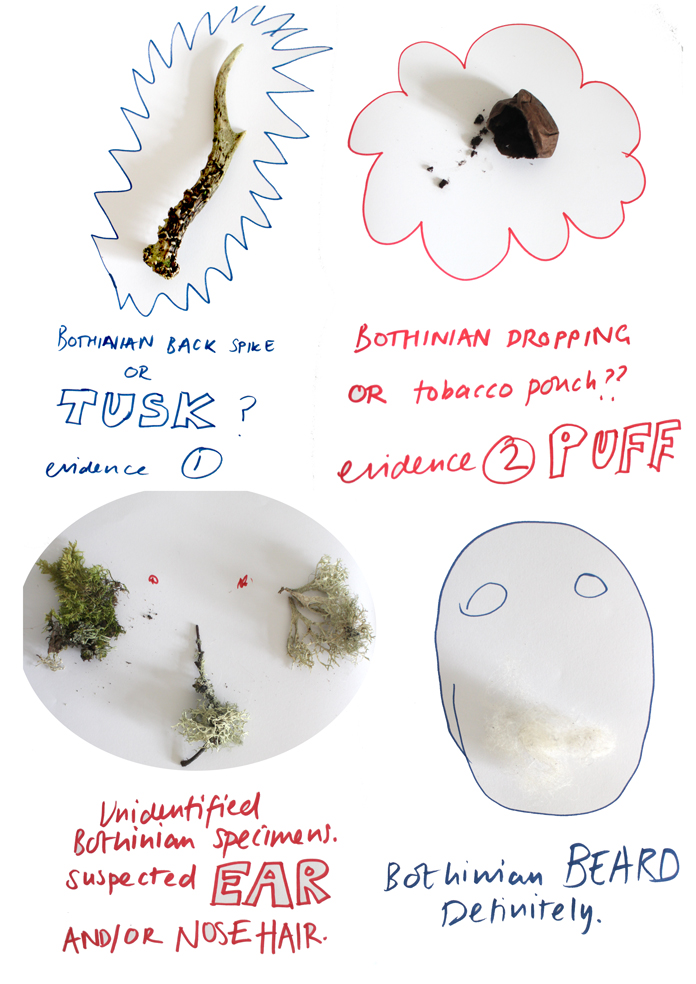 ABOVE: found evidence connected to the bothinians – signalling support for those who claim that not only once existed but they are still very much in existence.

ABOVE AND BELOW:  ESSENTIAL GUTTIES AND AMMO BAGS – hand sewn using only the finest materials – personalised on request 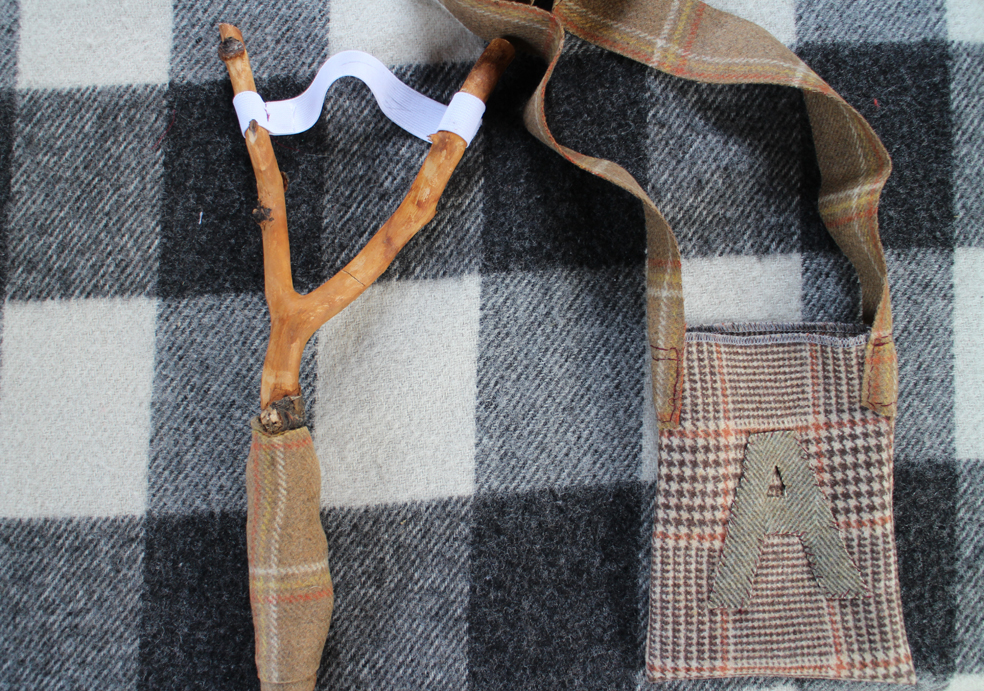 BELOW: Alice felt like she needed a doll to be with her in the bothy. So, she drew the doll that she wished for and called the doll Lizzie. I made Lizzie and Alice rejected her on the grounds that she ‘is creepy and itchy’ 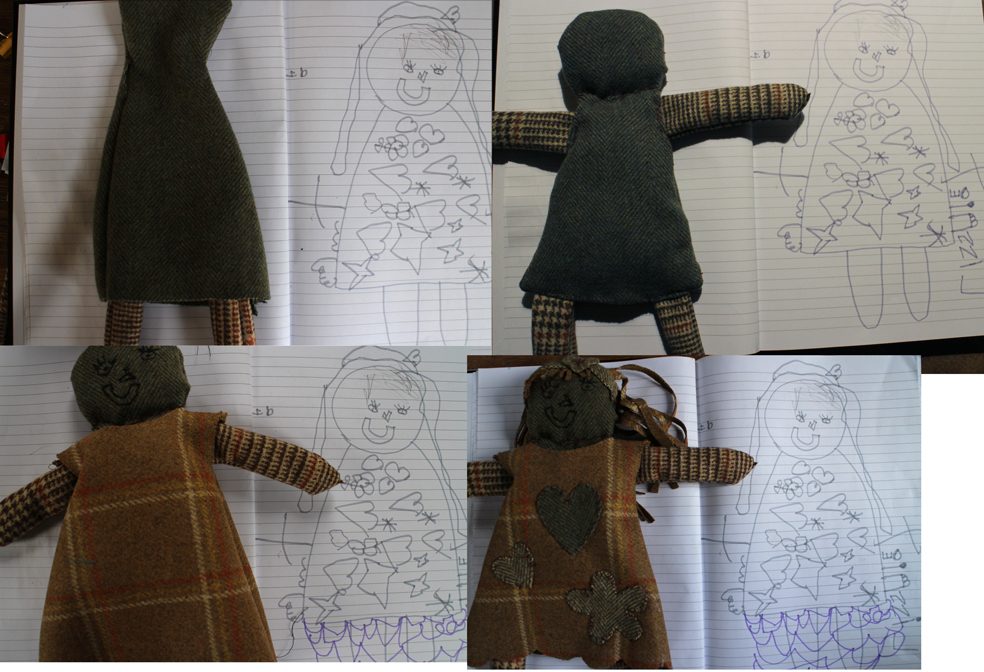 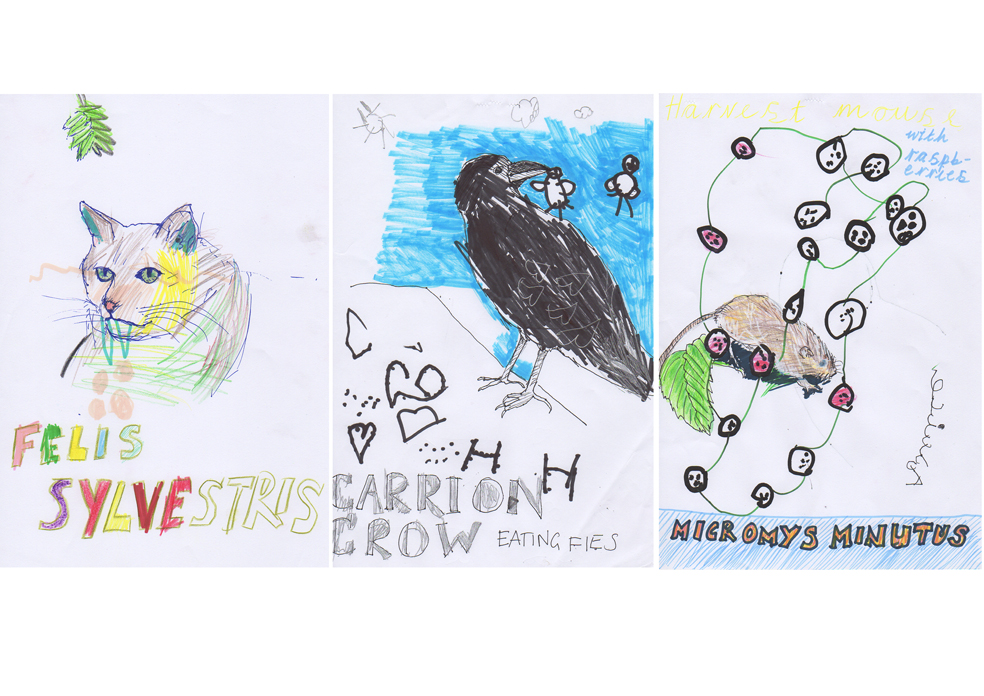 ABOVE AND BELOW: some animals and birds that we saw, hoped to see and some we knew we wouldn’t see but drew them anyway 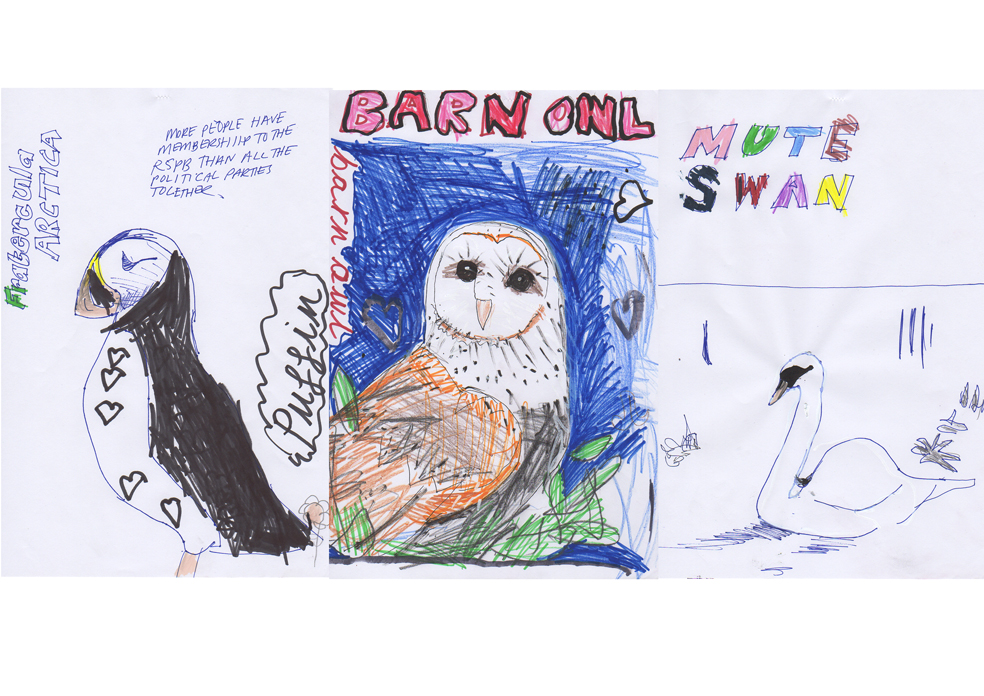