When writing about Eigg, the lure of words like ‘magical’, ‘dream-like’ and ‘fairytale-esque’ is difficult to resist.  By the end of my week there, my refrain became that I was sick of rainbows.  Sick of them!  Everywhere I looked I was confronted with another glorious technicolour arch: over my shoulder, out of the window, in the reflection of a teapot, in the bottom of my hiking boot.  If I reached into my pocket for a cigarette, I would probably pull out a rainbow.

The beauty of the island was relentless, and there is nothing as distracting as perfection when you’re trying to find inspiration for work.  Like most Grimm fairy tales, however, when I looked a bit closer I realised that there was something unsettling under the surface of the island’s postcard-beauty.  There is an eerie, unplaceable feeling that radiates from all ancient places, and I never felt it so acutely as I did on Eigg.

Eigg is a free range island, so you share the roads and paths with sheep and cows more often than with people.  Sheep are skittish and uneasy, and give you a wide berth, but the cows stand like thugs at the side of the road.  Sometimes I would hold my bag a bit closer when I passed.  Anthropomorphising is normal when you live in a city, and are removed from the realities of farming, and the often cruel, cyclical nature of the wild.  In my world, animals have first names and surnames, they have complex personalities and jobs, and, when they die peacefully surrounded by their loved ones, they are mourned.  Sometimes worshipped.

On one sunlit walk along the Singing Sands, I was confronted suddenly, due to a break in the low wall I was walking beside, with a dead sheep – eyes gone, but not yet decomposed.  Another time, on another walk along the cliffs, I found two more – only these casualties were much older, amounting to sad piles of greasy yellow wool, the living arrangement of their bones intact, like a set of school clothes carefully laid out for the next day.  I felt ashamed of my squeamishness.  A natural death on a hillside by the sea was a lovelier way to go than most living things could boast, but still I wondered – where would the service be held?  Did they leave husbands behind?

On another walk through the elevated pine forests in the middle of the island, the sight of a small group of red spotted toadstools lured me to edge of the trees.  The pure air in Eigg meant that the forest floor was bedded with an impossibly thick blanket of moss, that when walked on, felt as though you were walking on the fleshy belly of a sleeping giant.  As soon as you entered the trees, what little sound there had been on the path disappeared, and you were met with a silence that seemed to squeeze you.  All of a sudden I had the feeling that if I turned around to face the path again, I’d find that it had never been there in the first place.  This, combined with the ghost-like presence of ‘old man’s beard’, a lichen that clings to the branches of dead trees, makes it easy to feel as though the forest has a human presence – one that ought to be tiptoed past.

With this experience of the island in mind, it is easy to see why Eigg has such a rich mythical history.  One of the most prominent myths associated with Eigg is that of the big women – abnormally large female warriors who were said to have massacred St Donnan and his 52 monks on the island.  The big women were subsequently lured to their deaths by a mysterious light in the middle of a loch – known in Eigg as Loch Nam Ban Mora, Loch of the Big Women, or a better translation still, Loch of the Powerful Women.

I couldn’t read about this story without immediately calling to mind the women in the illustrations of R. Crumb: a curious juxtaposition between gross-out exploitation genre American comics and ancient Hebridean folklore.  R. Crumb’s depictions of women are invariably endowed with caricaturish large breasts and hips, but they’re also undeniably powerful.  Built with thick, muscular legs and broad shoulders, they tower over their male counterparts, warrior-like.  Whether dressed in tight clothing, or completely naked, they are confident, unabashed, and completely unapologetic.  This is how I liked to imagine these legends, and it excited me to think that these terrifying female spirits might have a malevolent presence on the peaks of the Sgurr.

Another captivating local myth was that of Sweeney, the bothy’s namesake.  I was thrilled by Seamus Heaney’s repulsive description of King Sweeney of Dal-Arie, cursed by the priest Ronan after a territorial dispute into the form of a hideous bird-like creature, and doomed to wander the wilderness until his death.

“His brain convulsed,
his mind split open.
Vertigo, hysteria, lurchings
and launchings came over him,
he staggered and flapped desperately,
he was revolted by the thought of known places
and dreamed strange migrations.”

To me, wrapped up in front of the fire with a thick piece of buttered toast, this visceral description of Sweeney’s doom seemed absurdly incongruous with the wonderfully warm and comfortable bothy.  I felt sad, and a little smug, while I imagined Sweeney in his grotesque bird form, crawling around trying to find watercress to eat.  (Why was he always eating watercress?  Eigg has so many mushrooms.) 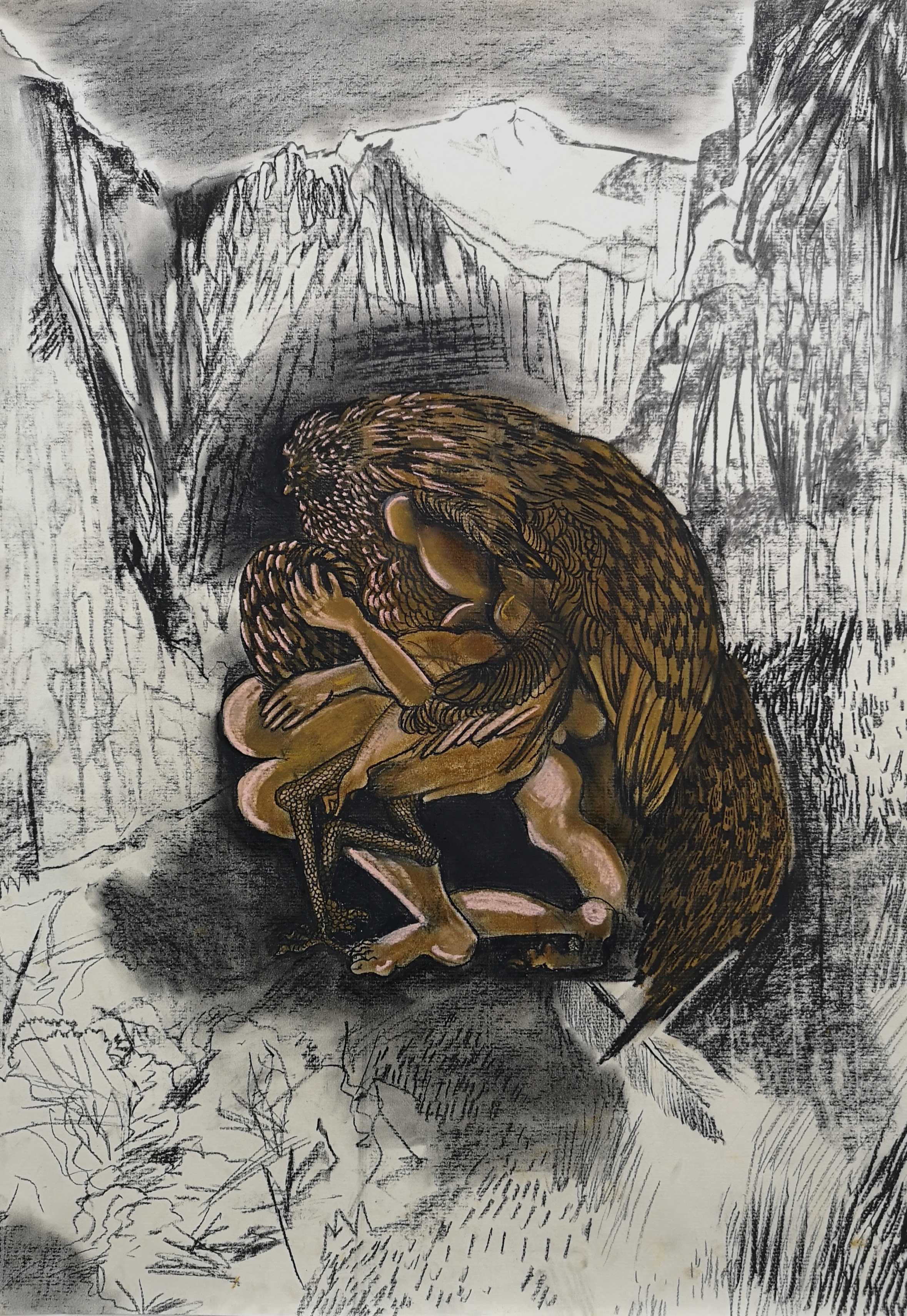 During my time on the island, I faced a constant internal struggle between my desire to see every inch of it in the short time I had there, and the sense of responsibility I felt to be suitably invigorated and inspired to create a singular body of work that represented my feelings about the place.  Before I went to Eigg, birds were just things you kept your chips away from, but on the island, I became obsessed with them – ornithology becoming the convenient changeling that kept me from trying to articulate my thoughts with charcoal.

In fact, it’s almost impossible not to become a birdwatcher on Eigg.  Each islander I encountered had a vaster knowledge of birds than everyone else I know combined, and I tried my best to assimilate.  My ears strained so hard to hear the distinctive cry of a Corncrake that I wouldn’t have been surprised if I’d had an aneurysm.  I also found it fascinating that the island’s birdwatcher in chief, John Chester (known on the island as ‘John Bird’), longed more than anything to see a magpie on the island – never in Eigg’s history had one been spotted there.  I liked this idea, that on an island which to me seemed so ethereal and otherworldly, a single magpie would be magical.

In the end, exploring the Island won out over the work.  I came away from Eigg feeling bloated with beauty and folklore, and I set about thinking how I would turn it into a series of pictures.  With the exhibition planned for August 2019, the work exists now in sketches and ideas, but my experience of Eigg left me with a heightened awareness of how we engage with our surroundings and our history through myths and legends.  My work for RSA New Contemporaries 2019 took inspiration from the story of Bacchus and Ariadne, and an exhibition I’m working on for Arusha Gallery in September 2019 takes its inspiration from Brewer’s Phrase and Fable, a dictionary of out of fashion and antiquated words and phrases that have unfortunately fallen out of favour.  Attempting to align a story we tell ourselves to explain where we come from with an image is tricky, and sometimes seems depressingly futile.  To simply illustrate a story like the big women of Eigg, or the transformation of Sweeney would pale in comparison to the rich image of them I had formed in my head, but I can’t help but feel compelled to.  Revisiting these stories again and again, and rendering them in different guises feeds into the ever changing nature of folklore and legends, not diminishing them, but making them stronger, and more real.