Island of the Big Women.  It started with a painting in the garden office of the woman I admire the most. Each time I visit her, a rainbow-lit candle glows from above her desk and flickers at the edge of vision. It is impossible to ignore the vitality, the hope, the almost musical use of colour in the painting.

‘Candle, Eigg’ by Winifred Nicholson (1893–1981) was painted in 1980 during a stay on the island with the artist’s great friend, poet Kathleen Raine (1908–2003).   The two women rented what was then known as Gamekeeper’s Cottage (immortalised by another of Nicholson’s paintings, ‘Gateway to the Isles’).

Raine was a poet infused with guilt and sorrow, her love for Gavin Maxwell (author of Ring of Bright Water, a line from Raine’s poem ‘The Marriage of Psyche’) unreciprocated and their friendship suffering irreparably after the death of Maxwell’s beloved otter, Mijbil, whilst Raine was looking after him.   Both she and Nicholson had visited and worked at Maxwell’s home on Sandaig, near Skye.  Carrying these two creative greats in my mind as I traveled to Eigg myself, I was determined to be inspired by the places they had seen, to visit where they’d stayed and to pay homage.  I had no idea that the island was about to introduce me to its latest embodiment of ‘big women’.

By the way of the sun
By the dazzle of light
By the path across the sea
Bring my lover.
– Kathleen Raine

Here, take these bluebells,
campion, willow-herb,
vetch gathered out walking
on the boggy moors this morning
not thinking of him sleeping
remotely across the Sound of Sleat.

Take them, please, away from me
before I desecrate them petal by petal.
Arrange them in a jar,
a modest vase perhaps,
set them on the windowsill and paint
them in your unseen colours.

I’ll build us a peat and driftwood
fire as you work, boil pailfuls
of well water for tea, nettle soup.
Later, I’ll scramble down to the bay,
collect mussels, cockles and razorfish
in my apron pockets – not stopping

to gaze at his bright ringed water.
No. Sometimes I dream
he’s a raven come to seek me. I
wake wanting him in my arms, my bed
empty, nothing to hold but a dark
slick feather resting on my pillowslip. 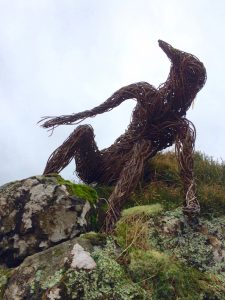 I had been worried about the effects of isolation on my mind; about my ability to manage entirely alone; about what I would do if there was an emergency at home. Researching Sweeney and his madness during my stay became a permission–giving exercise; a slow realisation that for all its elemental wildness – and no matter how violently Storm Gertrude kicked off and tried to cart wheel the bothy into the sea – Eigg is a place of warmth, of healing and containment.

Up there among half-lit, half-
mapped crags, you might catch him
ankle-snagged between two
rocks. And if you don’t catch him,
you might catch sight of him –
his fleeting back: its pelt of willowy rods
twisted inward, packed downward
into spindles of ribs seasoned
from green to rust long before
his downy buds could erupt.

He squats on the cusp of movement,
eyes high over cairn, cist and cliff,
one withy arm outstretched
as if to lob a shot or call down
his gods from their beak-battered
shells. Days when there is no sighting
him, you might catch the sense
of a bird or a mind in flight;
a mind unsoothed by silence;
a mind rattled by its own animal

sounds: weeping, breathing, eating;
the rush of flames in the grate;
a demented bellowing wind.
Like Sweeney, I have wandered
these seven years, flitting
from island to island state, uncloaked,
naked, protected by precious little
but this patchy birdwork mask –
its single unpluckable feather fletched
to the back of my draggled head.

The bothy has a way of impressing itself upon you to let you know first what it is that you need, and second how to give it to you. I had been certain I only needed space and time to write uninterrupted by the noise and mess and mayhem of family life. I wrote a negligible amount during my residency and worried about this constantly. I walked, chopped, daydreamed, combed, wept and baked – all of these interspersed with long stretches of just looking, staring through the window at the view of Rùm in quadriptych.

I am Sweeney, the whinger,
the scuttler in the valley.
– Seamus Heaney

a view of Rùm in quadriptych.
Kneel before the hamper on the floor
stuffed with fire-lights, sooty gloves,

the torn up box of a long-gone year
of whiskey. Feed the ravenous stove &
cherish the splutter of the plump

orange kettle on its top. Nap in the nook,
the book-lined nook as modern-day cist
or cairn or cave. Work at the desk,

antique binoculars at hand, lamp bent
away from the page & the gentle scent
of lavender sprigs in a butterfly-printed

vase.  Evenings, with your face to the sinking
sun, sit on the bench hammered
from abandoned sleepers.  At night

take flight to the mattress in the rafters,
a stripped young birch nailed as a rail
to keep you in… or to keep what’s troublesome

out. Let it hold you curled safe as Sweeney
up his tree. Eye the island in all its darkness
as it reduces to nothing but this black cube:

the wind, the hail, the crackle of the fire dying,
your occasional sighs like ashes settling
into themselves.  Take in all this

and be no closer to knowing if it’s a lunacy
that drew you to this place or if you wandered
here to set your madness free.

Afternoons, as the light shifted across the Atlantic before guttering out completely, I’d curl up in the book-lined nook for a mug of fennel tea, a nap, then a chapter of Camille Dressler’s Eigg: The Story of an Island, which has informed many of the poems I’ve since written, and is also where I first read a translation of the island’s original name, Eilean nam Ban Mora, as ‘Island of the Big Women’, the name I have subsequently given to the pamphlet of 25 poems I have written in response to my week on Eigg. 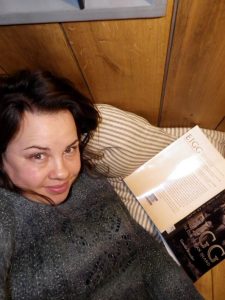 [1] from Winifred Nicholson in Scotland by Alice Strang, 2003.