The John Watson Prize is awarded annually to a graduate of Edinburgh College of Art (ECA) by the John Watson Club in association with the Scottish National Gallery of Modern Art. The building which now houses the Gallery of Modern Art (One) was, until 1975, the John Watson School. The prize has been in existence since 1991 and previous winners have included artists Stephanie Mann, Paul Chiappe and Jonathan Owen. The winner receives a medal and the opportunity to display their work within the gallery.

The 2014 winner is Nathan Anthony (b.1991) who graduated with a Fine Art MA (Hons), from the Sculpture department at ECA earlier this year. He is currently based between Edinburgh and Brussels. Anthony was selected for his witty conceptual works that explore our understanding of the nature of materials and their associations. On display here are a selection of works by Anthony which exemplify his varied approach and interests.

Of his work the artist has said:

‘Whilst I often embark on the making of a work with a loosely formulated outcome or end goal in mind, I frequently find the result to be drastically different and unexpected. Its trajectory often becomes dictated by serendipitous discoveries that I have made en route, that could not have been preconceived, but are visible only as a result of the making process.’

The artist would like to thank the MOONENS Foundation, who supported and enabled the preparation of this exhibition by providing free access to one of their studio spaces in Brussels, Belgium. 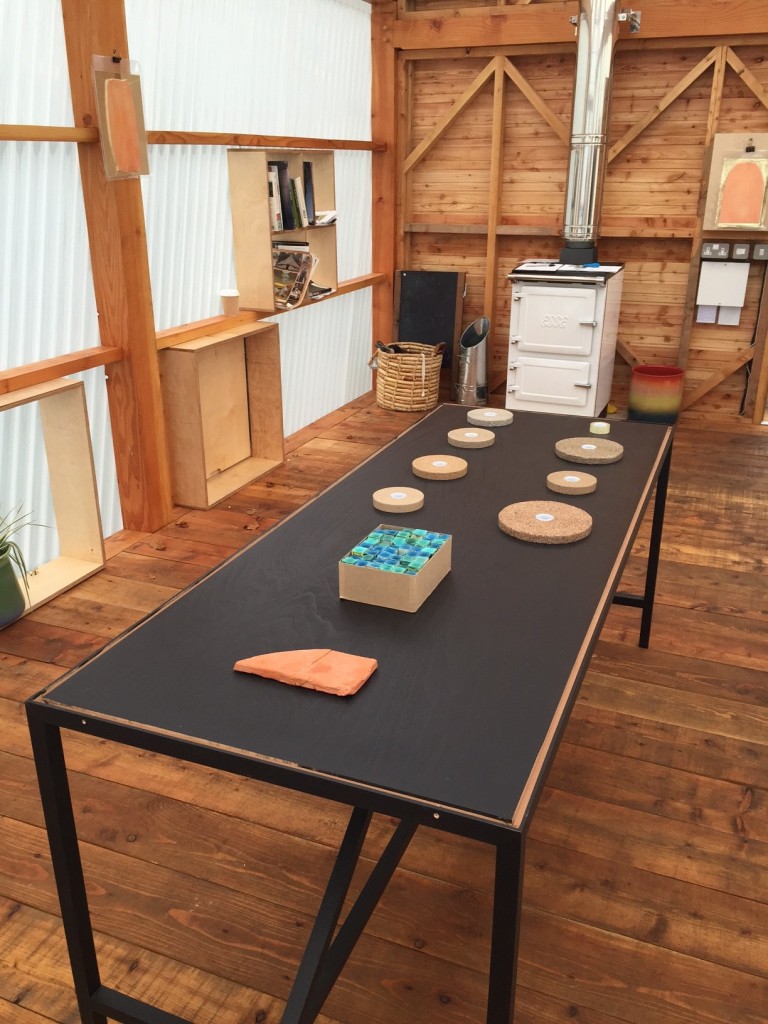 The texture and hue of sand from different beaches is recorded by completely unraveling and rewinding a 25m roll of cellotape, sticky-side down along a beach’s surface, to capture all the grains in its path. The examples here are selected from the result of a two week walk by the artist, from Stonehaven to Inverness, during which 48 sites were sampled. The title of the work comes from the name given to a collector of sand – an arenophile.

Another ongoing work in which unused pool or snooker chalks (which the artist always has in his possession) are swapped for heavily abraded ones, in establishments where one is able to ‘graze on the baize’. On show is the complete current collection, taken from a variety of locations across Edinburgh and London

A small fragment of a much larger work, in which tennis balls were shot at wet clay tiles to make scuff marks and small craters. The resulting clay shapes were then fired in a kiln. 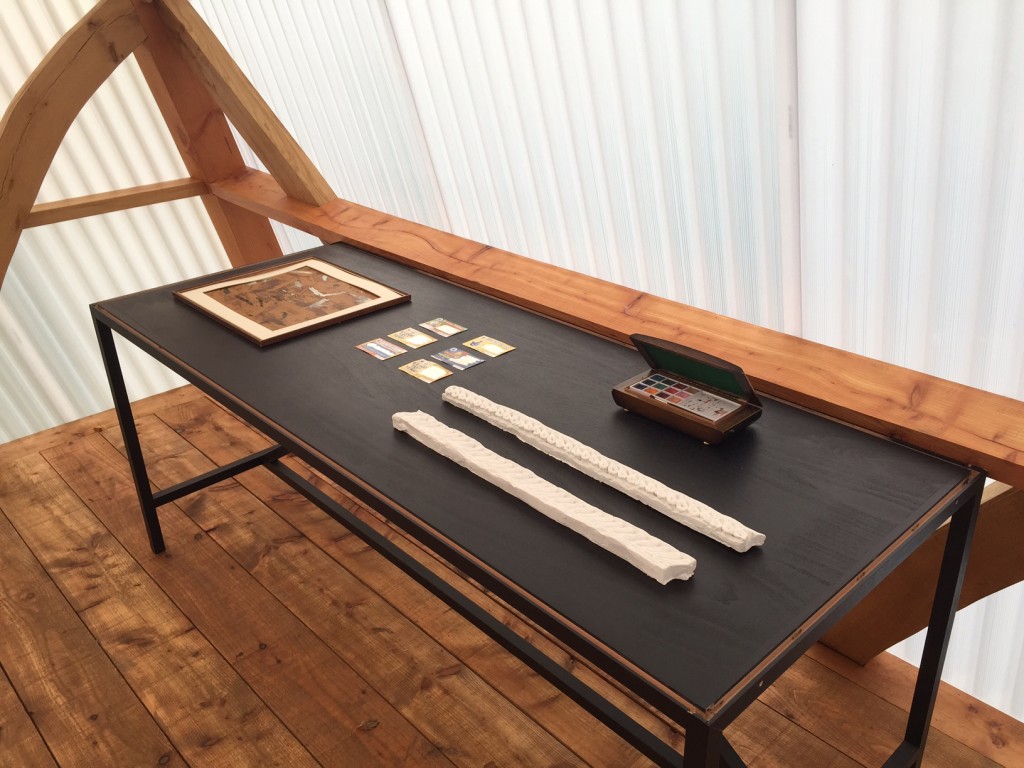 Bought prints of paintings with image obscured by screen print

Connected to the scratchcard works, prints of paintings purchased in various charity shops were screen printed over with an image of OSB wood in a specially prepared removable ink.

Silver leaf is applied to portions of shop bought scratchcards where the ink has been scraped away; obscuring the view of the potential results, and highlighting the previous removed foil.

A visual pun – similar to the Not Oak Smoked work – the form of this work connects the fluid, frilly, faux-sophisticated appearance of a Walls Viennetta with decorative architectural embellishments like cornicing and friezes. Transformed through the casting process, the two different frieze styles come from either side of the Viennetta. 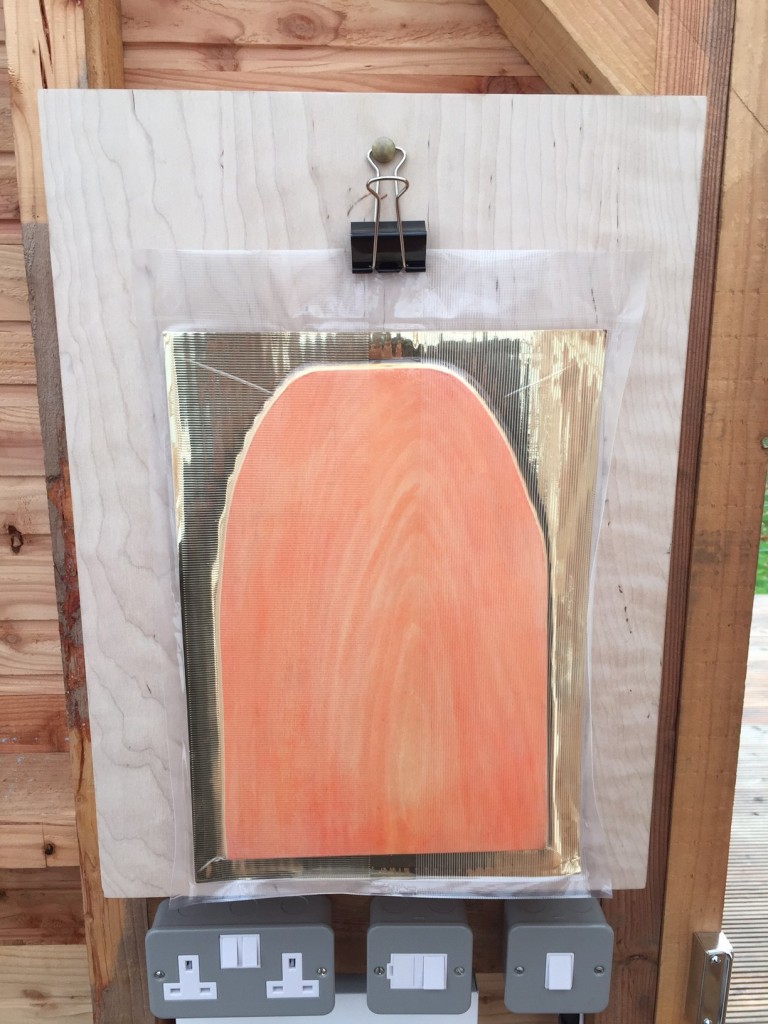