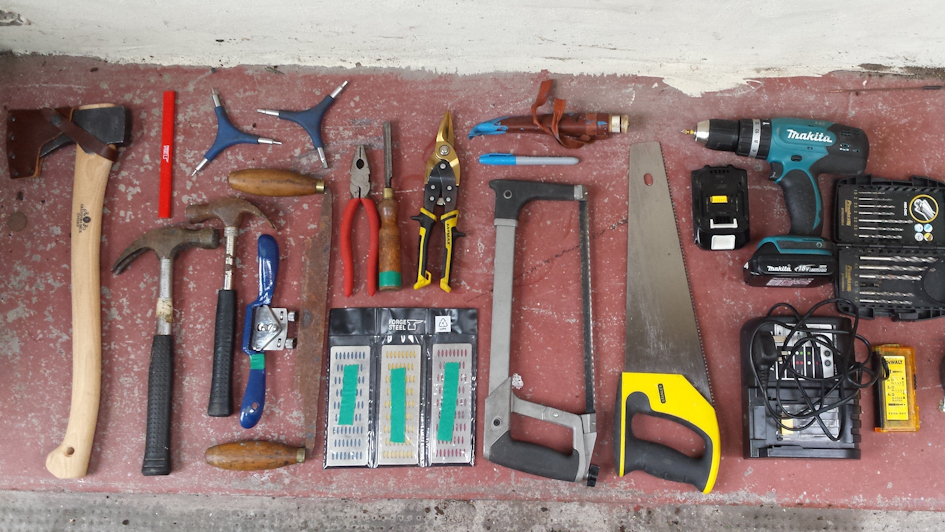 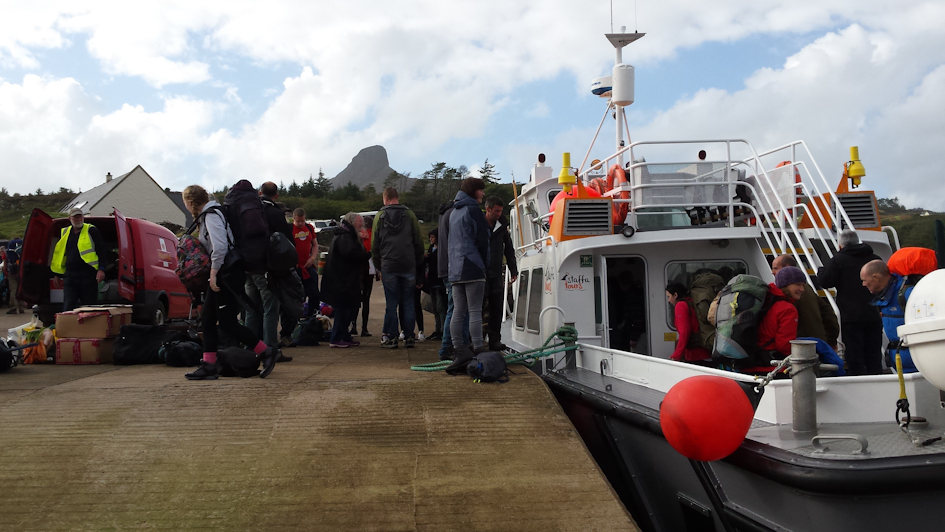 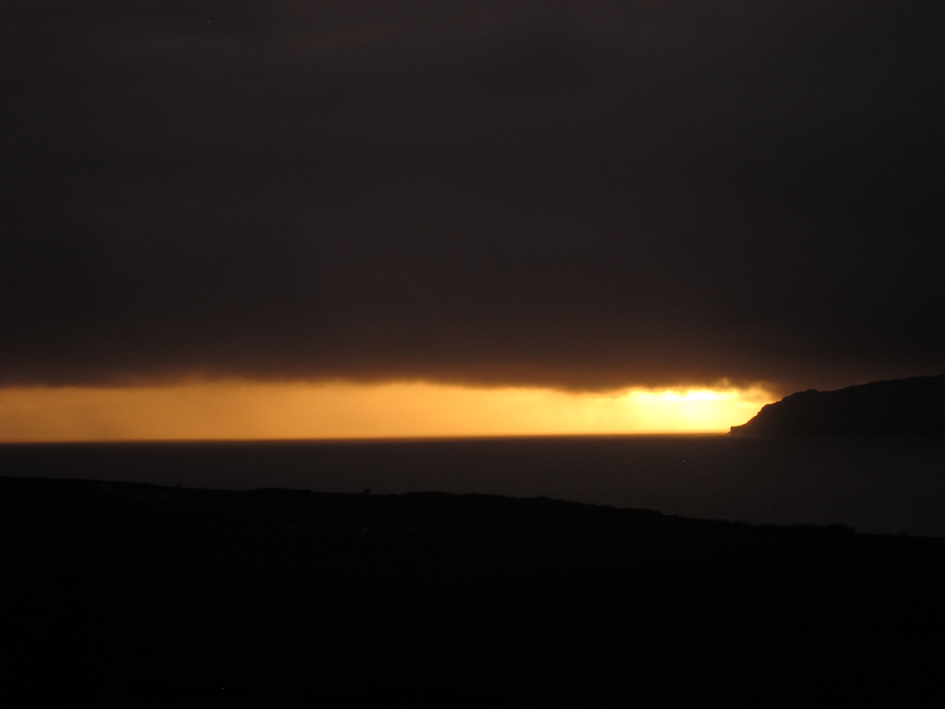 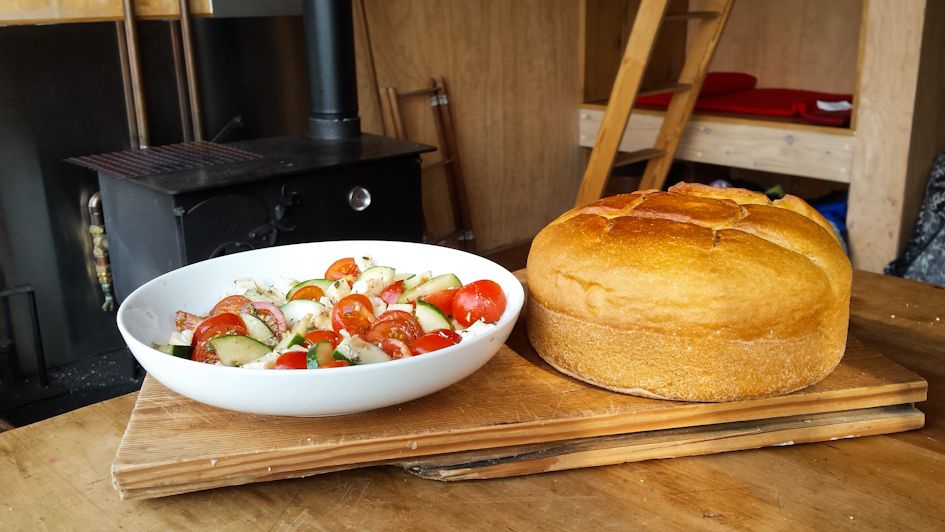 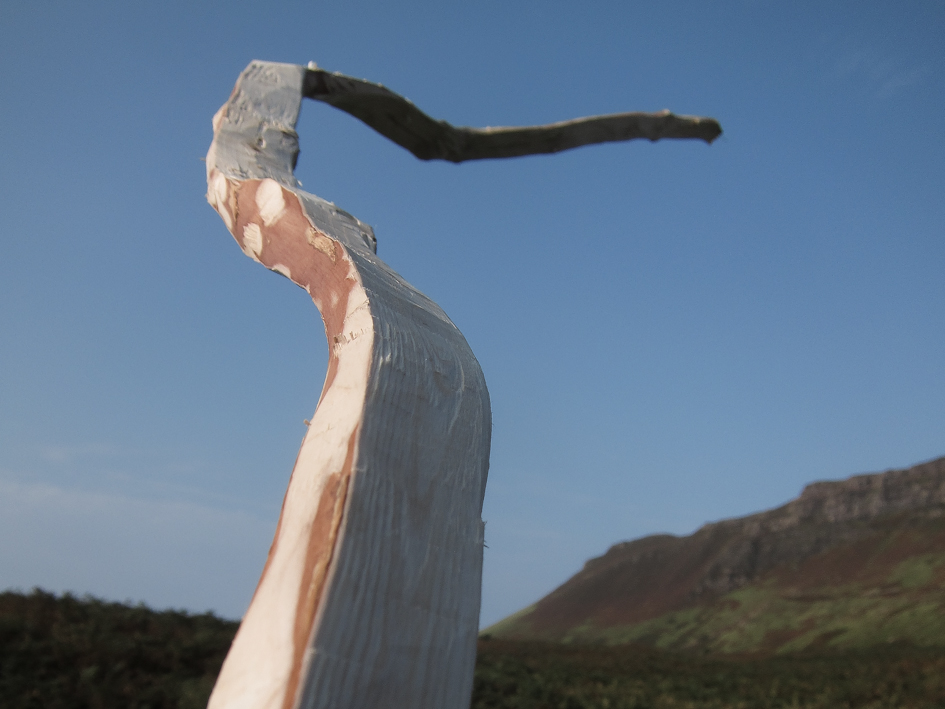 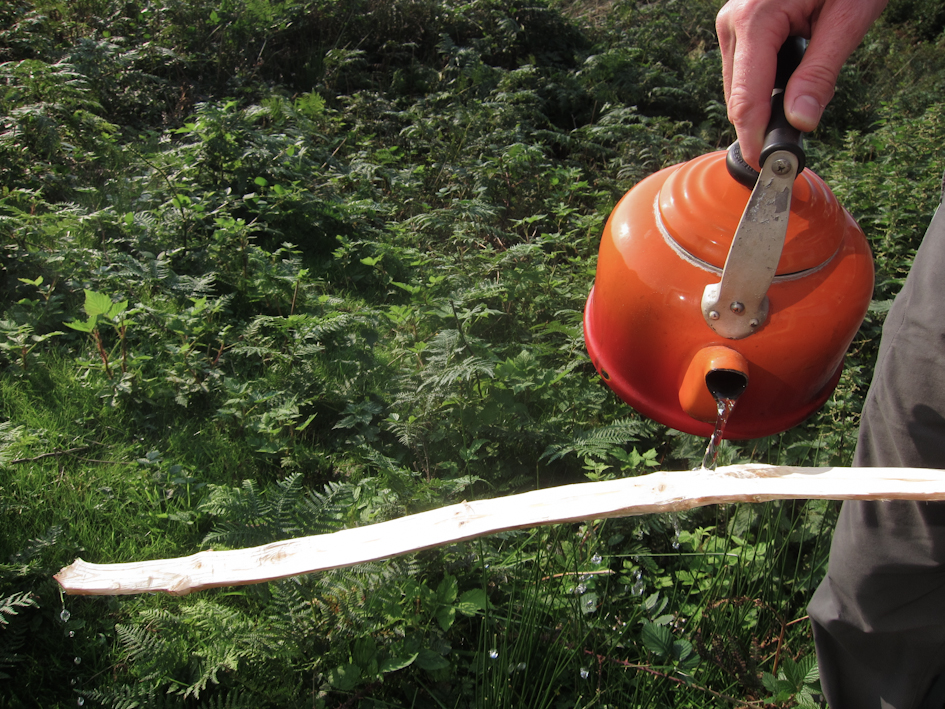 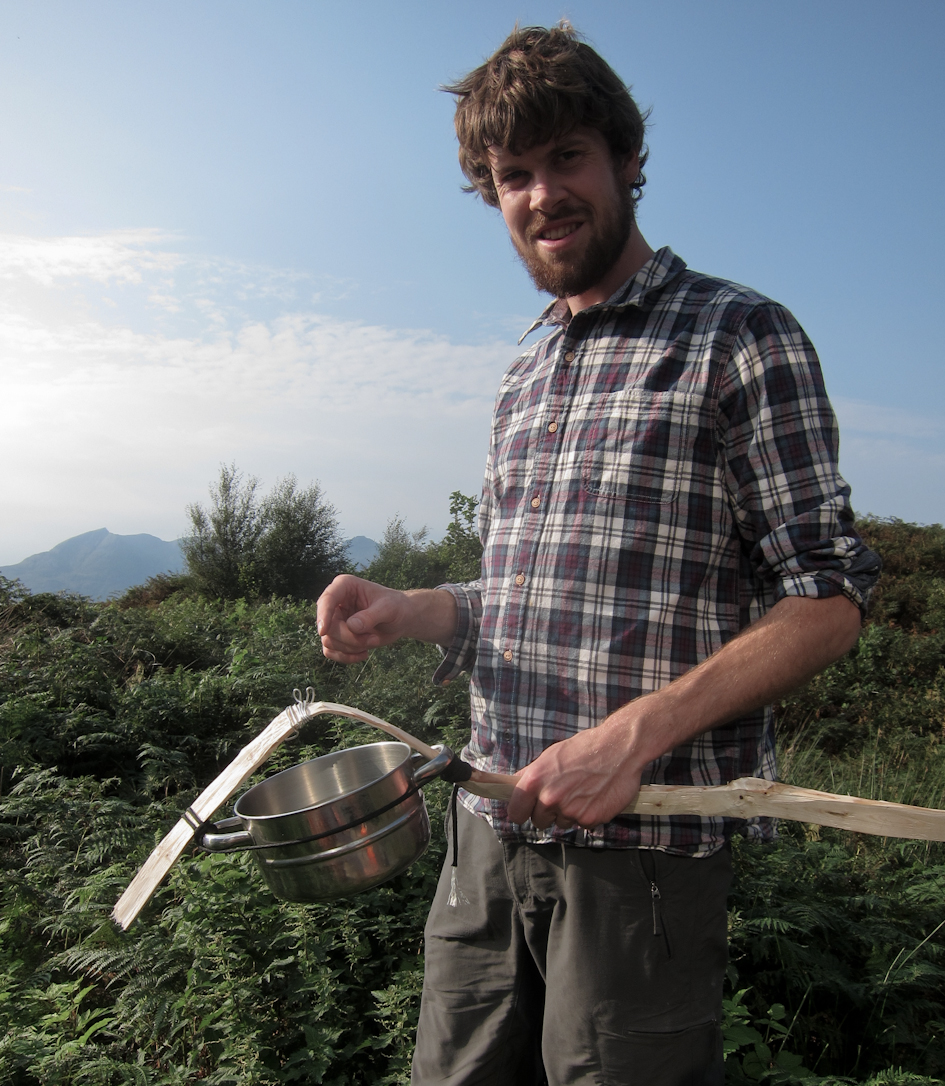 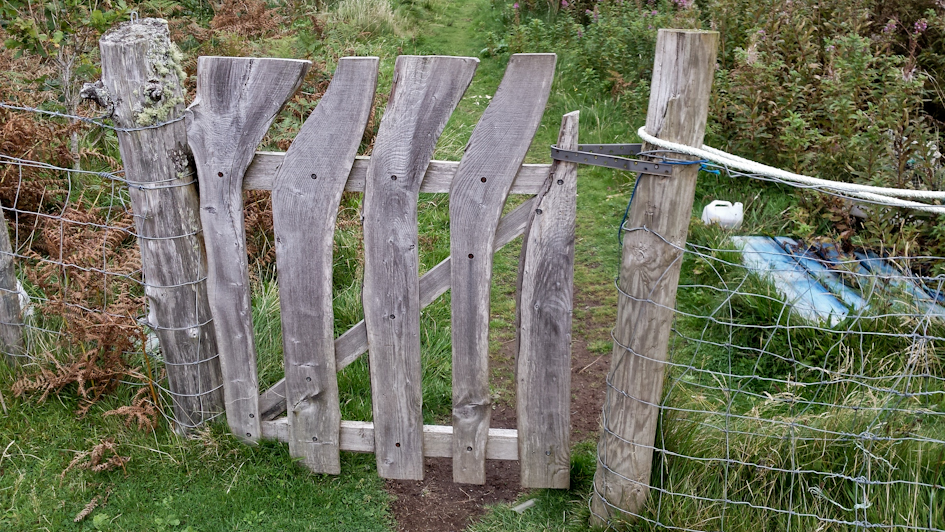 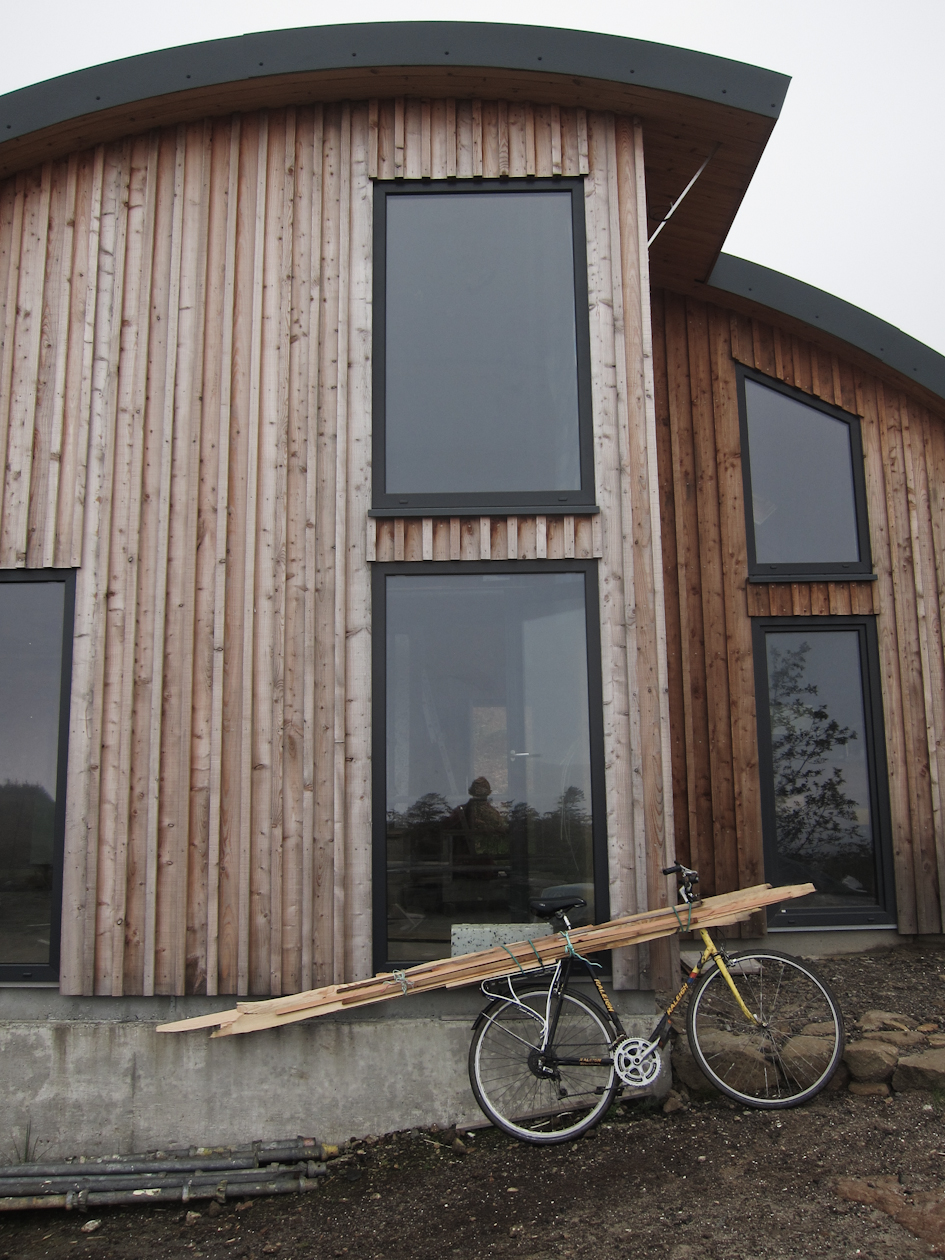 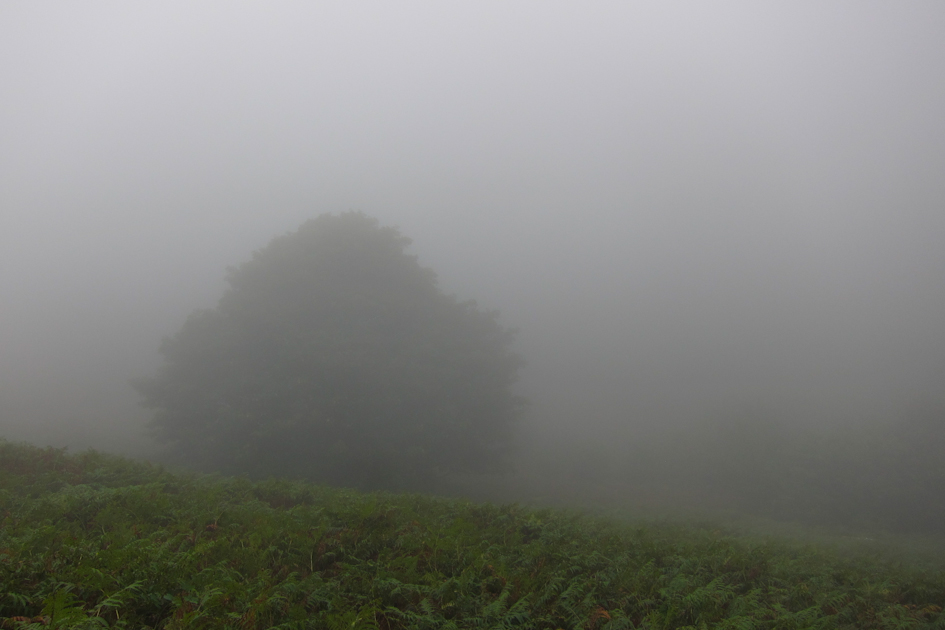 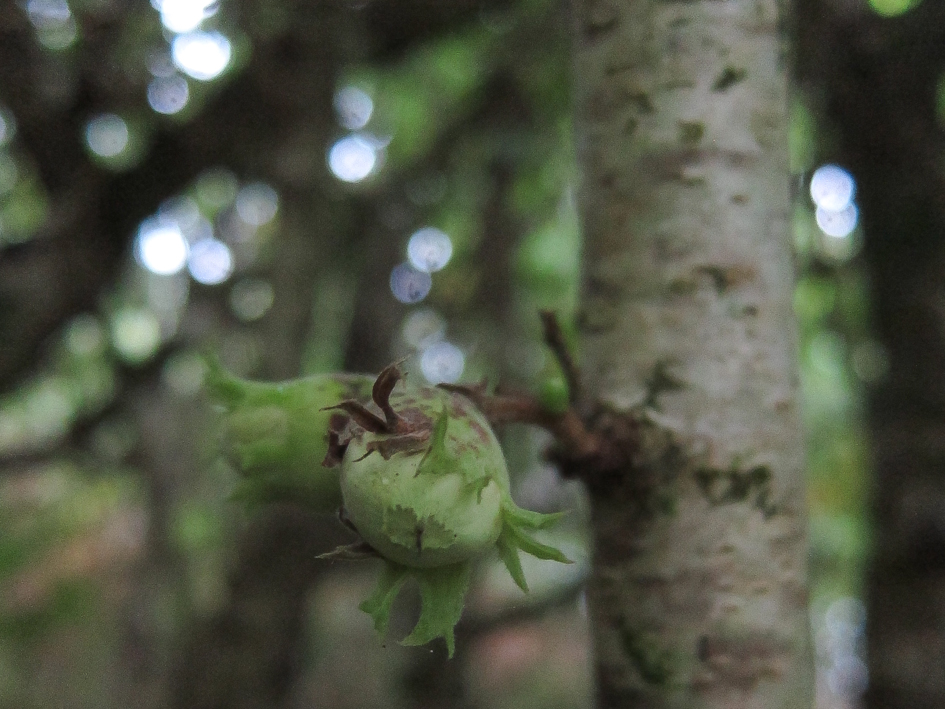 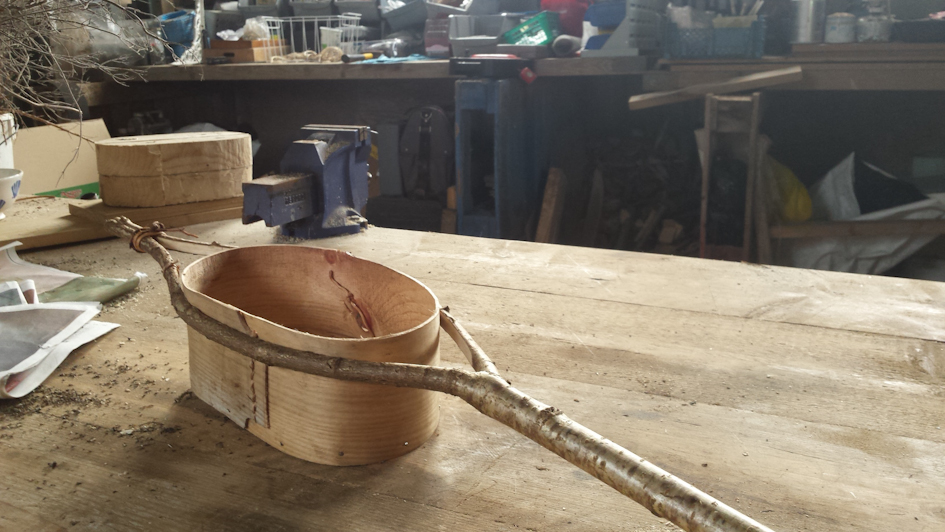 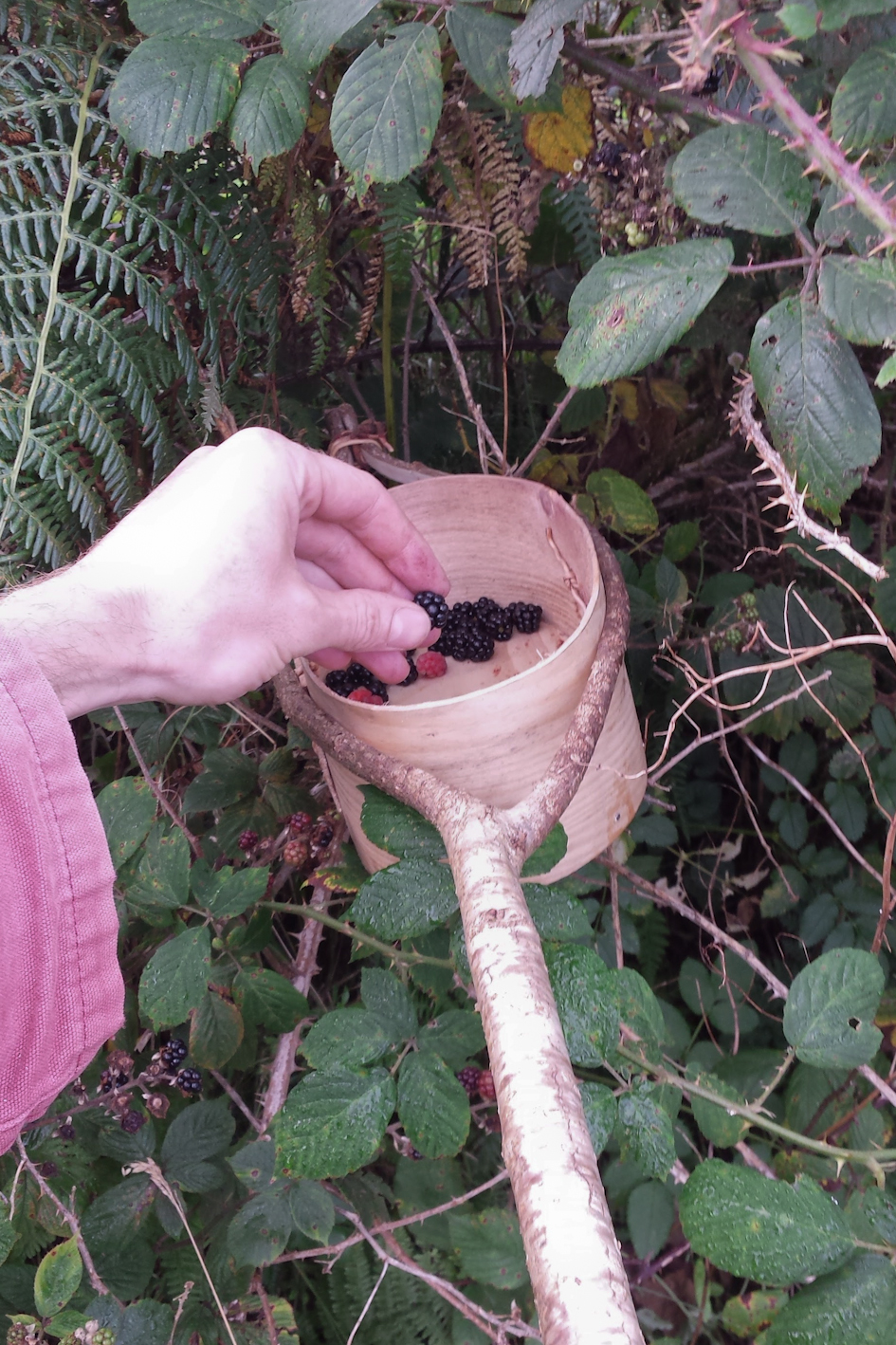 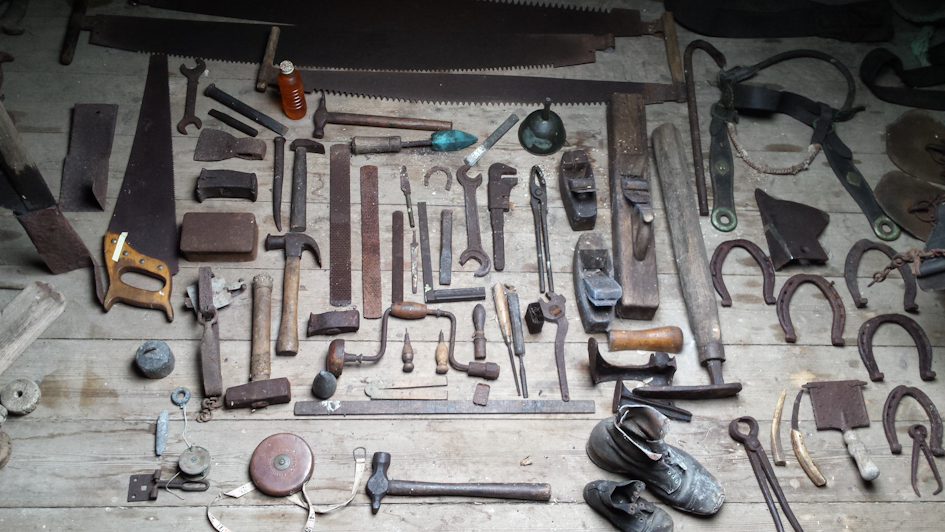 I suspected that spending a week in Sweeney’s Bothy on Eigg was going to give me fresh insight into my practice as a designer, and after returning I knew that my suspicions had been well founded – but like all creativity those inklings are not easy to translate into words. By the end of this blog I hope to explain something of my thoughts regarding the matter, as well as relating my escapades on that remarkable island.

I spent the week there from the 10th to 17th September, on an Inches and Carr funded residency for the new Bothy Stores project, with the mission of designing a product for bothy living. I was also accompanied by my partner Jess, who, being an artist, had undisclosed reasons of her own for being there. Apart from those parameters there would be the refreshing absence of the humdrum world crammed full of telecommunications, schedules, bustle, or endless opportunities to be a good consumer.

Much of creativity has a wild untameable element which can fill you with trepidation, and the weather leading up to the crossing to Eigg seemed to affirm that feeling. The ferries had been cancelled all day before we were due to travel, were due to be cancelled the day after that, and in the event only just ran as far as Eigg and Muck, with the sea being too rough to reach Rum and Canna. With a replacement boat service run by Staffa tours (due to the main boat being in dry dock), the crossing was exciting to say the least, a rollercoaster ride of steep short waves, crashing spray and looming scudding rain showers in a packed little boat of 50 people. The crew were completely unfazed and as a result the passengers were bedraggled but grinning. The Sgurr of Eigg hove into view and we had arrived.

The pier-head was crowded with the great and good of Eigg: ferry-time is the social highlight of the day in Eigg, and it’s the time and place to get the craic, nab the best shop produce that’s just come in, or make plans. We were met by Eddie Scott with his distinctive green landrover and laconic style, and given a lift to Sweeney’s Bothy on his croft. Lucy was away in Canada that whole week so sadly we did not get to meet her.

The first two days were full of gales and rain and it was the perfect time to hunker down in the bothy and drink in the surroundings. White capped waves and Rum putting on and off its coat of cloud as the showers barrelled in.

The chattering mind does not want to let go of purpose. What am I doing here? What is my goal, my schedule? Surely I need to treck up to the school and answer all those emails that must have come in! But the bothy has everything you might need in exactly the right place and there is no reason to go out in the rain.

Who was Sweeney, and how did he end up in Eigg? I am captured by the story of Sweeney, it resonates with the place and with the state of the bothy traveller. We listen to a recording of Irish singer Liam O’Flynn through the ingenious ceramic horn amplifier, and wonder about a song in which the narrator curses Sweeney at his fireside, content with his lot of trying to plough the barren rocks of Bawn. “Don’t hire with any master till you know what your work will be”. What if, as a designer, you don’t have any master and you don’t know what your work will be until it is made?

On the third day the weather cleared and we went on a cycle trip to the shop – unluckily Jess came off her bike and bashed her leg, leaving her house-bound for the rest of the week and unable to explore the island like we had hoped. Things are never what you expect – and an entertaining lift with Eddie to the doctors for a check-up, enforced contemplation and an ambitious hobbling trip we undertook most of the way up the Sgurr at the end of the week had their own merits and challenges! Meanwhile I was left to pursue the plan of designing and building a product for bothy living – or developing a toolkit or philosophy of the Bothy Hacker.

I see bothy culture as an expression of innate human resourcefulness. We are a tool-using species, and the desire to make a home wherever we land up sparks our creativity and natural cleverness. There is a joy in possessing only basic tools yet being able to make all that you need in the moment: carving a wooden spoon at the fireside with only with a knife is more fulfilling than bringing a titanium spoon bought on Amazon. So before I left I packed a bag with a basic woodworking and metalworking toolkit and lugged it with me, along with bike, clothing and supplies.

Designing a product for bothy living is not a straightforward design challenge; the bothy dweller has come to the bothy in order to escape the world of overwhelming consumer convenience – to ‘reconnect to nature’ and live the simple life. Apart from anything, Sweeney’s bothy has been so well designed that there is nothing more to add or take away (apart from perhaps a shower screen to stop the wind blowing the hot water sideways!). A magazine article in Sweeney’s library suggested the following life philosophy: “Perhaps the wisest thing we could do is to make peace with purposelessness”. But that very Zen approach seems to go against the restless curiosity of the creative bothy dweller.

That was what led me to propose a Bothy Hack approach. ‘Hacker culture’ stems from the pioneering days of computer science in the Massachusetts Institute of Technology, when a ‘hack’ was defined as a “project undertaken or product built not solely to fulfil some constructive goal, but with some wild pleasure taken in mere involvement” (Steven Levy, Hackers, p.23). A programming ‘hacker’ will carry on experimenting with new code right through the night, purely because the work is so fascinating, joyous and fulfilling. It is also a very sociable activity. The best design work stems from the same approach.

I entered into the spirit of the unknown, exploring the singing sands with their collection of welly boots and other flotsam, and experimented with carving a storm-blown branch, following the grain with my shiny new axe. But it wasn’t until I went to the shop on the fifth day and chatted to Sue the shop manager that the creative process reached a turning point. Sue was a catalyst, someone who provided me with a list of all the makers on the island, a picture of the history and economics of the island – all of a sudden the ideas started to flow. A bothy dweller can have the illusion of being in self-sufficient isolation until the nature of living in the place is reflected back with its complex network of social and material support.

“What are you interested in? Woodwork? Have you met Catherine and Pascal the basket weavers? You should go to speak to Carl the knifemaker who builds his own houses. Do you know we need a better supply of good quality firewood here – and in the old days there used to be hazel coppice up the back of Cleadale? It would be a great project to rekindle that practice.”

You never really know where an idea comes from, but streaming off that one encounter at Eigg’s social hub they started to emerge, bubbling up in my head. Amongst them was something I could build with my hitherto underused toolkit, lugged all the way from Edinburgh – an idea for a new improved bramble picker.

I felt the effects of the first three dreamy days immersed in the shape-shifting world of Sweeney and Eire/Alba mythology. Storytelling—prototyping. The twisted stick I had idly carved after the storm suddenly had a new purpose, stem bent using boiling water from Sweeney’s stove; a colander borrowed from Sweeney’s kitchen shelf became the bramble picker’s basket. There I had it, a multipurpose tool to maximise the bramble harvest potential in the short picking season. You can wield it like a jousting stick, fending off the briars, save your arm muscles by extending the pole right into the bramble bush and avoid losing all the best berries by picking directly into the pot at the end of the stick. I was dead pleased!

There was a challenge beyond that one – that of taking the hacker philosophy beyond the confines of the bothy – as even the noblest of cabins cannot ignore the land on which it dwells. What is the intense curiosity that motivates the maker who lives on such an island?

I paid a visit to Carl the knifemaker and his partner Katrin, who welcome me in. Carl is a maker of many things, including a circular wooden house and now a new curved wooden house. He seemed like the man to speak to about how to make my design from Eigg materials – and he was. His new house was built partly using pine trees felled from the site, and he just happened to have some slim offcuts left over that would be the very material to make the bowl of my blackberry picker. He also pointed me towards the spruce forest where I could cut a thin spruce root to sew the bowl together.

I also needed a wand of hazel from the below the base of the cliff at Cleadale. I could have sneaked off and taken one, but I was a guest on the island – why would I want to feel like a thief. I asked Eddie if I could cut some hazel and would I be able to make use of his workshop?

“Would you f*ck!” said Eddie in his deadpan way, a mischievous twinkle in his eye. “Yes, of course you can, help yourself! And if you go up the top of the croft, the big sycamore up there is well worth a visit”

My expedition to collect the last vital material for this new design was epic: an hour struggling through shoulder height bracken up the steep hill to the top of Eddie’s croft, in thick mist and drizzle. It was worth it though, the otherworldly hazel grove and the mighty sycamore felt like the land of the faeries, and in cutting a few wands I felt the need to offer my grateful thanks, thinking of the nuts of knowledge from the nine hazel trees in the story of Fionn Mac Cumhaill and the Salmon of Wisdom.

Once I had all the materials assembled, it was a case of setting to in Eddie’s workshop, borrowing his kettle from time to time for the bending process. There is nothing like the joy of creating things from green wood.

On our the last day of the trip, Jess’ leg had healed enough that she was able to hobble up most of the path to the Sgurr, with the aid of a stick cut from a fallen larch branch. We made it up to the base of the Sgurr itself, and I went of ahead to the top while she waited. On the way back down I thought of an old Gàidhlig saying:

Breac a linne, slat a coille

A fish from the river,

A stick from the wood,

And a deer from the mountain,

A theft no Gael was ever ashamed of.

Except, on a welcoming, community-owned island like Eigg, there is no need to thieve, only to ask.